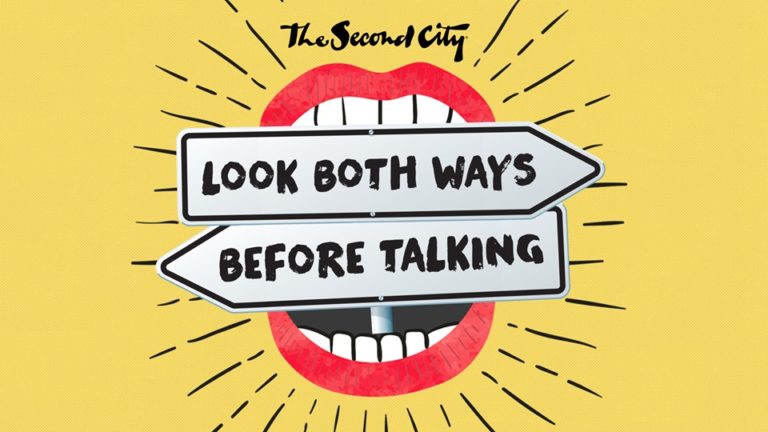 There was no better Valentine’s date than seeing The Second City roll through Iowa City with their political satire, sketch comedy, and improvisational comedy prompted by the none other than the show-goers. With no two shows being exactly the same, seeing The Second City live in person was an experience to remember.

During a two-day stint in Iowa City at the Englert Theatre, The Second City actors consisted of six people: Alison Banowsky, E.J. Cameron, Mark Campbell, Jordan Savusa, Jackie Southee, and Alessandra Drapos. To say the least, the six of them were amazing together and put on an amazing show. The chemistry between them all made the show enjoyable.

“Let someone else face your small talk fears head-on! Instead of avoiding Grandpa and de-friending your old high school pals, see The Second City’s brand new sketch comedy and improv revue, LOOK BOTH WAYS BEFORE TALKING,” their website reads. “We’re diving right into every touchy subject you’re thinking about, but are afraid to say out loud…or online.”

And they did not disappoint.

The show started off with a bang, with the six of them singing about being the number 1 nation in the world (it was political satire, in case anybody attending didn’t get that.) The show included all kinds of musical numbers, sketches, and mini-sketches that leaned on the political satire lines that made the room shake with laughter.

I’ve always loved improv comedy, as it showcases comedians true talent by being able to make situations up on the spot. Audience suggestions were hilarious to say the least, with some suggestions being the relationships “priest and confessor” and locations like “Lincoln, Nebraska.” As I write this out, it doesn’t seem nearly as funny as it did in the moment — another thing that I love about improv comedy. The suggestions thrown out and the reactions from the actors are what made it so funny and the scenes created a “You had to be there!” type of humor.

Other skits were more light-hearted, one being a doctor who slept with one of their patients — the punchline being “Dude, you’re a vetrenarian.”

Besides the short intermission about halfway through, it was a non-stop laugh fest, the kind that fills your chest and belts out unexpectedly. If you’re in need of a good laugh, look no further than The Second City. The live show environment is sure to cheer anyone’s day up.