Tags: 89.7 fm, album review, Echo and the Bunnymen, iowa city, Jen Goma, Kip Berman, krui, KRUI.FM, The Echo of Pleasure, The Pains of Being Pure at Heart, The University of Iowa, Vampire Weekend, Walk the Moon 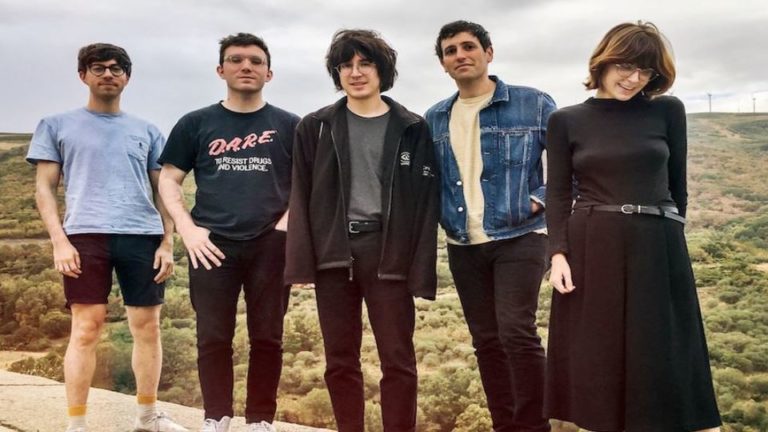 These words echo and swirl about a simple, essentially childlike synth line before a swell of guitar noise brings us to the first couple of lines of The Pains of Being Pure at Heart’s latest record: “If all your questions answer all the same / And all this tension makes the matter so plain / See you like sea blue from a desert shore / how much I need you, I just want you more,” (from the new song “My Only”).

Upon first impression, it appears as though the album is setting itself up for what the band usually does best–love songs that recall the likes of 80’s new wave with a necessary twinge of modern indie pop. Lyrically, though, it’s a bit more developed, as frontman Kip Berman considers the growing pains of adulthood and becoming a father.

There’s ebbs and flows–the high energy pop songs are soon followed by mellow acoustic sound and repetitive, melancholy lines, such as “I wanted to die with you,” (from “Anymore”). The album represents a relationship in that way without presenting the performative aspects intended for display to the public eye–which people are all too familiar with in a social media-centric world.

Instead of the narrative depicting a couple’s sparkling, honeymoon beginning or drowning in the heartbreak shown in so many albums of this genre, we are allowed to view the dulled out, comfortable shimmer of something sustained. If 2014’s Days of Abandon is the honeymoon phase of a relationship and its rushes of desire, then Echo of Pleasure is the cozier state of routine couch dwelling, empty beer bottles and takeout food.

Notably, POBPAH’s past works did a better job at conveying that polished post-punk sound with a hint of goth rock, while Echo of Pleasure comes off as a little sugary sweet. But it’s not always a bad thing–in fact, sometimes the best way to address somberness is with a smile.

Tracks such as the “The Garret” stand out the most, suggesting a strong nod to Echo and the Bunnymen’s “The Cutter” with its slightly off-rhythm guitar licks and screeches. Even Berman’s vocals seem to settle into a croon that sits deeper than his usual airy tone. Jen Goma’s (also of A Sunny Day in Glasgow) voice shines in “So True,” so much so that one feels a void in the the rest of the record without her prominence. Her soulful line, “If you don’t lose some skin for the things you believe / how can you know that you really do?” is hard-hitting and heartfelt, exhibiting the essence of the record, which is that of showing commitment and sticking around for the people and things we care about.

Reciprocally, “When I Dance with You” is a fun little dance pop jam with the continual “oh oh ohs” reminiscent of the band’s ever-popular hit, “Simple and Sure.” To the unfamiliar ear, the track’s vocals could be mistaken for something by the likes of early Walk the Moon or Vampire Weekend. It’s a good choice for a single as it appeals to and could even serve as a gateway to the radio rock crowd. The music video is swoon-worthy, too, with its fuzzy, retro televisions and psychedelic, spinning backdrops.

“It doesn’t look like a lot on paper,” Berman told NPR of the song, “but the sentiment is the underpinning of what love is.” In other words, sometimes affection can be felt at its deepest in the moments of just “feeling okay” (which also happens to be the chorus of the song) rather than in instances of intensity and novelty.

Overall, when it comes to achieving a record that is more accessible to a wider audience, Echo of Pleasure delivers. Older fans might be disappointed by the shift in the band’s progression in terms of sound, but will still find a track or two that stick to the band’s earlier roots.

Echo of Pleasure is available to stream on Spotify and Apple Music. The physical release of the record can be purchased here.