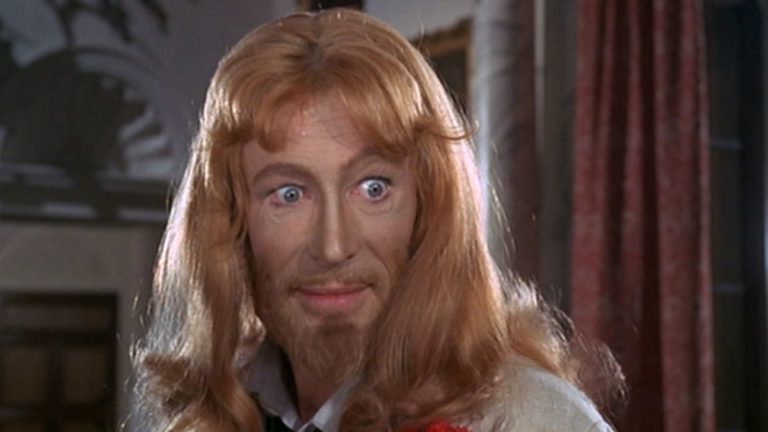 The Ruling Class, directed by Peter Medak, is a musical comedy from 1972 starring Peter O’Toole. The film is based off of a stage play by the same name by Peter Barnes, who also wrote the film’s screenplay. While appearing to be an irreverent farce by just reading the plot summary, the ends up being so much more.

The story follows Jack Gurney, played by O’Toole, who inherits the estate of his father after a bizarre death, who was also a member of the British House of Lords. When he returns home, the Gurneys are shocked to find that he is adamant in the belief that he is the second coming of Jesus Christ, and wishes to return the world to love and charity. Unfitting of a member of the aristocracy, Jack’s family plot to take the estate from him in any way they can.

As water is wet and as the sun is hot, Peter O’Toole delivers an Oscar worthy performance (though he would lose that year to Marlon Brando for his role in The Godfather). For the first half of the film he plays a seventies infused Christlike man with grace and humorous absurdity. He was good at being dainty, flighty and scatterbrained with a dash of unsettling innocence.

After the pivot point of the movie, about halfway through when the family goes to their most extreme measure to cure Jack of his paranoid schizophrenia, O’Toole’s performance is no longer just unsettling, it becomes frightening. His actions and words in the last half of the film sit in the pit of my stomach like a rock, and it’s truly uncomfortable as much as it is unforgettable, especially in one scene that is used in so many O’Toole montages, and for good reason. All I’ll say is that it involves a scream.

The rest of the cast performs well and don’t detract from the film, in any way. Each character is particularly slimy in their own way, especially Jack’s family members played by William Mervyn, Coral Browne and James Villiers.

With a run time of two and a half hours, The Ruling Class is almost twice as long as the average comedy and it hits harder. It’s an indictment of pretty much every institution one could shake a stick at from religion to government to the aristocracy. The Ruling Class pulls no punches. It is mean spirited and relentless in the rejection of establishment.

The humor, which is sometimes important in a comedy, is more often than not a slow burn in The Ruling Class. There are a few moments that are genuinely funny, and they’re all in the first half with Jack’s hi-jinks as Jesus Christ. Much of the comedy also stems from the crafty dialogue scattered throughout.

The Ruling Class does not feature many gut busting laughs nor does it feature a great deal of musical numbers (in fact there are only a handful) for a musical comedy. As a genre movie it is a black sheep, a beast of its own, in a league of its own.

Another facet of this film which is truly standout, is its imagery. The costume and makeup artistry on O’Toole in the first half of the movie gives him a striking resemblance to most Caucasian depictions of Christ. The shock therapy scene also features tremendous direction and visuals energizing it full of suspense and keeps the audience on the edge of their seats. Lastly, the ultimate scene of the film has a blunt yet effective visual to represent a certain set of the British establishment, and it resonates.

The Ruling Class deserves a spot in the pantheon of black comedy alongside Dr. Strangelove and Kind Hearts and Coronets (a film that I look forward to exploring later on). It is darkly humorous, sometimes shocking, often times uncomfortable, and altogether unforgettable.