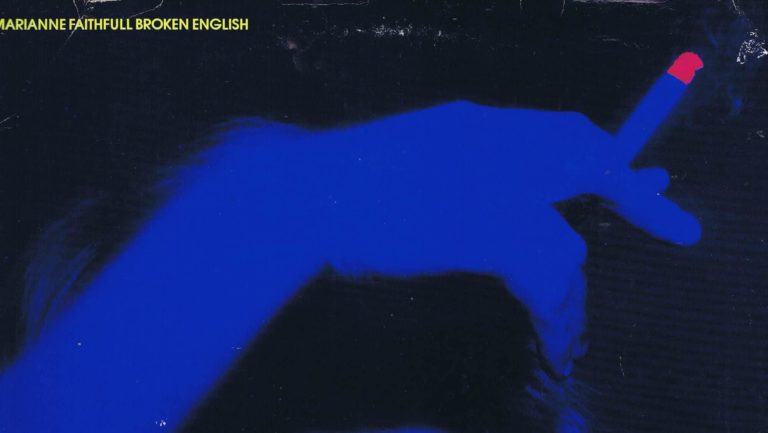 Marianne Faithfull, a popular British artist throughout the 1960’s and 70’s, released her seventh studio album “Broken English” in 1979. The album is widely considered her most successful after it rebooted her entire career.

When Faithfull first stepped her foot in the music industry, she played folk shows in coffee shops. As she began entering London’s social scene, she began meeting important producers and agents. Then she was discovered by Andrew Loog Oldham at a Rolling Stones release party. In 1964 she found herself writing her first big hit with Mick Jagger and Keith Richards titled “As Years Go By”.

After Faithfull ended her first marriage to John Dunbar shortly after giving birth to their child, she moved in with Mick Jagger. The two began a heavily publicized relationship, and Faithfull started using a variety of drugs once the couple became a large part of the London Swinging scene.

She was found wearing only a rug while the London police were conducting a drug raid at Keith Richards home. Faithfull says the incident destroyed her, and pointed out that when men were openly drug addicts it was commendable to act in this kind of way. “A woman in that situation becomes a slut and a bad mother”.

The Rolling Stones had previously written songs concerning Faithfull, specifically “You Can’t Always Get What You Want” and “Sympathy for the Devil”. Their song “Sister Morphine” sparked a legal battle, with Richards and Jagger releasing the song in their own name despite Faithfull being listed as a co-writer. This eliminated her chance of getting royalties or any form of payment for the song.

By 1970, Faithfull was homeless and battling a heroin addiction and anorexia despite having been one of the most famous singers in the UK and previously releasing 5 studio albums. She stopped making public appearances and attempted to take control of her addiction several times throughout these years. After losing custody of her son she attempted suicide but thankfully survived.

She got back on her feet enough to release another country album, “Dreamin’ My Dreams” (also titled “Faithless”), in 1976. Three years later “Broken English” skyrocketed her career once more. Faithfull calls it her masterpiece.

Since Faithfull was previously a country/folk musician, hearing an album so based on hard rock was a sharp stylistic turn.

Her voice also changed very much throughout her time living on the streets due to untreated illness such as bronchitis and laryngitis as well as smoking heavily. Her voice in “North Country Maid”, her fourth folk album released in 1966, is much higher and not raspy in the slightest. It lilts, and uses vibrato in her high notes.

However, in “Broken English”, her voice is very deep and extremely raspy. Since the album delves deeply into Faithfull’s drinking habits, drug addiction, and homelessness, this voice is the most emotional part of the album. It is a tangible way to see how this period in her life changed her. It shows us what Faithfull is really singing about.

The first couple of songs don’t get into Faithfull’s difficult experiences, but are still exemplary of her musical changes. The album starts out with the title track, “Broken English”, which was inspired by the terrorist group called Baader-Meinhof Gang. After Faithfull read and watched a documentary about a co-founder of the group, she was inclined to write this song to question their motives.

“Witches’ Song” has a much more uplifting meaning. The lyrics tell the story of a group of witches that find solace in one another. There is a definite feeling of hopefulness. The song ends with the lyric “remember death is far away and life is sweet”. This is a comforting sentiment from someone who once thought that their life wasn’t worth living anymore.

The next song, “Brain Drain”, begins to touch on Faithful’s drug addiction. Tim Hardin, one of the most popular American folk singers at the time, co-wrote the song. It was one of the last songs he wrote before he died of a heroin overdose in 1980 and is uncredited on the album.

The bridge of the song, “Got so much to offer, but I can’t pay the rent/I can’t buy you flowers ‘cause the money’s all spent”, speaks to me the most. Since an addict is no less of a person than anybody else, of course they have much to offer even if they can’t always act on it. This line seems like a foreshadow to the rest of Faithfull’s life. Even though she was still an addict when “Broken English” came out, it was a catalyst to her eventual sobriety.

“Guilt” is a confusing song for me, and probably my least favorite on the album. Faithfull repeats the kinds of crimes or wrongdoings she hasn’t committed, but would embrace if she had. She still feels like she’s done these things, however, which is causing her to feel guilty. I can see how, given her past, she would have a lot of experience with these mixed emotions. People often tell addicts that they are doing everything wrong, but it’s not always something that can be helped.

“The Ballad of Lucy Jordan” is a song written by Shel Silverstein, a famous poet and children’s book writer from Chicago. The song was originally written for and recorded by Dr. Hook & The Medicine Show and deals with the declining mental health of a housewife.

Lucy Jordan is looking back on her life at all the things she could have done but didn’t, since her life was devoted to her husband and children. “At the age of thirty-seven/she realised she’d never ride/through Paris in a sports car/with the warm wind in her hair”. The song ends with Jordan going to the roof of her building and supposedly committing suicide, but Faithfull says she prefers to interpret the ending as an ambulance ride to a mental hospital instead.

“What’s the Hurry” is one of my favorite songs on “Broken English”. I like the driving rhythm that persists throughout the majority of the song though I usually can’t stand repetition. There’s also a classic 80’s rockish vibe that was often in the music I listened to growing up that I love hearing. Guitar is also highlighted much more in this song which hasn’t been done much so far. Faithfull’s vocals are also slightly more impressive here.

Faithfull covers John Lennon’s “Working Class Hero” as her second to last track. The song is recognizable as Lennon’s since both Faithfull and Lennon’s vocals push to the forefront of their respective songs. Lennon’s acoustic delivery is lost on her album however. Her raspy voice and rockier musical accompaniment create an angrier mood from the song. This fits in with the rest of “Broken English” very well as Faithfull sings the story of her downfall.

The lyrical content in the final song, “Why’d Ya Do It?”, is the most different from all other songs on the album. The song vaguely samples Jimi Hendrix’s “All Along the Watchtower”. By my interpretation, the tune tells the obscure tale of a bird asking Faithfull why she let so many different people hurt her enough to put her on the streets. I’m not sure what the exact meaning of this song is, but it sees to be angry for the sake of being angry.

This week’s Woman Who Didn’t Get a List is Lizzo. A pioneer in the indie hip hop genre, Lizzo has founded several groups such as the Chalice, Grrrl, The Clerb, Absynthe and more. She has released one solo album, “Lizzobangers”, followed by an EP “Coconut Oil”. She was also featured on “BOYTROUBLE” from Prince and 3RDEYEGIRL’s album “PLECTRUMELECTRUM”.

Listen to “Broken English” by Marianne Faithfull and “Coconut Oil” by Lizzo below!