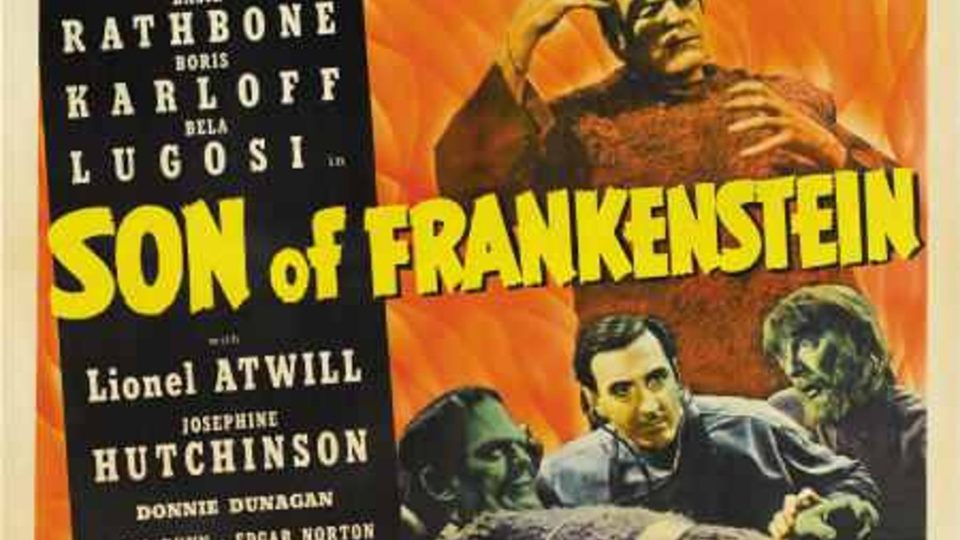 Son of Frankenstein is a horror movie from 1939, sequel to the evergreen monster movie Frankenstein. Telling a tale of mankind’s hubris and the horror of unchecked creation with the blunt force of a hammer, unlike the book by Mary Shelley.

The story follows the successful son of Henry Frankenstein, Baron Wolf von Frankenstein and his family as they move in to a town suspicious of his family name. Although he is eager for a fresh start, Wolf can’t help but be enthralled by his father’s papers and laboratory from his life changing experiment with the Monster.

Meanwhile a misanthropic old shepherd and grave robber named Ygor knows the secrets of the Monster, and plans to use Wolf to restore the Monster back to life and take revenge on the local town for hanging him.

The technical level of the film may not be mind blowing or game changing, but it retains the impressive makeup artistry of the previous films and the Monster looks as impressively inhuman and frightening as ever. The sets are grand and stylish from the massive castle to the creepy cramped caves around the laboratory.

The score is big and booming like most horror films of the day and serves as a superb exclamation point to each rise in tension.

Rathbone is suave and charismatic as Wolf, although while the story continues and he starts to crack, his performance also cracks and gets awkward in an inorganic way.

Lugosi, on the other hand, rocks his role as Ygor from start to finish. Dracula himself joins the film as another sinister character of a spiteful old man with the power of a monster at his whim. He plays the role of the crackpot old coot perfectly with a touch of menace in the right places.

Last but certainly not least, Boris Karloff returns in his signature role as the Monster. All the way down to his frightening growls and uncanny movements, Karloff embodies the terrifying image of Frankenstein’s Monster once again.

Now in the context of the present day, it’s worth discussing that there are two ways to watch this movie. The first way is to watch it for the movie itself and have a silver age scare; the second way is to examine the movie to see what Mel Brooks’ Young Frankenstein lifted from and parodied.

There’s a number of scenes and elements in Son of Frankenstein ripped off in Brooks’ love letter to the classic series: the inspector with the wooden arm, the use of music to control the Monster, just to name a few.

So in a way Son of Frankenstein serves not only as a continuation of the Frankenstein series, film royalty, but as setting the stage for one of the most brilliantly executed parodies of film ever made.

While it’s not a trend setter like the original or as recognizable as Bride of Frankenstein, Son of Frankenstein holds it own and with creations like Young Frankenstein, proves that it still has a satisfying amount to offer among the higher classics.

For more Basil Rathbone, check out The Hound of the Baskervilles and The Adventures of Robin Hood.