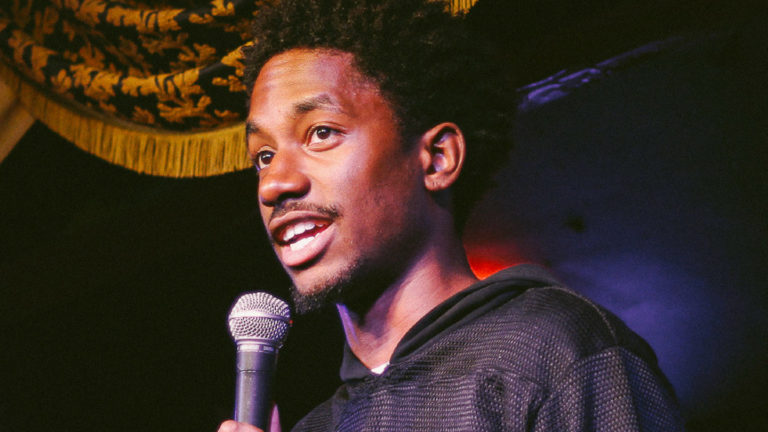 Saturday night, 15 minutes before the show started, The Mill was packed. Basically all the booths and tables were full anxiously awaiting the first of 3 acts to get on stage.

I was a little surprised at the turnout for the show, considering I thought Jak Knight was a little well known comedian.

She was funny, but her best jokes were always followed by a “right??”. Her set was short and the next thing I knew the next comedian was up on stage.

Sarah Sherman was the second opener. Everything about her was interesting, from her Guy Fieri flame shirt and pleather pants to her imitating her fathers New York accent.

I thought she was really funny (and raunchy), but the fake New York accent bit may have dragged on a tad too long. She started talking politics and I was worried that was all the show was going to be about, but luckily she was able to crack some jokes at her family’s expense to win me back.

Jak Knight is a comedian most recently known for his appearances in (and writing for) Lucas Bros Moving Co. and the new Netflix TV show, Big Mouth.

He is an up and coming comedian in the Comedy Central world and Iowa City was lucky to snag him for this years Witching Hour Festival.

He started out with a lot of political jokes, which scared me into thinking that I wasn’t going to like the show too much.

But then he warmed up to the crowd and got more comfortable telling jokes about random things like Usher having herpes.

For being the main act, I thought Knight’s set seemed a little short and I would have liked to hear more from him. Then I remembered, this is Witching Hour and there were more shows coming up at The Mill.

Seeing Knight live will definitely make me check out his shows in the future.