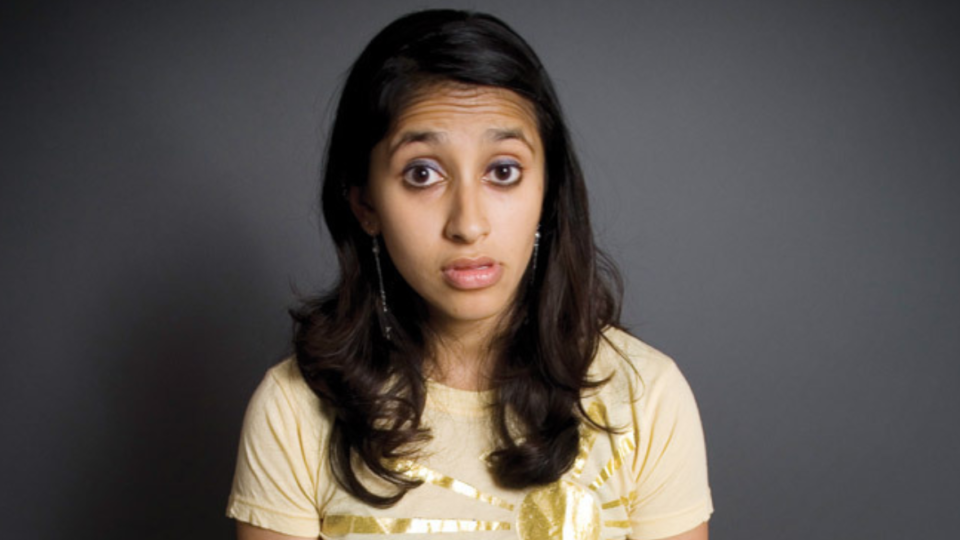 Aparna is quiet. Her audience is anything but that when she’s got the microphone in her hand.

Tonight I got the privilege of watching Aparna Nancherla on stage after seeing her on talk shows, Amy Schumer’s Inside Amy Schumer and TV shows like Master of None.

And she’s shyer than I ever knew. She came out on stage with a blue cardigan atop a dress decked in birds. She walks with her hands by her sides, and she looks down to the left speaker near her feet during her entire show.

When she does look up, you know its a moment you’re going to burst. She conditioned me so that when she lifted her eyes to the balcony during the show, I knew she was about to declare a killer line that would leave the Englert loud.

Nancherla makes shy jokes, too, like her FOMO: Fear Of Missing In. “I wonder what my apartment is doing while I’m gone” and her need to keep her coat on during parties so that she can make a quick escape, and keep warm since, you know, she runs a little cold. “I love to wear enough layers where people go, ‘does she have a figure at all?’”

When she finally did make a political joke, she apologised for it which only made the crowd laugh harder knowing how rare it was for her to come outright and say it.

Nancherla ends her set with a hilarious powerpoint including excerpts of emoji issues, her parents texts to her, and online dating screenshots.

But perhaps the most laughter in the crowd came from her simply reading off absurd Yelp reviews in her own tone.

You cant help but have a good and wholesome time at Nancherla’s show. Most of her jokes were clean, and honest, two things that can be more rare than ever in today’s comedic scene.