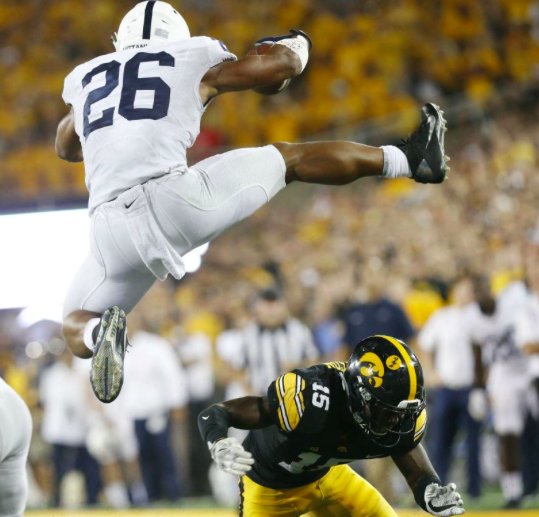 Once to a Penn State team with arguably the most dynamic player in college football. The other, at the hands of an improving Michigan State team. One came at home, the other in East Lansing.

Four wins and two losses at the midway point sets the Hawkeyes on track to equal last year’s record. Another eight win, four loss would be shooting par in Iowa City.

Although, these two losses have a different value. Both, through a fairly short connection chain, trace back to an undefeated team.

Penn State is simple, they are still undefeated. They’ve risen in the polls from fourth, the ranking given to them prior to traveling to Kinnick, to second after some losses above them. Only the juggernaut Alabama leads the Nittany Lion in the polls.

A close loss to Penn State helps. Obviously a win would’ve carried a greater weight but to play the number four team tough speaks as well.

The loss on the road against Michigan State is slightly more difficult to track. There is a middle man between the Spartans and the unbeaten. Michigan State has one loss to Notre Dame.

Notre Dame, who has snuck unnoticed into the top-15, also only has one loss. Theirs came at the hand

of Georgia. The Bulldogs are the other undefeated with ties to the Hawkeyes.

Both Georgia and Penn State are ranked in the top-three. Both appear, at least thus far, to have a team capable of competing with the Crimson Tide. It won’t be long until the “We Want Bama” signs appear on College Gameday from the Penn State or Georgia faithful.

Iowa, coming off a bye week, gets Northwestern followed by rival Minnesota. Only then do they face the challenge of handling Ohio State and undefeated Wisconsin. If 8-4 is the projected outlook, those are the two games that will drop.

They have their noted struggles but maybe this team isn’t all that bad. It’s a bold move to make but the Hawkeyes get someone every year. Ohio State and Wisconsin, one of them might end up on the wrong side.