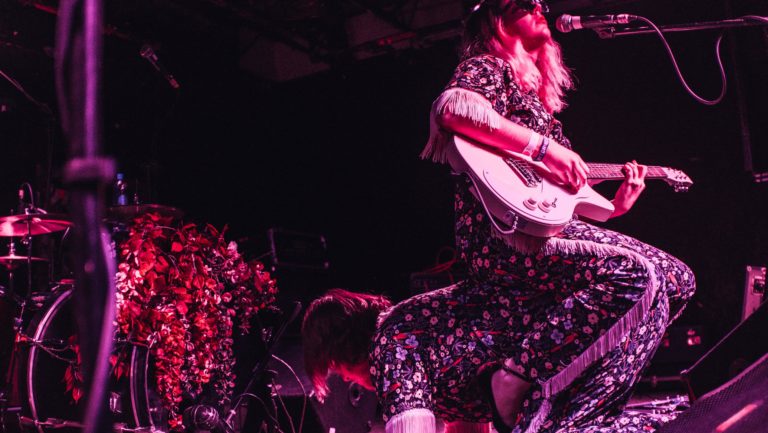 When I discovered Karen Meat was returning to Iowa City for Witching Hour 2017, I was elated. I reviewed the band two Mission Creek Music Festivals ago in 2016 when they opened for Caroline Smith. At the time, I wasn’t a huge fan of theirs, and it was one of the first shows I ever reviewed.

But early this last summer I rediscovered and fell in love with the 6 song EP they have on Spotify, “She’s Drunk Like the Rest of Us”. The lyrics are relatable and funny and unique. I have never found something that makes me feel like their music does. It’s perfect and blunt and emotional and poppy.

So I already knew that I loved Karen Meat’s music when I showed up at Gabe’s last night, October 20th, for their Witching Hour performance. There weren’t very many people that beat me there.

Maybe only five people were hanging out near the stage or at the large tables that line the sides of the room. The room did slowly fill up to around fifteen or twenty people by the time the set started.

The first thing Arin Eaton and Dana Telsrow did was sing the harmonies of their song “6-12-16” with their faces close, almost nose to nose. “Your eyes open up a sea of possibilities/when I look into them, I see a place I’d rather be.”

Their chemistry on stage was immediate. Watching them perform was like watching to two of them have a conversation, like they were just hanging out making music and not on stage. It really, really works.

When Dana finished a guitar solo, Arin says “good job” before she starts singing again, and he responds with a “thank you”. They came up with choreographic tricks to perform throughout their set. Arin took a sip of beer, waterfalled it into Dana’s mouth which he was hanging upside down below her, and sang the line “I cope with it by drinking/every single day” only for Dana to create the most extreme spit take you would have ever seen in your life.

They were fun with their audience, and their camaraderie didn’t seem closed off. Before they performed “Sad”, Arin told the audience to close their eyes, and she’d tell us when to open them.

When we did, Dana was playing the guitar with Arin between him and the instrument with her arms wrapped around to his back.

The songs are also incredibly relatable in a more realistic way than most music. While they are very much 60’s pop influenced, they also talk about depression and rejection and breakups.

“Remember a few hours ago when you broke up with me/in your sister’s front yard in front of your family/oh my god/that was embarrassing” is the intro lyric to “Drone”. “I want to barf on you” is the first line from “Sad”. They’re comedic and cathartic and happy while also in the pits of a depression.

It’s not like all of these are there to make up for a lack of actual talent either. Arin’s vocals are incredible and her voice is perfect for her music. Dana’s guitar solos are nothing short of musical genius, and are so versatile as well.

This performance did nothing but intensify my love for Karen Meat’s music. I will never listen to their music the same way as I have before. If they’re ever in Iowa City again, as they often are, I will one hundred percent be there.

Listen to Karen Meat’s “She’s Drunk Like the Rest of Us” below!