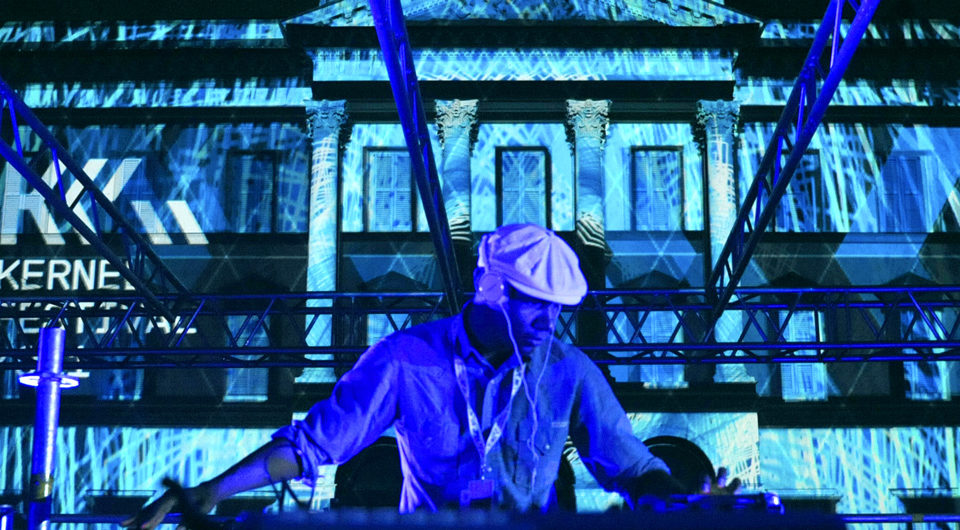 “This is a conversation between the arts and sciences.”
– Paul Dennis Miller, DJ Spooky

Stemming from his interest in the music genres of reggae and dub, throughout the years, Miller has created a series of compilations, remixes, and collections of material that his fans can only describe as “illbient” or “trip-hop.” Alongside working with influential artists such as, but not limited to, Yoko Ono and Thurston Moore, Miller’s music is simply something that can only be described as innovative.

Walking into the Englert Theatre, I didn’t know what to expect; however, I will admit that I was in for a show. Taking it upon myself to do a little research beforehand, I found the history behind Miller’s involvement in music not only interesting, but quite impressive as well.

From the very beginning until the very end, Miller was able to remix the sounds of the Van Allen Radiation Belts, alongside a string octet, with vintage stills, footage, and ephemera. Which, also subliminally educated the audience in pattern recognition, permutations, ice sonification, and algorithmic music notion, which in turn, is what Miller could only explain as the true beauty of the conversations surrounding both science and art.

Two years ago, The University of Iowa Libraries commissioned Miller to remix the collection of data surrounding the Van Allen Radiation Belts; however, Miller did more than just that. Instead, Miller carefully crafted a love letter to celebrate the University of Iowa’s steady involvement – fifty plus years – in the everlasting space race.

Through and through, Miller’s performance leaves me at a loss for words; however, I will admit that his innovative approach to both music and science paves the way for a bigger discussion to take place. Which, if you were in attendance at his performance, is the conversation regarding not only climate change, but global warming as well.

The simply beautiful and mesmerizing vintage stills of the world, specifically those of ice and water, Miller used within his performance not only cleverly approached the conversation of both climate change and global warming, but strategically as well. In a way, Miller not only brought about awareness regarding the stability of Earth, but the responsibility that lies on us to sustain the Earth.

With the climatic melting polar ice caps and devastating rise in global sea levels, Miller left not only me, but a vast majority of the audience as well, with a visual representation of the devastation we are leaving in our wake.

I applaud Miller and his musical creativity for it has left me in a state that constantly questions my every move either musically, or environmentally.

All in all, Paul Dennis Miller, DJ Spooky, is a performance that I will never forget.

Want to know more about DJ Spooky? Check out the links below!

Want to see more performances?
Check out the line-up for Witching Hour here!