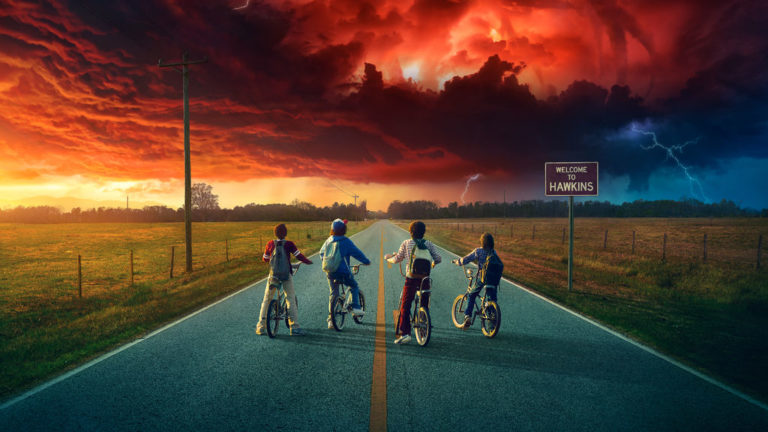 Halloween 2017 will bring its staples of candy-craving children, 60-year-old couples looking to reignite that spark, and the ensemble of awkward junior high dances.  What’s different about this upcoming fright night is anyone with a Netflix account has the opportunity to watch the long awaited season 2 of Stranger Things.

I first heard of Stranger Things in 2016.  It was a typical August weekday, as I impatiently waited to venture back to Iowa City for my sophomore year of college.  At the time, I recently finished my youth umpiring stint.  So, my days for the most part consisted of my ass stapled to the sweat-imprinted basement couch aimlessly browsing Netflix.

One morning, my friend, Logan Shelton, sent an emphatic text in which he declared me to stop what I was doing and watch a new Netflix original series titled Stranger Things.  Lucky for me, part one of that process was already complete. Now, all I needed was a case of diet coke and a frozen pizza to complete the tv watching experience.

Before the show’s titles, the first scene of the movie already caught my attention.  A group of middle school outcasts were piled in protagonist Mike Wheeler’s (Finn Wolfhand) basement.  Closed off from the outside world, these four friends gave it their all in a game of Dunces and Dragons; as I’m reminded with a gush of nostalgia of my 5th grade self glued to the computer chair playing RuneScape.

Speaking of nostalgia, this affection for the past is a tool the Duffer brothers establish throughout Stranger Things in an attempt to connect with a wide array of audiences.  Because of growing up in the 1980’s, the Duffer brothers allude to many of its science fiction and horror classics.  Even before watching any of the show’s content, one can easily see the similarities between the Stranger Things’ season 1 poster and the poster of a timeless series trying to find its place in the 21st century, Star Wars.

Throughout the first season, I sat back constantly in deja-vu as I was forced to recall previous moments I’d already witnessed in television.  From the adventurous, alienated quest of four ragtag boys in Stephen King and Rob Reiner’s, Stand By Me, to the uncharted territory Sigourney Weaver ventured through in Ridley Scott’s, Alien, and the naive, yet thought provoking first encounter in Steven Spielberg’s, E.T.

By referencing this canon of movies, the Duffer brothers were able to draw in a large audience who grew up with the likes of Spielberg and King.

Nostalgia not only played a role in reminiscing on past cinematic classics from the 70’s and 80’s, but also the decades’ music.  In the show, the audience is introduced to brothers, Will and Jonathan Byers, who share a connection through music.

Jonathan, being the older of the two and the father of the house, lectures Will through music.  All the questions that still loom over teenagers today: How do I know what I want to do with my life?  What will it take to become cool?  Why don’t I fit in with everyone?

To pass his messages down to Will, Jonathan used music for translation.  He made Will a mixtape of songs that strayed away from the popular sound at the time.  As a result those bands, like Joy Division, the Smiths, and the Clash, relayed the messages Jonathan was unable to say.

All I could think about when watching those sentimental scenes between Will and Jonathan was the relationship I have with my brother, Andrew.  We both constantly talk music, whether it’s on the phone, sharing a song through Spotify, or buying each other records to spin.  In this case, not only was arguably my favorite genre of music, 80’s alternative, a nostalgic moment for me, but also the dynamics of Will and Jonathan’s relationship.

Although the shows glorification of 80’s alternative rock played a major role in connecting people of similar taste, the show’s original score paved the way for the 80’s nostalgia category.

Arguably the most well known horror score in cinematic history was John Carpenter’s eerie, daunting loop of synthesizers in his 1978 flick, Halloween.  In order to continue this theme of nostalgia, the Duffer brothers hired Kyle Dixon and Michael Stein to score the show, with a focus on modeling Carpenter’s synth sound.

What came out of the deal was better than the Duffer brother’s initial expectations, since Dixon and Stein were completely able to reinvent Carpenter’s sound.  The show’s opening title sequences best establish the show’s ability to represent the trend’s creative peak.

To be considered timeless, one can either be completely original or build off previous styles and themes in order to take it in a different, more authentic direction.  Season 1 was able to remain atop the game primarily from nostalgia.  But in season 2, let’s see what new path the Duffer brothers take in their quest to stand the test of time like their childhood idols.