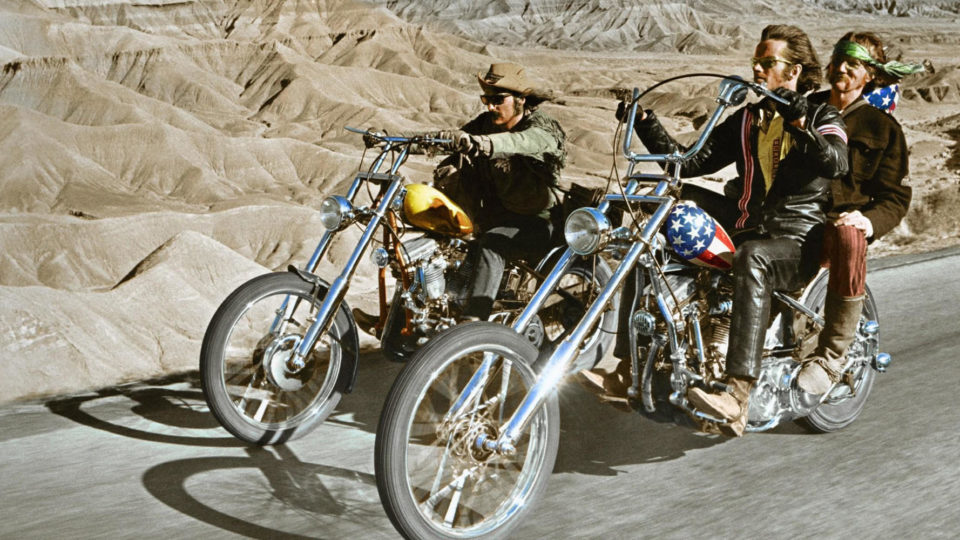 Ever since Jack Kerouac wrote On The Road, America fell in love with the splendor, rebellion, and adventure associated with road cinema. Conflicts within human consciousness took place between conservative values and rebellious desires. At the essence of the cult classic, Easy Rider, was a tension between long-standing tradition and ever-changing modernity.

The road movie documented the rise of counter-culture in a way that dated Westerns, Hollywood heroes, or European art films could not. The French New Wave promoted a revolutionary experimentation with editing, conscious rejection of literary tradition, aesthetic documentary styles, and narrative ambiguity. Early road cinema was influenced by that French New Wave. It used heterosexual couples, displaced families, and masculine fantasies to forge episodic escapes. Road cinema was categorized as coming-of-age films focused more on the journey than the destination.

Easy Rider documented the Hippie movement, rampant narcotic sales, and faux utopian communes that came into fruition in the 1970s. Road cinema was known for its dissolute men who become buddies over the duration of their adventures. There was a cinematic reliance on the landscape to establish the direction of the film. Narrow highways collided with a distant blue sky, rusty telephone poles stood amidst vast deserts, motorcycles were hidden behind a cloud of dust and debris. It formed a spectacle that was breathtakingly alluring. The road stood as a tableau for freedom; a terrain yet to be discovered.

Two bikers, one the reincarnate of Captain America and the other a reincarnate of Davey Crockett, smuggled cocaine from the borders of Mexico to inner-city Los Angeles. A posh Rolls-Royce riding dealer bought the drugs for a large sum of money. It would later be stuffed into two California-style choppers and ransomed across the country.

Wyatt (Peter Fonda) and Billy (Dennis Hopper) hit the road in search of a new frontier. With their destination set on New Orleans, the two buddies confronted alcoholic prisoners, traditional farmsteads, hippie hitchhikers, free love, gateway drug theories, and communes that seemed to be more misleading than the American Dream.

Wyatt and Billy were staged as radicals with their leather jackets, long hair, conspicuous shades, cowboy boots, and overgrown beards. Which, formed a facade overall. It was almost as if they wanted society to resent them as much as they resented themselves.

George (Jack Nicholson), an American Civil Liberties Union lawyer, befriends Wyatt and Billy and frees them from prison. George calls himself a “true” American. In truth, he does not know who he is. George fears that his freedom is in the hands of a radical movement when it is really in the hands of change.

“George is a handsome, alcoholic young lawyer of good family and genially bad habits, a man whose only defense against life is a cheerful but not abject acceptance of it,” said the New York Times. “As played by Nicholson, George Hanson is a marvelously realized character, who talks in a high, squeaky Southern accent and uses a phrase like ‘Lord have mercy!’ the way another man might use a four-letter word.”

When George was brutally murdered, Easy Rider could not recover, similar to its two main characters. The scene around the campfire led to their realization that America was not the land of the free or the home of the brave.

“[George] is completely happy and, ironically, the only person in the movie who seems to have a sense of what liberation and freedom are,” said the New York Times. “There is joy and humor and sweetness when he smokes grass for the first time and expounds an elaborate theory as to how the Venutians have already conquered the world.”

Wyatt and Billy tried to rationalize the death of George with senseless profanity, distorted memories, ravaging sex, social alienation, and moral ambiguity. This rationalization ended when Wyatt said, “We blew it,” near the end of the film.

Wyatt knew that their behavior did not foster any spiritual fulfillment or societal acclaim. Their actions further distanced themselves from freedom: retirement in Florida. Wyatt could not find America. That admission was hidden underneath his anti-establishment rhetoric, brooding pessimism, and reckless ambition.

The conventions in which America functioned were abandoned in Easy Rider. This was evident in the bordello scene, which acted as their literal arrival to New Orleans. Over the duration of their journey, Mardi Gras transformed from a place to a state of mind.

When Wyatt and Billy arrived, Mardi Gras turned out to be a detrimental disappointment. Wyatt said to the prostitute, “You know on the street what is happening?” This showed that he still held onto a past that never existed, a form of nostalgia rooted in regret. He acted as if to keep alive the innocence sacrificed in route to New Orleans.

On route to Florida, Wyatt and Billy abandoned the commune. Two Rednecks followed close behind in a truck. As Billy raised his middle finger in a siege of rebellion, one red neck shot him in the chest. Billy landed on the side of the road as the truck drove into the distance. Wyatt draped his American flag jacket over a dying Billy. His last words, “I’m gonna get him,” immortalized his delusion.

Wyatt drove after the truck in a last ditch effort to avenge the death of his buddy. The redneck shot Wyatt, blew up his motorcycle, and continued on in the direction of Florida.

Films do not become Cult Classics based on the questions they answer but rather the questions they pose. Easy Rider is an example of a cult classic that transcends the boundaries of time. It is a stark reminder that life is consequential, rebellion is rarely self-evident, and freedom takes more than it provides.