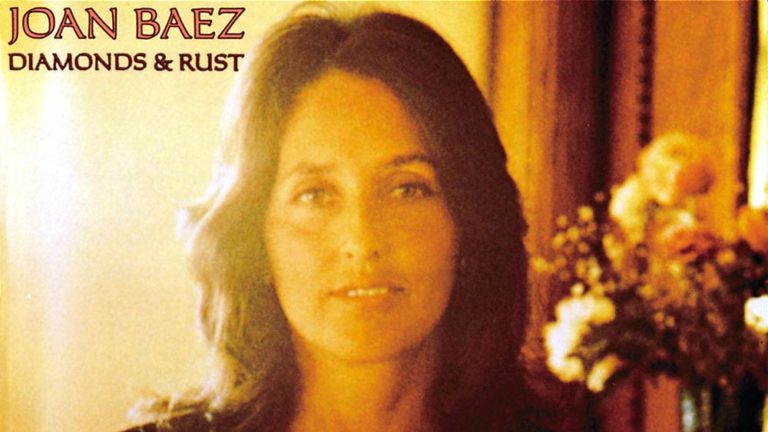 Hello, friends! It’s Elaine and I am back with another installment of Stella.
This week I’ll be talking about one of the most influential women in music from the 1960’s and 70’s, Joan Baez.

Her album “Diamonds and Rust” was released in 1975 near the end of her singing career. Majority of her recognition before said album was solely focused toward either her covers or interpretations of other musicians’ songs. Which, were predominantly men. While this album also contains many renditions of different artists’ songs, Baez begins to focus on her own songwriting and what her voice can say that others cannot.

Baez worked closely with Bob Dylan throughout their romantic relationship that spanned throughout the first half of the 1960’s. The only album I have of hers is a compilation of the different songs she covered of Dylan’s. Baez didn’t start to delve into her own sound and singing her own words until she released “Diamonds and Rust,” which became the main reason it was placed on National Public Radio’s (NPR) list of 150 best women-led albums.

I haven’t listened to any music that Baez wrote on her own and I don’t know much about her personality; however, I do know that she changed the 60’s with her voice and her activism. I also know that Jenny from Forrest Gump wanted to be just like her and that she performed at Woodstock along with many other amazing and influential artists.

Joan Baez spent a good portion of her life trying to make the world a better place through her music. She performed the civil rights anthem “We Shall Overcome” at the March on Washington in 1963. She also sang the same song at the Free Speech Movement protests at the University of California, Berkeley, which took place the following year.

She participated in the Selma to Montgomery marches which advocated for the right of African-American’s to vote in 1965; the year after she founded the Institute for the Study of Nonviolence. She participated in numerous anti-Vietnam war protests, such as a free concert at the Washington Monument, which drew 30,000 people. While traveling to Vietnam as part of a peace delegation, she was caught in the “Christmas Bombing,” an eleven-day bombing of Hanoi in Northern Vietnam.

Baez has remained an activist up into the 21st century, speaking out for LGBT+ rights, against the death penalty and false incarceration, and against the United States’ invasion of Iraq. She wasn’t afraid to use her voice to change lives for people across the world or in the United States. She is respectable and strong and I admire the brave things she has dedicated her life to doing.

From the first track of “Diamonds and Rust,” her voice steals the song away. Even though the song is a little overpowered by the instrumentals, her voice permeates other sounds that layered on top of it. Since Baez initially built her career covering other artists’ music, it is only natural that her voice has stood out in a successful manner. There’s something about the lyric, “the Madonna was yours for free,” that gives me chills.

The meaning of “Diamonds and Rust” centers around Joan Baez’s relationship with Bob Dylan. The song narrates her feelings and memories as Dylan calls her about ten years after the events later sung about occurred. The song has a much more bittersweet undertone once I listen to it again with that knowledge. It is beautiful.

The next song Baez wrote for her own album doesn’t appear until about halfway through the album itself. “Children and All The Jazz” is really overwhelming to me. It doesn’t fit my tastes as much as the rest of her own songs, mainly because it doesn’t feature her amazing vocals.

“Winds of the Old Days” comes a few song later and it suits my own pace much more. It gives off the feeling of floating away and letting the past be over. Something very nostalgic comes from this song. There are some lyrics of her’s that really stand out from this track, such as, “Unguarded fantasies flying too far, memories tumbling like sweets from a jar.” Which, comes before “the winds of the old days will blow through my hair.”

The second to last song, “Didi,” is a duet between Joan Baez and Joni Mitchell concerning how the world got so lucky. I love this song despite the lack of actual lyrics and deep emotional reaction since it’s sole purpose is to showcase their beautiful voices.

The other songs on this album are covers by artists such as Bob Dylan (of course), Janis Ian, Stevie Wonder, John Prine and many others. They also sound absolutely amazing and I can definitely understand why the claim to her fame before her own songwriting was interpreting songs that weren’t her own. Her voice is enough to make anything about ten million times more meaningful and emotional.

My favorite tunes of these are her medley of “I Dream of Jeannie/Danny Boy” and “Never Dreamed You’d Leave in Summer.”

Something I want to start doing at the end of each “Stella” article is hyping up another powerful woman (in music or otherwise) that didn’t get a top-150-of list. This will be an amazing way to discuss even more women of different professions and walks of life that otherwise might not get as much recognition.

This week, that woman is Jen Kirkman, a comedian and writer that I’ve admired since I saw her stand up at last year’s Witching Hour Festival in Iowa (read my review of the event here). I anxiously await the newest episode of her podcast called “I Seem Fun” each week because her commentary on the world, politics, and the teeny tiny struggles of daily life makes me feel real again. Her Netflix specials are also hilarious, particularly “I’m Gonna Die Alone (And I Feel Fine).” I highly recommend watching or listening to her to treat your life.

Go ahead and listen to “Diamonds and Rust” on YouTube or Spotify below!

Stella is a column surrounding analysis and appreciation of the 150 albums chosen by NPR as the best created by women thus far. Each week I choose an album from this list I’ve been wanting to listen to that either peaks my interest or seems like an essential thing to listen to and write about. The column’s goal is to provide female identifying readers with the empowerment that can only be obtained through a badass woman and her amazing music.