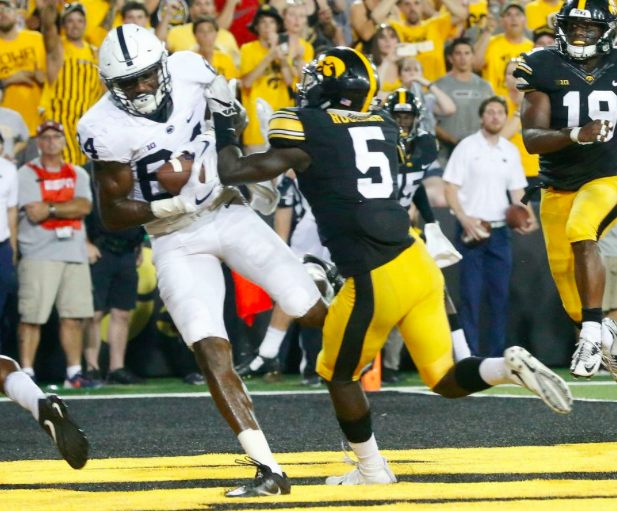 IOWA CITY – Putting a game like this into words is often much easier said than done, but here goes nothing.

Penn State, with no time left on the clock, beat Iowa 21-19 on a seven-yard reception from Juwan Johnson.

“That game is illustrative of what it takes to win in the conference,” said Iowa Head Coach Kirk Ferentz. “We’re disappointed with the loss; its going to hurt for a while, but we’ll move on.”

As the game neared its close, flashes of the Michigan game from 2016 began to swirl in the heads of Hawkeye fans. Instead, the heartbreaking loss forces fans to recall the 2015 Big Ten Championship Game versus Michigan State.

In that game, it was L.J. Scott who reached over the goal line with under a minute left to shock the Hawkeyes. This time, it was Trace McSorely and Juwan Johnson.

The Hawkeyes had a lead over No. 4 Penn State with under a minute to play, even after sputtering offensively in the first half. That’s because the Iowa defense rose to the occasion yet again.

In the first half, the Iowa offense had absolutely nothing going, and the defense was forced to be on the field for nearly 20 minutes. Even on short rest, they held the Nittany Lions in check.

The defense surrendered just three points in the first half even though they allowed 219 total yards. When it came time to make big plays, the defense was making them.

After forcing a three-and-out mid-second quarter, Penn State pinned Iowa at the one-yard line, where Akrum Wadley was dropped in the end zone for a safety, making the score 5-0. On the next drive the defense forced a turnover on downs at their 32-yard line, but again, the Iowa offense was forced to punt.

With under a minute to play in the half, the defense came up big again. Sam Brincks forced a quarterback hurry, and Josey Jewell picked off a pass and returned it 33 yards to the Penn State 21-yard line.

On the next play, Nate Stanley found Nick Easley for just his third completion of the game. Just like that, the Hawkeyes were taking a 7-5 lead into the locker room.

In the first half, the Nittany Lions possessed the ball for nine more minutes than the Hawkeyes, outgained the Hawkeyes by 165 yards, and had nine more first downs. Yet, they trailed at the break.

Jewell and the defense held their own in the first half and competed hard in the second half, but one player made the difference after intermission.

That player was Saquon Barkley.

The Heisman hopeful was held to 63 rushing yards and 47 receiving yards in the first half. For Barkley, these numbers are relatively low. It was in the second half that he truly found his rhythm.

Barkley finished the game with 305 yards from scrimmage – 211 rushing (a career high), 94 receiving.

“He’s a good player,” said Brincks. “He’s a Heisman candidate for a reason.”

Barkley’s signature play came mid-fourth quarter. The running back caught a screen pass, then hurdled over would-be tackler Josh Jackson. Amani Hooker lowered his shoulder into Barkley while he was in the air, but Hooker just bounced off. Barkley landed on his feet and picked up four more yards for a first down.

It’s those plays that define a Heisman season.

Barkley only managed to find the end zone once in the game on an eight-yard touchdown run to put the Nittany Lions up 15-7. The drive was set up by a fumble from Akrum Wadley.

Wadley more than made up for his mistake. Five minutes later, he caught a pass from Stanley and took it 70 yards up the field for a touchdown, diving through two defenders to reach the end zone. Iowa trailed 15-13 after a failed two-point try.

With under two minutes to play, Wadley struck again.

The defense held as Anthony Nelson blocked a short red zone field goal with 2:42 on the clock. Working quickly, the offense drove down the field, and Wadley capped the drive with a 35-yard run through the left side.

Hawkeyes in front, 19-15. Jubilation inside Kinnick Stadium. Another monumental upset under the lights was imminent.

Or so it seemed.

McSorely led the Nittany Lions down the field, completing seven of his 11 passes to pick apart the Iowa defense that had caused him so many problems all night. With four seconds left, McSorely found Johnson for the game-winning score as the ball sailed no more than a centimeter above the outstretched hands of Hooker.

As the Hawkeyes left the field, they were treated to a standing ovation from the home crowd.

Effort and heart recognized and appreciated.

Many fans stayed standing in their seats for more than 10 minutes after the game ended. It hadn’t sunk in yet.

“This game sucks, but you have to move on from it,” Jewell said somberly in his post game conference.

If you go look at a box score and leave scoring plays aside, one would think Penn State bowled over Iowa. But under the Kinnick lights, statistics usually take a backseat to grit.

“The guys expended a lot tonight,” Ferentz said. “Win, lose, or draw you’ve got to move on and make sure we don’t miss an opportunity next week.”

Losing sucks. Nobody says it doesn’t. But the Hawkeyes looked good against one of the top teams and top players in the country. That’s encouraging moving forward.