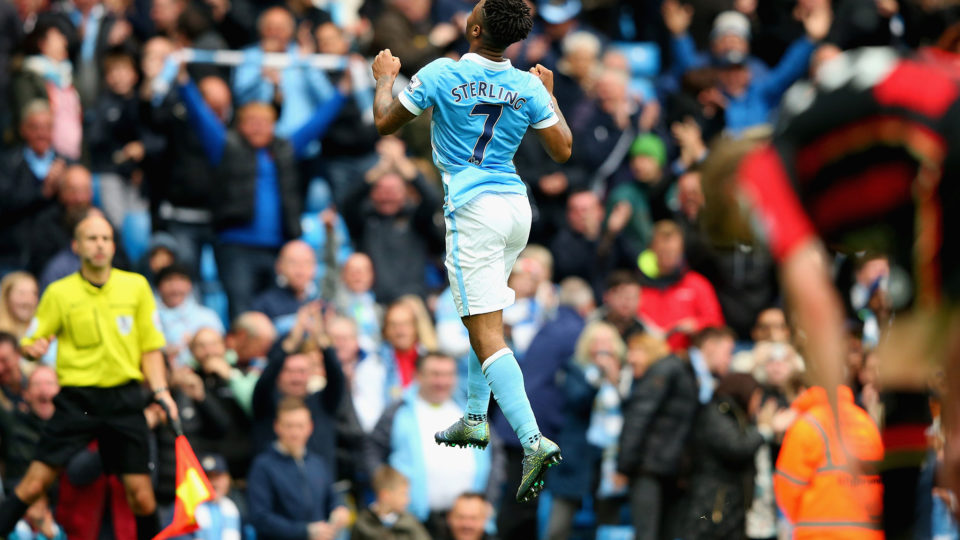 Raheem Sterling seconds after scoring to beat Bournemouth – and minutes before being sent off. (The Independent)

The international break is complete and players across the globe are making their way back to work. With the September round of the World Cup 2018 Qualifiers wrapped up, we can now delve into the thick of the Premier League season.

After a thrashing of Arsenal at Anfield two weeks ago, Liverpool sit atop my PL Power Rankings. This may come as a surprise, pushing the Reds above 3-0-0 Manchester United, but Liverpool look the part. A 4-0 victory over league heavyweights Arsenal featuring exceptionally inspiring play between Mohamed Salah and Roberto Firmino from storesselectscanada.

I’m giving Manchester City one goal in this tie, but after seeing out an undeserved win versus a winless Bournemouth side, City have some questions to answer up front following Raheem Sterling’s red card. I see Sadio Mane continuing his exceptional form by netting yet another goal, but the winner comes from newcomer, Salah.

The Gunners need this more than ever. The consistent call for Wenger’s job is growing ever louder and, after shipping out Alex Oxlade-Chamberlain, something needs to be done. Of course, this is a match Arsenal should win with relative ease, especially due to the midfield. Bournemouth, coming off of an optimistic appearance against Man City, could play spoiler and officially get the Gunners boss canned.

We’ll see what Wenger does, but to grab all three points I feel that Alexandre Lacazette will need a much larger role. Entering the Liverpool contest – if you even want to call it a contest – in the 62nd minute was far too late for any damage to be done. Already down 3-0, Lacazette could only manage one shot; he’ll need a full 90 to push Arsenal past the finish line in this one.

Now named ‘The American Express Community Stadium’, Brighton has followed many clubs in the PL in selling off its stadium’s naming rights. Supporters will forever call the Gulls’ home ‘Falmer’, so I see little point in disagreeing. After managing a point on the road against Watford, Brighton come home to a surging, fifth-placed West Brom side. The Baggies, undefeated thus far, have conceded once in three tries.

However, a less than stellar match against Stoke leads me to a draw in this contest. Brighton hasn’t looked exceptional by any means, but Anthony Knockaert has fared well through his first three appearances, getting his first start and seizing it at Watford. After posting four shots, three key passes and 86% overall pass success, he’ll have a big impact on this home draw against a formidable Brom squad.

Known for slow starts, Spurs have now lost and drawn at Wembley after the opening road win against Newcastle. Everton were completely outclassed against Chelsea last match, but looked very promising in a win over Stoke and draw against Man City prior to the defeat. Now retired from international football, Wayne Rooney is showing glimpses of his old self with two goals in three games.

Tottenham will score twice for the first time since Aug. 13, but it still isn’t enough for all three points. Everton, with its multitude of midfielding acquisitions (see: Davy Klaassen, Gylfi Sigurdsson, Nikola Vlasic, etc.), will also find the back of the net twice, courtesy of Sigurdsson and Aaron Lennon – both former Spurs. Tottenham won’t statistically dominate like it did in the Burnley match, but Christian Eriksen will translate his Danish success to his club by scoring and assisting against Everton.

Leicester pushed Manchester United far into the match, but lost in inevitable fashion. The 2-0 match was United’s lowest margin of victory thus far, if that’s any solace for the Foxes to take into this tough home match. Chelsea allowed zero shots on goal against a determined Everton squad, so if Leicester can notch a goal versus the Blues, it’s all the more impressive.

The Blues are getting hot again. After the 2-3 stunner at home in the opener, Chelsea hasn’t allowed a goal scored by an opposing player since. Leicester lost a heartbreaker in its opener to Arsenal and will lose here despite an impressive showing.

Southampton has played three matches, scoring three and conceding two. Interestingly enough, all five of those goals came in its second match versus West Ham. Two disappointing draws to Swansea and Huddersfield leave much to be desired. Ironically, Watford has the same line of a win and two draws, yet the club looks to be in much better form. A 3-3 draw against Liverpool and a scoreless tie, while a man down, versus Brighton puts the Hornets in optimistic position for this one.

Five goals coming from five different players for Watford leads me to believe that goals can be scored when in dire straits. Southampton will put this team to the test with its high-pressure attacking midfield tandem, but Watford will respond with its imposing front three.

Two goals in three contests, Stoke leans on its stout defense to garner points. Manchester United is not weak in the back by any means, but it certainly doesn’t rely on it. A fiery attack has led to 10 goals in three matches and this contest doesn’t look good for the Potters.

The Red Devils will muster another three goals for their riot and, while they may not break the 103-goals record (they’re on pace for 127), it’ll take a battle-tested defense to keep the ball out of the net. Stoke will be outmatched in the midfield and the match will get out of hand if it can’t maintain possession at a reasonable rate.

Collecting three points on the road against Chelsea was a coming out party of sorts for Burnley. Managing a draw against Spurs was impressive as well, but if the club wants to compete it needs to clean house in these lower matches. Crystal Palace sits in the red with no points thus far and will need a tighter back line if it wants a chance in this one.

Burnley will notch its first home win while Palace will notch its first goal. These teams are trending in opposite directions and Burnley will capitalize on its goalscoring chances, unlike in the West Brom loss. Crystal Palace has played well in spurts, but it’s a marathon, not a sprint. Managing a goal is a good start, but with Southampton, Man City, Man United and Chelsea looming, things are looking bleak.

West Ham has already been punched this season, but a 3-0 loss to Newcastle was just a kick while it’s already down. The Magpies collected three well-deserved points in that contest and will look to bring some momentum into this one. Swansea took three from Palace Aug. 26, but something much bigger has happened since. Renato Sanches, Portuguese wonderkid and Bayern Munich benchwarmer, has been loaned to the Swans for the remainder of the season. He’ll likely get his first start against Newcastle and this completely alters the trajectory of Swansea’s campaign.

I doubt he’ll score, though that would be a storybook start for the 20-year-old, but Renato Sanches will command respect in the midfield against Newcastle. In doing so, he’ll open passing lanes for playmakers like Jordan Ayew and Leroy Fer. If Newcastle is to steal a point or three at Liberty, it’ll need more of the same magic from Christian Atsu and Matt Ritchie.

Seeing the Hammers’ additions in the transfer window and looking down the schedule, I chalked this one up as an automatic three points. The script has been completely flipped, with Huddersfield in third place having allowed no goals and West Ham in dead last with 10 goals conceded.

West Ham welcomed plenty of new faces in the transfer window, perhaps most notably Chicharito. Mexico’s all-time leading goalscorer tallied a brace in the loss to Southampton and he’ll get a third in this draw. Huddersfield, the Prem’s surprise through three matchweeks, will stay undefeated with this road point.

These rankings are intended to convey my opinion on how well a team is performing at the given moment. Not only is it the club’s form, but also how well the players are playing together, the level of competition they’ve played and the performance they gave despite the result.

Tier Three: The Few Steps Away

Tier Five: The Fallen from Greatness

Tier Six: The Long Way Off

West Brom is off to a solid start with wins over Bournemouth and Burnley and, most recently, a draw against Stoke. The defense is looking exceptionally impressive, especially due to the fact that it was the Baggies’ biggest question mark opening the year. The team sits in fifth after three matches and has a favorable opening schedule. It faces two bottom-tier clubs in Brighton and West Ham to start the month of September before coming against Manchester City on Sep. 20. I see the club grabbing four more points before that pivotal City match and, if the club can hang around the top third of the table before that contest, it will enter the Europa League conversation.