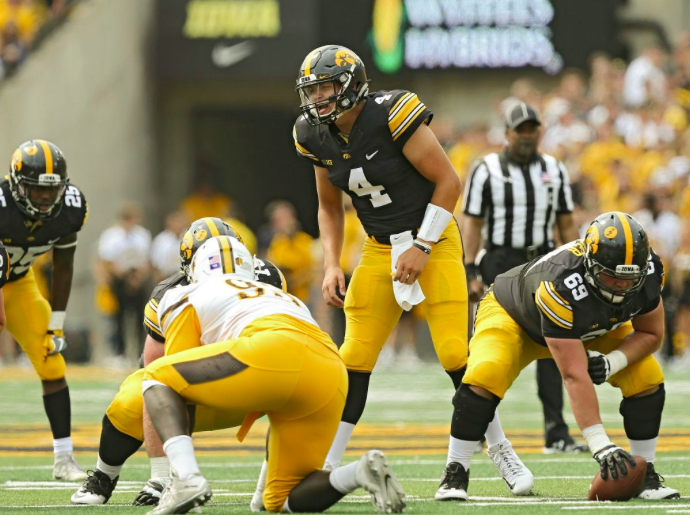 IOWA CITY – It wasn’t an ideal start, but new Iowa quarterback Nate Stanley got the job done in his first career start on Saturday.

After not completing a pass in the whole first quarter, Stanley settled in and connected for three touchdown passes to lead the Hawkeyes to a 24-3 win over Wyoming.

“I was really impressed with him,” said Iowa Head Coach Kirk Ferentz. “He went through some tough times out there… The whole team responded to the bumps, but I thought he did too.”

It certainly wasn’t the cleanest game ever played by an Iowa quarterback, but a first-time starter is always going to have a learning curve.

Stanley was 0-for-4 passing with an interception in the first quarter. Not an ideal start by any means. Nick Easley’s 19-yard reception with 11:21 left in the second quarter was the first completed pass of the game for Iowa. After that play, Stanley was 7-for-10 passing.

“For Nate to make those kinds of throws, especially coming off a couple bumps, that says a lot about his makeup,” Ferentz said.

Later in the same drive after Easley’s first catch, the Hawkeyes went for it on fourth-and-goal at the Wyoming two-yard line. Stanley rolled right on a play action fake and hit tight end Noah Fant for the first touchdown, putting Iowa up 7-3.

“I know that at that point we had the run game going a little bit, we just wanted to run a play that we know we’ve always gotten a couple of yards on in practice,” Stanley said. “We had a lot of confidence in that play call.”

After a botched punt from Wyoming, Iowa got the ball back with 23 seconds left in the first half. Stanley hit Fant on a vertical route for a 32-yard touchdown, putting Iowa up 14-3 at half.

Stanley connected with Easley in the third quarter for a 45-yard touchdown after Easley fought off a tackle at the five-yard line. In his Iowa debut, Easley led the team with four receptions and 77 yards.

With three touchdown passes, Stanley became just the third Hawkeye since 1999 to have three or more passing touchdowns in his first start. The other two are Jon Beutjer (4, at Indiana in 2000) and Ricky Stanzi (3, vs Florida Atlantic in 2008).

The Hawkeyes won 24-3, but miscues could have made the game much closer. Iowa’s defense held strong, even after the offense committed four turnovers on the game. Stanley had three of the turnovers with an interception and two fumbles. Freshman receiver Ihmir Smith-Marsette had the other on an end-around.

“I feel like I’m kind of a perfectionist, so I’m a little upset with some stuff that went on with ball security,” Stanley said.

There was good and bad from Stanley in his first start. His teammates know that things will get fixed over the next week of practice, but they were pleased with the demeanor of their young QB.

“He was very composed, ran the offense well and threw some good balls today,” Fant said. “I think he had a really good game.”

A new quarterback, a first-time play-caller in Brian Ferentz, and lots of young receivers usually lead to miscommunication and ball security problems in week one. All things considered, Stanley had a good, but not great, debut. He knows it, and the team knows it.

“Obviously our offense has things to improve on so we’re going to get back to the books,” Fant said.

The most important stat is that the Hawkeyes moved to 1-0 in the Nate Stanley era. He’ll get his first road test next week when the Hawkeyes travel to Ames for the Iowa Corn Cy-Hawk Series rivalry game. Game time is set for 11:00am on ESPN Networks.