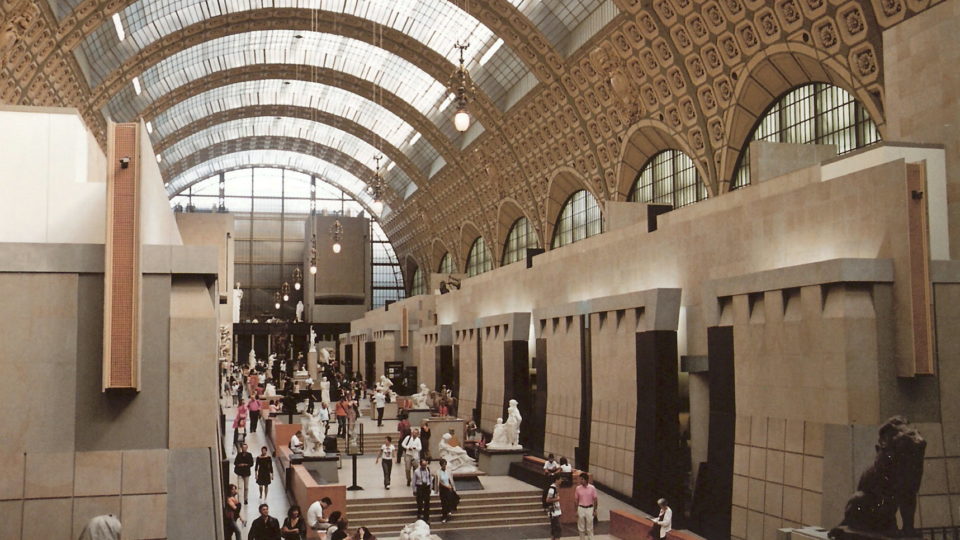 In the last article, I spent lots of paragraphs on the tour de Eiffel and my host family; I ran out of spaces to complete the part about museums. Paris has around 130 museums within the city; my student ID has a free access to all museums, so I’ve been to about five museums such as Chateau de versatile—covers the history of the artifacts and castle itself. Most of the museums are about art or history.

It is a complex building which has an outlook of circuit water pipes, located on the 4th arrondissement of Paris in the old Marais. Our CIEE center, where we met for classes, was four metro stops away from the Pompidou. Once I even went to the Pompidou to do my reading for class. The Pompidou center consists of multiple functions—the public information library and the modern art museum. In 1969, the president Pompidou approved the project of the largest museum- Pompidou center. The design by Italian architect Renzo Piano, Gianfranco Franchini and British architect Richard Rogers stood out among others in the architectural design competition. The New York Times said the Pompidou center was “love at second sight.”

The first time I came to the Pompidou was part of the tour led by our instructors. We got off at the Les Halles metro and came out. The building was attractive because of the color and the structural outlook. Giant elevators, pipelines are in harmony. I did not expect the space in front of the Pompidou center becoming the place for artists, people who want to find a quiet space for reading and gathering.

Entering the Pompidou center, the second floor is where the public library is located; the modern art pieces from the post second world war period is on the fourth and fifth floor. The exhibition had a similar feeling as the Guggenheim Museum. It has masterpieces by Henri Matisse, Pierre Bonnard and etc. Except for the static art, the museum features a lot of moving pictures, experimental films. Even though the art pieces are abstract, the setting and the inner structure of the building is awesome. The street next to the Pompidou center is also full of art activities.

Musée d’Orsay is located on the left bank of the Seine and it was transformed from a railway station Gare d’Orsay. It has largest collections of the Impressionism painting. The station’s platforms were not suitable for the train, so it was used as a train running in the suburban area and later as a film set. Until 1974, the director of the museums of France suggested building a museum out of the station to bridge the gap between the Louvre and the Centre Pompidou. The Orsay has paintings, sculptures, photography from 1848-1914. I really favor the impressionism paintings from Monet and Cézannee, apparently, this is the museum for it.

The museum’s interior design still keeps the look from the railway station. On the first floor, the numeral gates were covered by glazed windows and artwork side by side, with sculptures in the middle. Most of the permanent collections are located at the fifth floor including work from Monet, Miller, Vincent van Gogh, etc. There is a transparent clock shows time from the outside; you could see the overview of the north bank of the Seine river including the Grand Palais, Place de la Concorde and Arc de Triomphe.

Unlike the Louvre or the Versailles, where there will always be people waiting in lines, you can see a capacious museum, coming to the Orsay around noon time. The Orsay shows mainly the French artists’ work and is more concentrated. I like the Orsay since I got to see a lot of impressionist paintings showing different landscapes of France in the early 20’s. The station’s clock and station’s platforms seems to take you travel across the times.

Château de Versailles is the only chateau that gives me a shock of how grandeur and exquisite it is compared to other smaller chateaus. It is the palace built by the Louis 14th as the hunting lodge. The Louis live here until the breaking out of the French revolution. Versailles consists of two part, the castle, and the garden. When you peak the golden palace from far away, you will see the statue of Louis 14, around 100” tall. It was unfortunate we went there on a rainy day; we had to wait in line for over an hour. I was worried if the long wait can’t pay off with the view, but the castle is really way beyond my imagination. Like the other museum, you have the audio guide covering all the different rooms and furnishings.

Crystal lamps, huge portraits and paintings all over the celling—you can imagine how lavish the kings’ life are. There are paintings of the greek stories, to highlight the divine right of kings, and the historical events happened among the Louis.

Before moving on to the garden, we went to the Angelina—famous and exquisite pastry store. I ordered an entrée with Tuna and the Mont-Blanc.

The pastry definitely won my heart with the smooth combination of chestnut and chocolate. The garden of Versailles is the highlight of the chateau.  It is gigantic that I cannot see the whole garden at once.

The back garden contains neat cutting of glass that is in line and embrioder parterre-a formal flower bed garden and a music fountain. I felt I ran into Alice’s wonderland since some trees are taller than me. The water show/music fountain is breathtaking, though some people say it is not like any of the animated fountains in Vegas(I haven’t been there yet). It is amazing because it is on a large scale with water coming on artistic status. The fountains did not run at the same time but come from here and there with the music.

I’ve been to a few other museums in Paris, which I will mention in the Museum Guide II. The overall impression of the museums to me are iconic and specific, compared to museums in the states. Paris has more focused and spread-out collections, and the places themselves have a longer history and artistic value than those in the U.S.