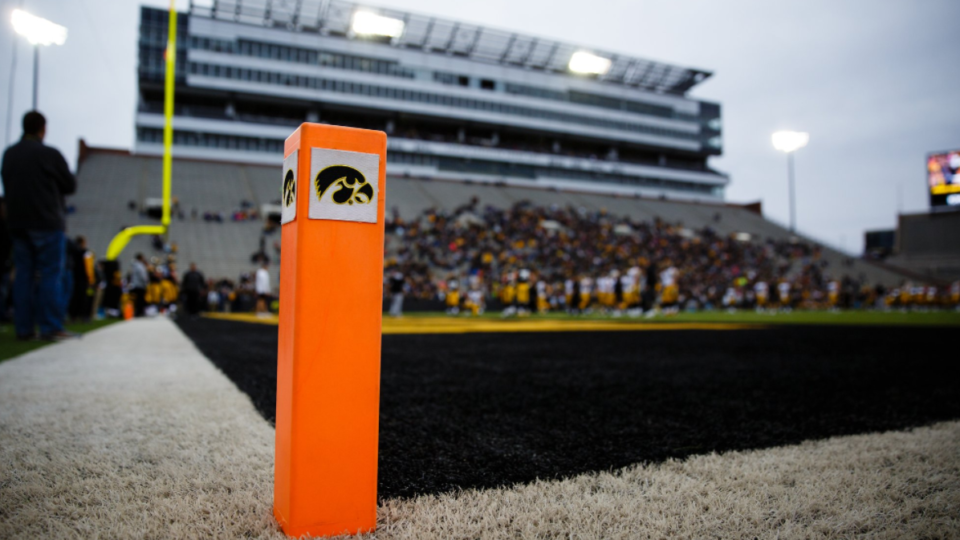 First off, it’s a mild spring evening, not a chilly fall night. Second, this was a Hawkeye football game of 16,500 people instead of a local high school. Third, the final score; Gold (defense) beat Black (offense) 63-47.

The high scoring affair under the lights that combined to a grand total of 110 points. The missing detail, one team scored on nearly every play, in one way or another. The Hawkeyes spring game uses an intricate scoring system to add a level of excitement.

The best way to score points is obviously a touchdown, just like in a normal game. Tonight, sacks and interceptions loaded the scoreboard for the defense. Junior safety Jake Gervase contributed 15 points through interceptions alone.

Gervase had himself a night. Intercepting starting quarterback candidate Tyler Wiegers twice in the first half, one of which resulted in a 59-yard touchdown. He picked off a Nate Stanley pass in the second half as well.

“I was in the right spot at the right time,” Gervase said. “I just try to take advantage of every opportunity. Nothings guaranteed and I really tried to make the most of it.”

Gervase joined the first team defense after starting safety Brandon Snyder went down with a season ending knee injury just over two weeks ago. Iowa has always plugged the next man in even when a crucial starter goes down.

“Jake was practicing well before that, he got off to a good start this spring,” Coach Kirk Ferentz said. “He’s been on a track that way and its paying off for him.”

Young, who rushed for a score, is already reminding people of last season’s other thousand-yard rusher LeShun Daniels. Young, who led all rushers in the spring game, has excited his teammate Akrum Wadley.

“I feel like Toren and Toks coming in are capable of doing anything,” Wadley said. “You’ve seen bursts from Toren and ability from Toks, those guys are hungry. It’s entertaining to watch them play.”

The combination of Wadley, Young, Akinribade, and Joly elicited memories of two years ago but Wadley didn’t want to get too far ahead of himself.

Like most positions, nothing is set in stone and Ferentz wants to keep the door open at running back. Seeing multiple running backs is something he said they count on.

“Those two are different kinds of backs, and that’s fine,” Ferentz said. “Both have a lot of growth to go so not having Akrum play was probably a good thing.”

Wadley’s also still been growing, physically and in his game, over the offseason.

“The biggest thing is his weight and he can be a little flighty at times but he’s focused on the right things,” Ferentz said.

Despite quarterback CJ Beathard walking the sideline last night, he won’t be suiting up for the Hawkeyes any time soon. Since he has wrapped up his career, the quarterback competition has taken off. All throughout spring ball the question of who will start day one against Wyoming has been at the forefront.

Both Nate Stanley and Tyler Wiegers played a substantial amount but the battle didn’t get any closer to a decision. Neither played outstanding nor did they play horribly bad. They combined for three interceptions but showed signs of improvement.

If the game were tomorrow the Hawkeyes would have their work cut out for them.

“We’d probably do a coin flip,” Ferentz said. “Luckily we’ll have 15 to 18 practices before we have to make that decision.”

The decision will come

somewhere in camp. Wiegers and Stanley both agree they still have work to do. Stanley threw the game’s only touchdown to Devonte Young for four yards in the first half.

“We are still working on some chemistry and getting everything in the playbook,” Stanley said. “Coming out here and playing live we did alright but there’s a long way to go.”

“There’s some plays I’d like to have back, obviously there’s good stuff too,” Wiegers said. “Being more consistent going forward is a big thing.”

Every issue wasn’t completely the quarterbacks fault, multiple receivers dropped fairly catchable balls. Similar to last year, the receiving core has the ability to make or break the offense.

Iowa targeted five tight ends during the game. The most notable positive for the future is youth at tight end. Noah Fant, who played at times last year, plus redshirt freshman Shaun Beyer, TJ Hockenson, and Drew Cook all had multiple targets. Senior Jon Wisnieski joined them on the stat line.

Overall the spring game is an opportunity for everyone to check out the team in live action. The talent level on this team is close, and will make for a competitive summer and fall. The first game is Saturday, September 9 at Kinnick.