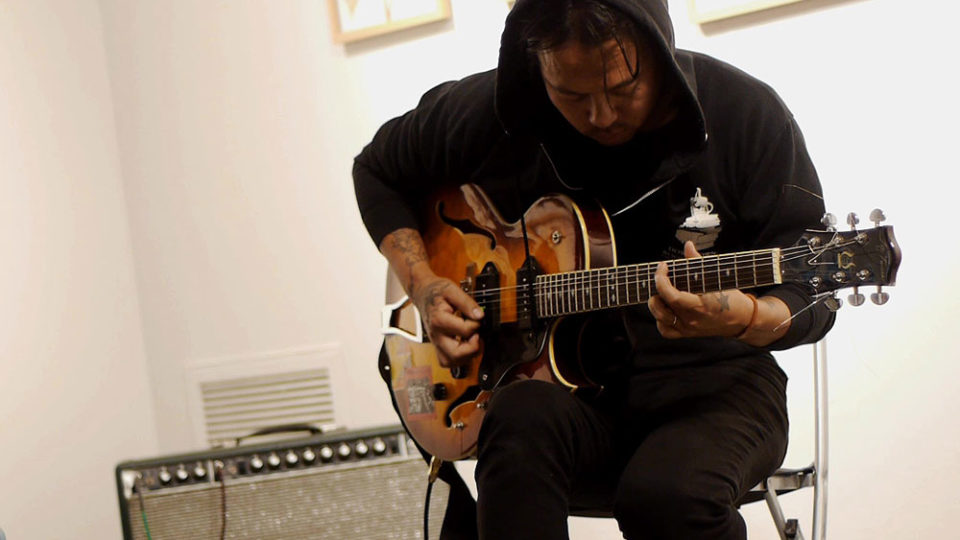 I have a habit of not listening to the performers of Mission Creek before I watch them live in order to not go into event with pre-determined ideas of what the performance is going to encompass. I think I’ll have to re-think that rule I made for myself.

I showed up at the Trumpet Blossom Cafe about 20 minutes before the show was supposed to begin and I was afraid there wouldn’t be any seats. Boy, was I wrong. The place had a few people scattered throughout the venue but I was able to find a table near the front no problem.

The show didn’t begin until about 9:30 and 75 Dollar Bill walked out accompanied by Sue and Alice (who know the members of the band). Daniel Wyche had been expected to perform but had to pull due to a family situation. I thought it was cool of Sue and Alice to take his place due his unfortunate situation. However, after about 10 minutes, I was falling asleep. I should put a disclaimer here and say that I haven’t gotten much sleep this week because you know, college. So maybe it wasn’t just the music that had me wanting to pass out.

Sue, Alice, and 75 Dollar Bill started off with slow and, what I deemed, melo-dramatic music with a whole lot of ah-ing. As the music kept playing at its slow and melodramatic pace, it also got deeper or darker, if you will, and I legit felt like I was at a funeral. The four of them sang about 6 or 7 songs all with similar pacing, rhythm, and style. Which I found boring and tiring. It could have just been me that felt that way because the audience cheered and clapped at the end of every song and were, from what I could tell, having a great time.

75 Dollar Bill, Sue, and Alice played for about 40 minutes. After that, Sue and Alice got off the stage and let 75 Dollar Bill play by themselves. Members of the duo are Che Chen and Rick Brown. Now, I want to preface this by saying that both of these men are really talented and I can definitely tell why they have a fan base but I was not a fan which may be due to not really having any understanding of the genre that was played.

The duo played 3 songs in the span of an hour. Do you ever have those days were 5 minutes seems to last an hour? Yeah. That was me. The songs were slow and instrumental which in a sense were good but due to my lacking of knowledge in that genre I couldn’t really enjoy the music to the capacity that the rest of the audience could.

I should mention however, that in that entire venue the only person who was completely done with life in that moment was me. Everybody else was super excited, clapping, cheering and having a grand time. After what seemed like forever, let’s be real, that entire night felt like forever, Tashi Dorji and Tyler Damon took the stage and played for about an hour. They also played 3 songs in one hour. It also felt like forever. The only difference was that while 75 Dollar Bill played more slow and soft songs, Tashi and Tyler played loud and fast songs.

I don’t know if it was because, at that point, my head felt like it wanted to explode but for reason I couldn’t get invested in Dorji and Damon. It wasn’t for lack of talent on their part but I think that I was just done for the night. They woke me up in the beginning though so props to them. Dorji and Damon’s songs followed the pattern of loud, soft, loud. Which was fine. It was better than listening to only slow music for another hour.

Each song that was sung received cheers and applause from the crowd. When Dorji and Damon ended their set, it was the loudest I had heard the audience cheer that night. Which was great. I’m glad that the audience, 75 Dollar Bill, Tashi Dorji, and Tyler Damon’s fans, were able to appreciate the night and the performances to their full capacity. As for me, we now all know which genre is not for me.

To hear 75 Dollar Bill and Tashi Dorji and Tyler Damon, look below.