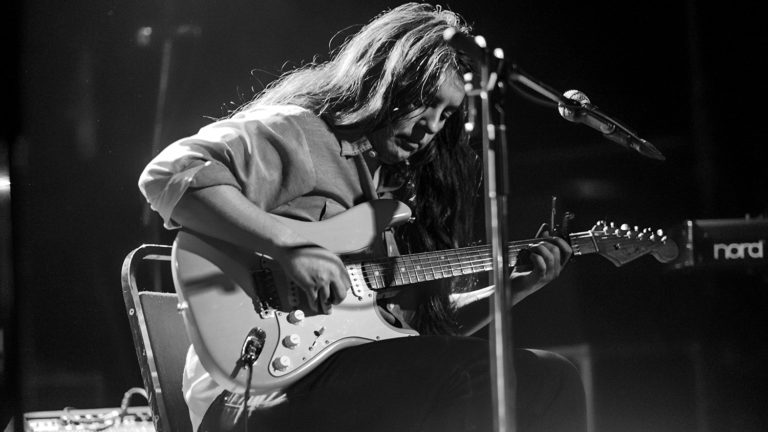 I had only been to Trumpet Blossom one time before the sixth of April to see Marisa Anderson perform and I found the venue charming. I loved the decor around the restaurant and the candle-lit tables added a nice, calming touch to the ambiance. As I looked around, I was the youngest person there, but probably not by too much. I sat down at the table closest to the stage, ordered my usual cup of black coffee, and waited until the show began.

Liv Carrow was the first out of three performers that would be playing that evening. When she sat on stage and started to tune her guitar, I could tell how eager she was to begin her set, and also that she was so calm about it. She strummed to herself for a few moments, as though to get a personal kind of joy out of her music before she shareed it with everybody else.

When she introduced herself and started to play, her voice was a little shaky, like she was nervous to be performing with us, but by the end of the first song it was easy to tell that she was becoming more confident. She has a beautiful singing voice like someone I know but cannot place. The lyrics she crooned to us are impactful. “What a man will do to fill his pocketbook and take a piece of you” is a lyric that stuck out to me more than any other, not necessarily because it was relatable but because of how much soul she gave to her audience as she sang to us.

There was something about a beautiful voice and an acoustic guitar that can be so special when it comes from the right artist and by the end of her set, I know that I would have sat there and listened to her for hours. Her soft, folk music is going to be my next obsession for at least a few months.

The second performer, Sarah Louise, takes the stage after a very short intermission. She starts with barely any words, just a simple introduction and telling us her name. She then starts in with her guitar and performs a long, instrumental song. It makes me wonder if her entire set will be instrumental, since I didn’t look her music up before going to see her in concert. She does eventually sing, and her lilting voice is something like I haven’t heard before.

As she talks to us between her songs, she seems much timider than her music would ever have me believe. She kindly shouts out Liv by saying, in the sweetest voice, “it was a very beautiful set.”

Her music sounds very based in nature; I remember feeling like I was flying or a part of the sky in one of her last songs. I can’t always tell if she sticks to her songs as they’ve always been played. She put so much of herself into her performance and at times it felt as though she was improvising. The music is almost meditative, but I can definitely sense some harder, rockish influence in her sound.

Finally, it’s time for headliner Marisa Anderson. I’ve listened to a few of her songs before, but only after I saw her on the Mission Creek lineup. Her work is purely her guitar; her voice isn’t a part of the act.

As she starts playing, I realize that her sound and style as she plays live is completely different from the sound and style that I heard when I looked her up on Spotify. In her recordings, the guitar seems more muted which I admired because it had a smooth and flowing feel to it. In concert, her guitar is grittier and makes her sound much more rock influenced than I initially would have thought. She moves to her music and every movement seems new, like each and every note has a meaning that is completely unique.

Something I loved most about her set was her explanations of what her music was all about. She describes her inspiration for her last album: she was thinking about how the word “alien” could mean either a being from outer space or a human that isn’t from the United States. She commented that this was such a flaw in our society’s language, and she kept thinking about it. Eventually it inspired a kind of Western movie in her mind, and her latest album was the soundtrack to her imaginary movie.

She also tell us the meanings to her individual songs from earlier albums. “This song is about taking too many drugs at a bluegrass festival in the parking lot for two hours. I didn’t even make it into the festival. I was having the best f*cking time of my life.”

Another song was inspired by the tale of a woman who accidentally fell in love with the devil, who drowned her as he revealed himself. “I don’t blame her for falling in love with the devil. We all do. If you haven’t yet, you will. It’s just human nature” She continuously struck me, and I left the venue wanting to know more about her mind.

There was something about this concert last night that changed the way I’m now looking at music. I haven’t stopped listening to folk music since I left the venue, and I don’t think I will for at least a few weeks. There’s something there that I didn’t see before. There’s also a huge empowerment in seeing three different women rock a stage with nothing but their voices, their guitars, and their minds. They’ve inspired me.

Listen to Liv Carrow’s music here, and both Sarah Louise and Marisa Anderson’s most recent albums below!