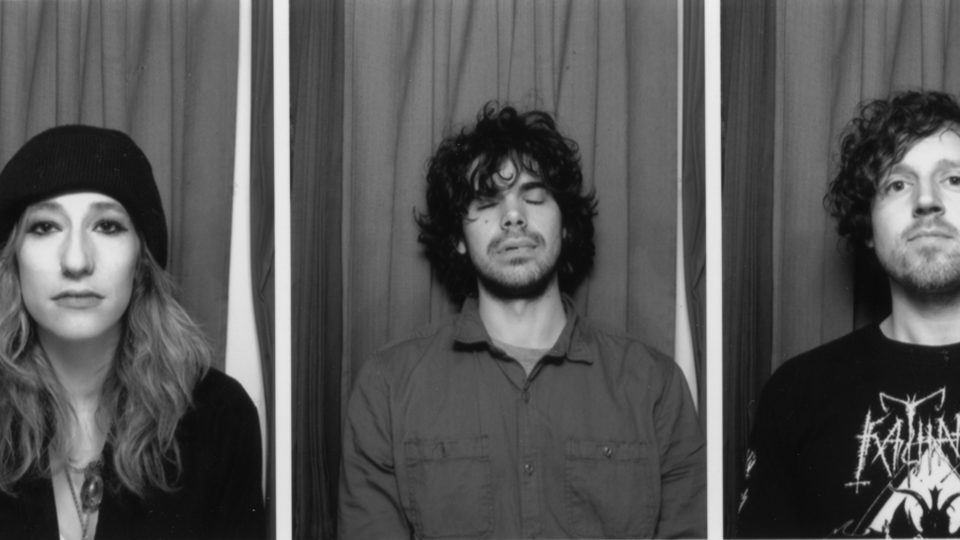 Tucked deep in the basement of Iowa City Yacht Club is a small stage lined with colorful holiday lights and lit up by a single red spotlight, illuminating the brick walls of the intimate space. This was the setting for the performances of the night: 90s grunge band, Lifestyles, plus openers Gosh! and Greg Wheeler & The Polygamist Mall Cops.

First on stage was the eclectic group, Greg Wheeler & The Polygamist Mall Cops. Self identified as “manic garage punk slime”, this band lived up to the impression of their name: strange and incomprehensible. From the first glance, I knew this would be a unique performance. The guitarist sported an oversized Milwaukee Bucks jersey while the drummer wore a traditional mall cop uniform, complete with badge, and finally, the bassist and only female in the group danced around in a sexier version of a cop uniform. It was perplexing but not particularly fascinating. Instead, it created a sense of confusion and ultimately, annoyance at whether or not they truly had a method to their madness. They began songs with the cliche “1, 2, 3, 4!”, making them sound even more like an angsty group of teenagers in a garage. Despite their shortcomings, I’ve gotta give it up to them for their originality, even though I still don’t quite understand the meaning behind their name, Greg Wheeler & The Polygamist Mall Cops.

Next onstage was Chicago-based trio, Gosh!. This intriguing band plays minimalistic psychedelic dream pop, gracing the stage with an eerie sound. With matching curly locks down to their shoulders, the two men and one woman were in cohesion with each other throughout the entire performance, creating a vibe that was easy to get on board with. Their vocals were in sync, floating together with “ooo”s that transported the audience into a dreamlike state, holding true to their title. They stuck to their minimalist roots, their whispering voices crooning above a stripped down guitar. As their set went on, the music became more complicated, subtle songs growing into a fast-paced scream of instruments that lifted the audience off of the ground and sent vibrations into each chest.
Gosh! finished their set with my favorite song of the night: “Not That I’d Care” from their album Cities of the Plain. This track had a more carefree vibe than their other songs, making me feel as if I were prancing along a colorful brick street in the whimsical world of a Wes Andersen film. Gosh! has a distinct style that I was pleasantly surprised by, stealing the show.

Finally, the headliner of the night was punk rock band, Lifestyles. The three-person band took the stage nonchalantly, the male drummer wearing a Metallica t-shirt with the sleeves cut off, male bassist dressed in a plain white t-shirt and leather jacket, and the female lead singer and guitarist sporting knee-high leather lace-up boots, tattooed arms exposed through her ripped grey t-shirt. They all looked badass and ready to put on a show. The lead singer gave a smile to the crowd just before beginning to play, and this was the last glimpse of any joy we caught for the rest of the night.

From the moment they began playing, the room was filled with brutally rough, loud and angry music. The band members are definitely talented instrumentalists, their fingers moving rapidly over the strings of the guitar and the drummer’s sticks never ceasing from moving, but their music itself was extremely unpolished. The lead singer’s voice was scarily screechy, incomprehensible and just plain unpleasant to listen to. Her screams were so sporadic that it made me wonder if she was even singing a song or simply making up everything as she went. The bassist’s voice was a bit more appealing, bringing some levelheadedness to her chaos through his background vocals. There were several instrumental breaks that were interesting and enjoyable, but would always be interrupted too soon by the lead singer’s harsh voice, jolting me back into discomfort.

It was difficult to distinguish one song from another, because all included the same aspects: grating instrumentals, screaming vocals and lots of anger. Anger is an immensely interesting emotion and music involving anger can be powerful. However, there is no way for the audience to connect with angry music if they have no idea what the musicians are angry about. I could not understand the meaning behind any song that Lifestyles performed, so I had nothing to grab onto emotionally – all I heard was noise. Maybe this is the purpose of Lifestyles’ music – to be noise. If they simply want to create a specific sound, not audible words or stories, then they accomplished their goal. If they want to entertain, then they have not achieved their goal.

Lifestyles’ performance was full of energy, with each band member visibly giving it their all. The bassist eventually ripped off his jacket, white t-shirt underneath soaked against his skin, throwing his head back and screaming the lyrics with his eyes closed, mouth wide open, teeth exposed. The drummer shook his head spastically, eyes wide and intense like a maniac. The lead singer had a constant dangerous look in her eye, just visible through the strawberry blonde hair that she let fall over her face. She was clearly in her own world for the entirety of the performance. I cannot say that Lifestyles did not have a purpose with their performance, because they are clearly performers. But what I can say is that I haven’t the slightest clue what that purpose was.