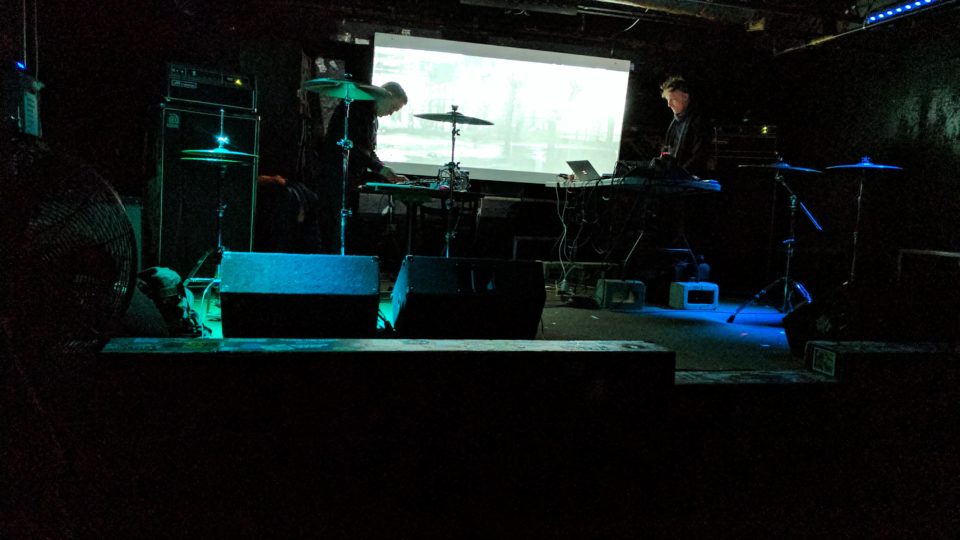 One of the annual Mission Creek Festival‘s kickoff events was HEXA, a duo consisting of Xiu Xiu’s Jamie Stewart and Lawrence English. After releasing a soundtrack, Factory Photographs, they’ve brought their project to Iowa City – a combination of industrial photographs by David Lynch and an aural experience. (The name Lynch sound familiar? He’s largely known for creating the show Twin Peaks.)

The evenings mood was set by haunting performances from Brad Highnam and TALsounds. Highnam, who is from Iowa City, conjured mystical images of expansive places by layering his wailing harmonica and recorder over deep, muttering bass pulses. He was the lone star of the space he created. Then TALsounds took stage right, swiveling around her retinue of instruments, and weaving to her beats while freely singing. Between the droning and distorted dial-up tones, her ultra-pretty voice slithered over the heavy noise, creating the effect of a distorted, electric angelic choir.

Meanwhile, the audience had slowly been multiplying. People noiselessly made their way in, unnoticed until realizing the room has filled out. Everyone stood at appropriate, respectful distances, turning their full attentions to the stage. The venue was filled with an acute intensity that could not be ignored, especially for a crowd so quiet. There was no dancing, singing along, or even much chatter at Gabe’s that night – mostly concentrated faces, crossed arms, and hungry eyes.

And though there was singing and distorted vocals, none of the performers so far had really said a word, introduced themselves, preface their music – really, any direct communication at all. But the sounds being made were not about lyricism and form – rather, the improvised, creation, and atmosphere. The sets unfolded quite organically for electronic noise; not at all like the bop of EDM, but still more alien than traditional instruments. The performance aspects of this show were just as crucial as any other, but these were comprised of one or two people instead of an entire band. What limits a five-piece group, or even just the acoustic, can liberate a hand or two at a soundboard.

Finally, HEXA took the stage. Facing each other, right and left, Lawrence English and Jamie Stewart didn’t appear to be dueling, or even looking for visual cues in each other. With clean, contorted trances, the duo cranked out heavy bass, and began to layer a display that flexed and remolded my imagination.

In the background cycled a series of David Lynch’s industrial photos that inspired HEXA in its origins. Something that looked like a microphone with a custom mouthpiece was blown, creating a grating buzzing. Abrasive sounds fazed in and out – what sounded like metal crashing and scraping together, like stone and concrete – and eventually, English moved to the three cymbals on his side of the front stage. He viciously rolled the cymbals with fuzzy mallets. And then Jamie Stewart laid his beat and moved to his own ho-hat and stacked cymbals. These he utilized with drumsticks, with a similar ferocity to match his partner, until the instruments could sing for them no louder.

Thus, amidst their technological creation, they also managed to demonstrate a basic principle of acoustics: I hit things, and they make noise. The duo returned to their respective stations. The sound kept grinding, but mellowed out. Bizzare drones and reverbrations came from what I can only describe as a vibrating contraption in a cup. Everything faded into that deep, pervasive bass at the foundation of the sound. And then Lawrence English made a grateful gesture towards the crowd with his wide-brimmed hat. The noise sputtered, then was at rest.

This was not the easiest performance to listen to. Just as reading poetry isn’t as straightforward and sensible as prose, HEXA’s industrial concept isn’t just about auditory pleasure. But their audio-visual experience created just that – an experience – that pushes how we can perceive and create an environment with sound.

English will also be return to the stage at Gabe’s tonight with Elysia Crampton, MacMillan and Spengler