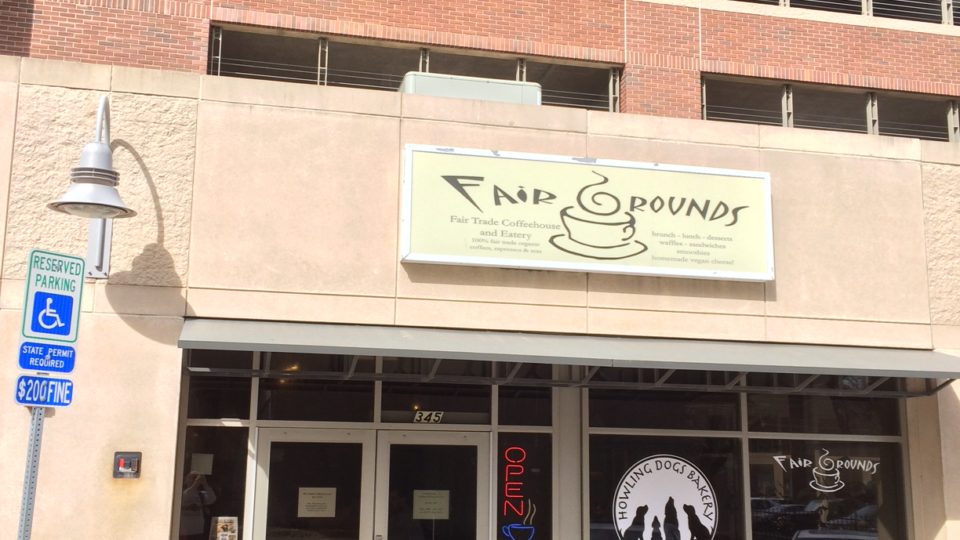 Carrying on my exploration of local caffeine hubs, I decided to take a trip over to 345 S. Dubuque and visit Fair Grounds Coffeehouse.  What struck me most about the establishment upon entering was how much it had going on simultaneously. After making just a cursory glance, I was swimming in sensory overload. Two televisions were streaming classic films above the main seating area. Blues guitar beat out from speakers that I couldn’t quite locate. An array of potted plants in various stages of disrepair lined the bank of windows behind tables to my right. Two separate ventilation systems bulged and buzzed from the ceiling. Food is cooked in front of customers, so a constant sizzle and smokey fragrance suffused the air. Conversation among patrons rang out alongside the standard dining room clank of cups and clink of silverware. Behind the line for customers sat a vacant rocking chair.  By the time it was my turn to order, I needed a minute to sit down at the bar and regain my bearings.

Beyond what is immediately depicted on a chalkboard above the counter, Fair Grounds also offers breakfast burritos, omelettes and several styles of french toast. After thinking it over, I opted to go with the breakfast burrito and a cup of Honduras dark roast coffee. The total ended up ringing in at $13.50, which I thought was reasonable considering that there is an active wait staff who prepare meals fresh and then deliver them to customers. It could have been cheaper if I decided to keep my dish meatless, but I opted to add chorizo for $2.50.

While waiting for those items,  I took a stroll into the second seating section at the back of the restaurant. It was much less cluttered. A lounge spot featuring an L-shaped sectional sofa sat immediately to my left, and the rest of the space was comprised of the same wooden four top tables found throughout the establishment.  Pieces of surreal art hung on each of the walls for decoration. There was an especially strange portrait of an alien woman spitting out a millipede above an Illuminati bong.  But, if you can handle the art, I think this area would be an ideal place for studying. Its tables are away from the main door, two unisex bathrooms are nearby, and the surroundings offer little in terms of distraction.  When I finally got around to checking it out, most of the tables had already filled up. I visited on a Saturday around 10AM, but I feel like it would be less crowded during the week. It was great to finally be in a good seat at a good restaurant, lately, I’ve been leaning on Foodora for my meals quite a bit, so this was a nice change.

The food and coffee was brought out a few minutes after I returned to my original seat. The burrito was honestly amazing and a really good size. It came loaded with potatoes, cheese, mushrooms, and lots of chorizo. I was also happy that they gave a little side cup of salsa as well. For people trying to max out at breakfast, their specials come with toast. I had been here before and gone down that road (with their Italian sausage omelette), but it was always a struggle to finish everything. I ended up using some of the room that I had left over to get a coconut muffin from their Howling Dogs Bakery kitchen. That was really good too, and their scones have blown me away in the past. I think the only competition around Iowa City as far as baked goods go would be Nodo.

Fair Grounds is an awesome spot overall. It’s only a couple blocks from my apartment, so I definitely come through pretty often. My favorite time to visit is during the summer because there aren’t many other customers and I can read for hours in that back seating area. Howling Dogs might be the best bakery around town, so–if you go somewhere like Bluebird on East Market for breakfast–you should definitely hike over to South Dubuque and get some dessert at this location. They also serve alcohol here, so there are some adult beverages that can be the hair of the dog if you’re trying to lessen a hangover or act as a reward for sustained studying. Definitely make a visit, get a scone, and maybe sip a little bit (if you’re 21+, obviously).

Have somewhere cool around Iowa City for me to checkout? Send an email to 522xxtourguide@gmail.com!