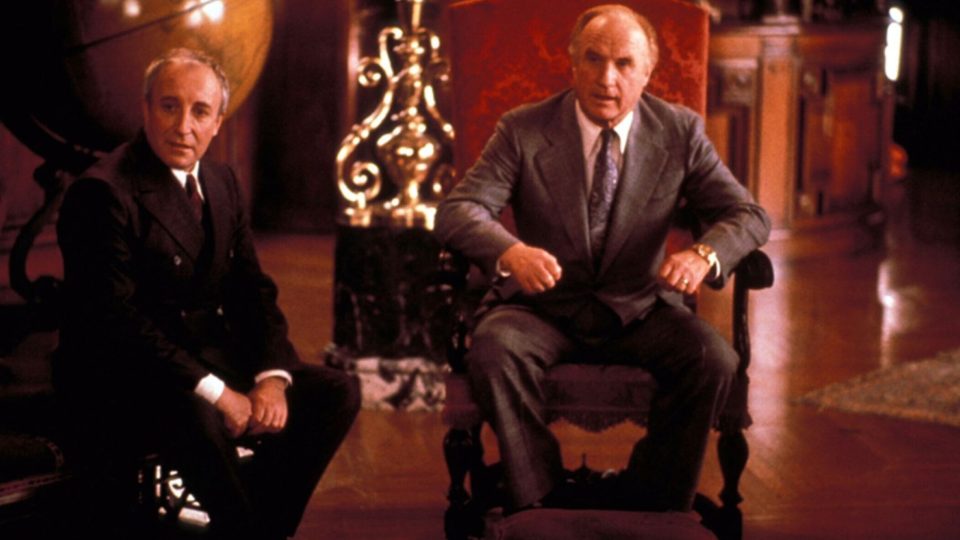 Being There is a 1979 movie based on the 1970 book of the same name by Jerzy Kosinski. The film is a great mixture of awkward, quaint comedy and quiet drama. It also features a stunning and unique performance from Peter Sellers in the leading role.

The film follows Peter Sellers as Chance, an older man with a childlike mind and affinity for gardening and watching television on an wholly bizarre journey. Chance worked most of his life as a gardener and tenant in a rich man’s manor, and is put out on the street when the rich man dies and lawyers close down the house, leaving him to wander around Washington D.C. aimlessly. Chance is given purpose once more when he’s taken in by another dying, wealthy and powerful man named Ben Rand after Chance is struck by one of Rand’s cars.

Rand and his wife Eve take a liking to Chance and his simplicity, mistaking it for some deeper level of thought, even to the point of Rand taking Chance to meet the President of the United States, who is also taken in by his simple words of gardening and gives them deeper political meaning. As a result, the political class in Washington starts tripping over themselves trying to figure out what kind of motives Chance has and who he really is. And they all fail to understand that Chance is as simple as his words.

Being There is an incredibly tight satire, clearly mocking the Washington environment of intrigue from the politicians to the press. Everything and everyone in politics have some kind of motive to the point where no one understands it when the come across a man with no real motive at all. Another impressive facet of the movie is how Chance’s mentally handicapped mind is not the punchline of every joke, as the punchline is instead every other person’s reaction to him.

But overall, Being There is a movie about listening and dissonance. No one seems to listen to Chance in the film, save for a couple of characters at the beginning and end, and that is the core of each of their interactions with him. The other characters seem to only listen for what they want out of Chance, and so they miss what he’s really about. For example, Rand wants an intellectual confidant to ease his nerves as he comes closer to his deathbed, and so he places his own meanings in the interactions between him and Chance to get what he wants.

The writing of Being There is so fascinating with so much to unpack, but it’s time to look at the biggest marvel of the film: Peter Sellers as Chance. The supporting cast turn in good performances as well, like Shirley MacLaine as the fragile bourgeois socialite Eve and Melvyn Douglas as the brash Ben Rand, but Sellers’ performance is truly something special.

Sellers has a remarkable talent of becoming the characters he portrays, each one so different from the others. His performance as Chance is no exception, a far cry from his characters in The Pink Panther and Dr. Strangelove, his two other most popular roles. Every expression, mannerism and simple sentence strung together feel so believable. His attention to detail is incredible as the audience can see him struggle to put his thoughts into words and how he curiously looks at his surroundings without stealing the attention from the other actors in a scene.

While not entirely accessible due to its quiet nature and slow pace, Being There rewards the patient viewer with excellent writing and one of the best performances by a comedic actor they’ll ever see.

For more Peter Sellers, check out The Pink Panther and Dr. Strangelove Or: How I Learned to Stop Worrying and Love the Bomb

For more Shirley MacLaine, watch The Apartment and Terms of Endearment.