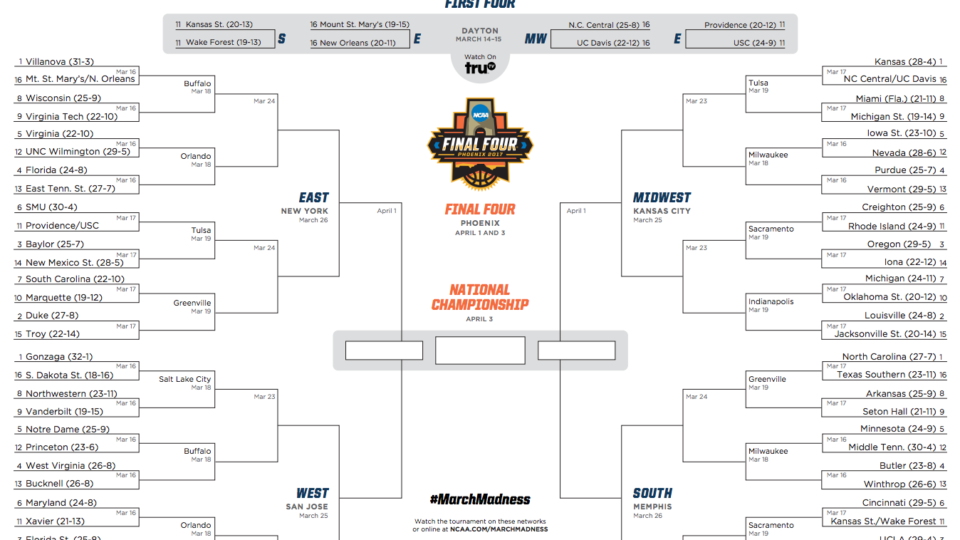 IOWA CITY, Iowa – The Hawkeyes’ NCAA tournament push fell short in Washington D.C. with a 95-73 loss to Indiana. Despite Iowa not making the cut to get into March Madness, fans are still going to be locked to their TV’s for the next three weekends.

CBS reviled the field of 68 Sunday afternoon, leading most college basketball fans around the country to fill out their brackets. Each fan hoping to win their work pool, or the much more unlikely option, having a perfect bracket.

The name of the tournament speaks for itself, the tournament is unpredictable. The odds to accurately predicting a flawless bracket are about 1 in 9.2 quintillion.

Even with such unpredictability, there are a couple themes stand true about who is likely to be making the trip to Glendale for the Final Four. Year after year, the tournament is complete madness but the road to the Final Four is more simple than it would seem.

Over the last ten years the team that cuts down the nets features a star, usually veteran, guard. Half of the last ten years Final Four Most Outstanding Players were upperclassmen. Add the Russ Smith and Payton Siva from Louisville’s win in 2013 to the mix as well.

Last year, Villanova’s Ryan Arcidiacono led his team through the gantlet NCAA tournament to their first National Championships since 1985. Coach Jay Wright touted Arcidiacono’s leadership skills, even saying he was a mini version of himself.

Arcidiacono scored 16 points in the championship game but was highlighted by the assist to Kris Jenkins that led to the buzzer-beating shot. Graduating a year ago, Villanova will be without Arcidiacono.

Villanova, among others, features a veteran guard. One that can assist is leading their team through the NCAA tournament.

Josh Hart, a senior for Villanova, is averaging just over 18 points-per-game, leading the team to their number-one seed in East Regional. Not only will his experience in college help but playing on the biggest stage last year won’t hurt.

Hart, a shooting guard, is at the mercy of sophomore Jalen Brunson leading the offense. Brunson and others still are able to find their leader to put on the points for the Wildcats.

Two other veteran shooting guards on power-conference teams have the ability to lead their squad deep into the tournament. UCLA’s Bryce Alford and Duke’s Grayson Allen both have experience on the big stage, Allen won the national championship in 2015.

Alford is playing for his father, Steve, who won the national championship in 1987. Now head UCLA coach, Steve played guard in college as well.

UCLA’s guard play is among the best in the country, featuring Alford and super-star freshman Lonzo Ball. Between the two, UCLA leads all teams averaging over 90 points-per-game.

Midwest Region number-one Kansas also has a two headed monster. Senior Frank Mason III and junior Devonte’ Graham, who alternate at point-guard. As a result, Mason and Graham account for around a fourth of the team’s points.

Mason is among the nation’s top scorers and that is something that is unlikely to change once tournament play begins. He is averaging 20 points-per-game this season.

Conference rival and Big 12 champion Iowa State is a slightly less likely championship contender. Despite being a five-seed, the Cyclones senior Monte Morris holds similar qualities to the above named guards.

Morris leads Iowa State is scoring and has played a key role in the Cyclones peaking at the right time. Morris isn’t the only veteran guard, three of his teammates that rank second, third, and fourth in scoring are also senior guards.

While Iowa State might not be Villanova or Kansas, they could be a team to watch.

Some lower seeded teams aren’t necessarily looking to raise the trophy in Glendale. Their hopes are to win just a game. Having a guard with a hot hand makes that all the more possible.

Winthrop senior Keon Johnson is top-ten in Division I with over 22 point-per-game. His Winthrop Eagles are a 13-seed and will play Butler but that isn’t anything to stop a player shooting 40-percent from behind the arch.

Making over a fourth of Winthrop’s points, Johnson will be an under the radar senior guard to watch on the first weekend.

It’s easy to pick by the seeds, and chances are that will result in a solid bracket. Since 2010, 62-percent of top-four seeds have advanced on to the sweet-sixteen. Fairly good odds with as many upsets that due happen.

Each year there are a group of teams that shake up the field and make it further than anyone expected. Whether 15-seed Florida Gulf Coast advancing to the regionals or George Mason making the Final Four, crazy things happen.

Last year was Syracuse, and it very well could be again, that made the Final Four as a double-digit seed. Teams like Wichita State, Butler, and VCU have recently advanced to the final weekend.

Other times it’s an early round upset that busts a bracket. Most times those are harder to predict. Trying to selected a low-seed that will take down a perennial power, it isn’t easy.

Year after year it seems that a 12-seed will knock-off a 5-seed. In the last five years, multiple 5-seeds have fallen each year except 2015.

Often the 12-line corresponds with the bubble. The teams assigned a 12-seed are either the last of the at-large or the best of the small automatic bids. This year that line includes UNC-Wilmington, Nevada, Princeton, and Middle Tennessee.

All four of the 12-seeds will be dangerous in the second round. Each squad boasts a factor that cannot be ignored.

Even though the seeds are high, the Big Ten schools tend to show up when it matters. Michigan sits on the seven-line and Wisconsin an eight-seed.

Major conference schools that feel they are seeded low will show two different outcomes. Some will roll over and others will go out with something to prove.

The Big Ten, as a conference, is seeded lower than in the past. In addition, the committee also left out three teams form the big dance: Illinois, Iowa, and Indiana. Watching how the Big Ten will respond could present an entertaining tournament.

When All Else Fails, Pick a One-Seed

A one-seed has never lost in the first round of the NCAA tournament. It’s been close recently, Arizona and Gonzaga both narrowly escaping with single digit wins. The closest a 16 has ever come is one point.

The field features three number-one-seed teams from major conferences and one from a small mid-major. Villanova, Kansas, and North Carolina out of power basketball conferences are the odds on favorites to head to Glendale. Gonzaga, the West Coast Conference champions, have the best record of any team in the tournament.

Villanova and Kansas could face intriguing matchups in the third round. 8-seed Wisconsin is one win from Villanova and 9-seed Michigan State the same distance from Kansas. Both teams played in the Final Four two years ago.

North Carolina, the one-seed in the South Regional, has been the third most talked about school of the region. Both ESPN and CBS thought higher of Kentucky and UCLA out of that bracket than the Tar Heels, despite their regular season ACC title.

Multiple teams, all seeded anywhere from one to three, could have been on the one-line. UCLA, Duke, Kentucky, and Oregon could all make a run at the Final Four.

Look for the high seeds to be strong, even with as crazy as the year has been. The one-seeds have history on their side.