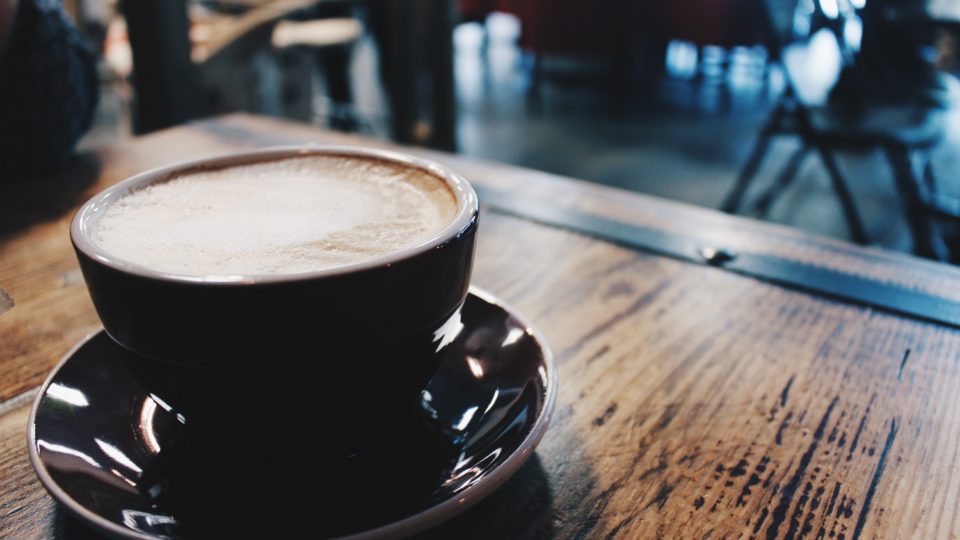 This month I traveled into the belly of our town’s burgeoning coffeehouse scene by way of Cortado—a newcomer to the 52240 zip code located on 26 South Clinton Street between late-night Iowa City staples The Airliner and Pancheros.

After its grand opening on January 23rd of this year, the café has quickly developed a reputation for hot drinks and quality baked goods. Looking at the menu posted outside the establishment, potential customers can find almost any type of caffeinated beverage imaginable. Edible offerings appear subject to change; however, an abundance of variety is consistent across these listings as well.

Upon passing through the doors, I was greeted by two friendly baristas and a display case that featured several types of pastry along with twelve different flavors. I couldn’t remember the last time an apple Danish had entered my life, so ordering that was a no-brainer. I decided to pair it with a sixteen-ounce medium roast coffee (https://crema.co/coffees) and one of their namesake beverages—a cortado.

The total clocked in at $8.75, which struck me as kind of high, but three items from nearby Starbucks or Java House would probably ring in around the same price. Three has been called a magical number; nevertheless, this consumer experience revealed that its power is severely limited when one buys things at a coffee shop. It was all delicious, but I’m still skeptical about whether an equitable relationship exists between the cost of these items and that of a similarly priced burrito or burger available elsewhere. Some things may be beyond comprehension in our world; however, I think it’s safe to say that smart money would typically gravitate toward the heartier fare.

Anyways, I swiped my debit card, gritted my teeth, and hoped for the best. A receipt rolled out of the register. I signed on the dotted line. This virtual tour guide might have ended up late on March rent, but he would at least get to gorge for another day. Well, all things considered, maybe gorge is an overstatement. I ate the Danish while my caffeine brewed.  To be fair, service moves quickly here. It wasn’t long before I plopped down into a booth across from the counter with my loot, notebook, and a copy of Ben Marcus’s The Flame Alphabet.

Now was my time to take in the surrounding atmosphere. Cortado is a self-described “metropolitan-inspired, fast-paced, European style espresso bar,” yet I was picking up on vibes of embargo-era Cuba. The layout doesn’t evoke a sense of authoritarianism—I can’t imagine how Fidel Castro might have decorated a café—but its essential lack of frippery is underlined by subtle ornamental allusions to the Mediterranean as well as classic American diners. If what one drinks here will often have its roots in Italy, what one sees appears to stem from more diverse influences.

For instance, the simplistic wood finishes found around the room appear to be drawn from bistros across Cyprus, and Cortado’s ambient music consists primarily of the acoustic Spanish fusion that might be heard throughout tearooms in modern Madrid. What ended up invoking an aesthetic of post-WWII Americana for me was the classic seating (repurposed school chairs and painted stools) coupled with an unpatterned porcelain countertop set beneath a cluster of lustrous metal.

In addition, the black honeycomb tile at the base of the wall beyond the counter seemed to be a twist on the tacky checkered inlays characteristic of retro-American greasy spoons. These details coalesce into a sparse, minimalist style that pervades the larger environment.

This scantiness is typified by the primacy of a vast brick wall located behind customers in the main seating area. It bears nothing besides a coat of white paint. When one casts a cursory glance around the venue to discern sources of adornment, all that immediately stands out are a couple of large wooden panels placed at opposite ends of the café.

A keen eye will eventually notice the tripartite nature of ornamentation surrounding Cortado’s light fixtures. Above the counter, bulbs are encapsulated within lanterns. Over the central dining area, they hang in black wire globes. Finally, attached to the ceiling of the space, one can spot white track lights. These choices in lighting carry on the allusions to domestic, international, and minimalist influences that inform the overall interior design of the store.

If my first impression of the space was vaguely Cuban, my final one conjured a clear image of renovated Havana. Pictures of cherry wood benches, titanium rafters, and vintage Chevys in overgrown parking lots ran through my mind. The layout of Cortado is interesting, but I think its bare walls could use some paintings or framed photography.When all is said and done, Cortado is ultimately a coffee shop. Customers arrive in pursuit of premium goods and services rather than a museum.

Toward fulfilling those needs, the café delivers in spectacular fashion.There is an excellent espresso maker with high-end coffee plus a fine selection of homemade pastries. You don’t need to order one of each, but splurging is definitely a possibility. I visited over the weekend at around 9:45 in the morning and it wasn’t too crowded. A lot of families arrived as time wore on, but that’s common across establishments after the workweek is over. The room can definitely get loud, so reading isn’t always easy. Regardless, Cortado is definitely worth a visit. If there happens to be a crowd, one can always order their items to go.