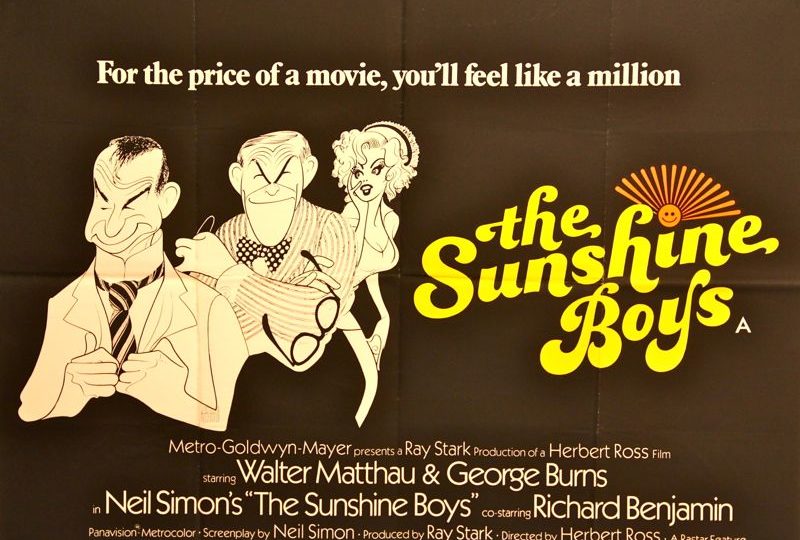 The Sunshine Boys is a delightful comedy from 1975 with Walter Matthau and George Burns. The film follows two Vaudeville comedians in their twilight years as they are called upon to be part of a television showcase of the history of comedy. However, tensions arise from the start as the two actors haven not been able to stand each other for years. The result is two very strong performances from Matthau and Burns supported by a very well written script.

Walter Matthau plays Willy Clark, a brash, disagreeable, loud, and scatterbrained old man struggling to keep his acting career going with the help of his put-upon agent and nephew Ben (played by Richard Benjamin). The stubborn Willy refuses to believe it’s time to retire, and when his old partner comes back into his life, he insists above any and all rational reason to be hostile towards him over bad blood.

Matthau delivers a remarkably entertaining and surprisingly nuanced performance as the misanthropic Willy. He puts his whole voice and body into his character’s screaming rants, and he reserves himself in his more quiet, nostalgic moments to where it’s like he’s playing two different characters. He is the embodiment of the rambunctious grandfather that wears you out but still stays endearing at the end of the day when everyone is cooled off.

Alongside Matthau is George Burns as Al Lewis, the almost polar opposite of Willy Clark. Al is slow, quiet, and soft spoken with his gravelly voice. Instead of fighting for his acting career, he enjoys his retirement with his daughter’s family in a New Jersey suburb while his partner still resides in the hustle and bustle of New York City. While he wants peace with his old partner, his patience for Willy’s irrational behavior only goes so far. And his impatience is potent, especially when Willy keeps pushing him.

The interactions between Burns and Matthau are the lifeblood of the film. They have such excellent chemistry from their yelling spats to their calm, civil moments of catching up after so much lost time. Underneath Willy’s righteous indignant anger and underneath Al’s annoyance and frustration is a deep respect for one another. They show the multiple dimensions of their relationship very well, a credit to both their acting and the screenplay they’re given.

The screenplay was written by writer Neil Simon, who wrote The Odd Couple, both the movie and television show in the late sixties and early seventies. Simon just gets the interactions and nature of the relationships between grumpy old men with heavily conflicting personalities and just dealing with each other.

And that’s really the heart and soul of this screenplay, the importance of working together in the absence of pride and how a friendship or partnership can exist between two people in spite of their flaws. It’s an age old lesson presented in a rather unique and simple way.

Speaking of simple, this movie is unlike the other movies I’ve reviewed for this column. Neil Simon also wrote The Sunshine Boys as a stage play, and that fact is evident in the film. The way the film is blocked and the way the sets are presented gives the film the simple intimacy of a stage play put to film. There is no real spectacle in this film, and it doesn’t really need it either. The performances of Matthau and Burns are certainly worth the price of admission.

For more Walter Matthau, check out Grumpy Old Men and The Odd Couple.