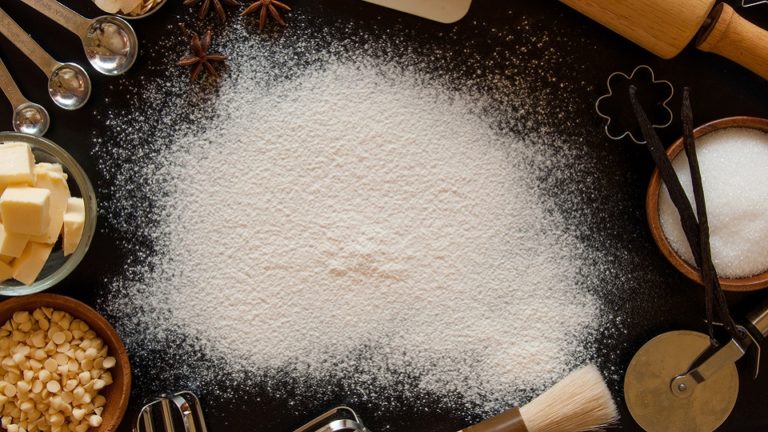 Since the holidays are officially over I can finally stop pretending to like winter and continue to desperately hope spring comes in February this year. (Even though that would definitely mean climate change is accelerating much faster than originally thought and we’re definitely doomed.)

I’ve lived in Iowa my entire life and yet I still don’t know how we as a human species endure winter year after year. You’d think having some Swedish ancestry would help me cope considering they hail from the literal arctic, but I still despise winter with every fiber of my being.

To help break up the dreariness of winter I decided to make what I hoped would be a refreshing spirit-lifting recipe reminiscent of spring. I found a coconut lime cake recipe from Cotter Crunch that sounded very tropical and spring-like and also happened to be vegan, but I didn’t really want to go through the effort of making the coconut cream frosting even though it sounded delicious. Since I wanted the cake to stand out a little more instead, I used a glaze recipe from Daisy and the Fox and also made the candied limes from their recipe for decoration. I know, THREE whole parts?? I am so brave. 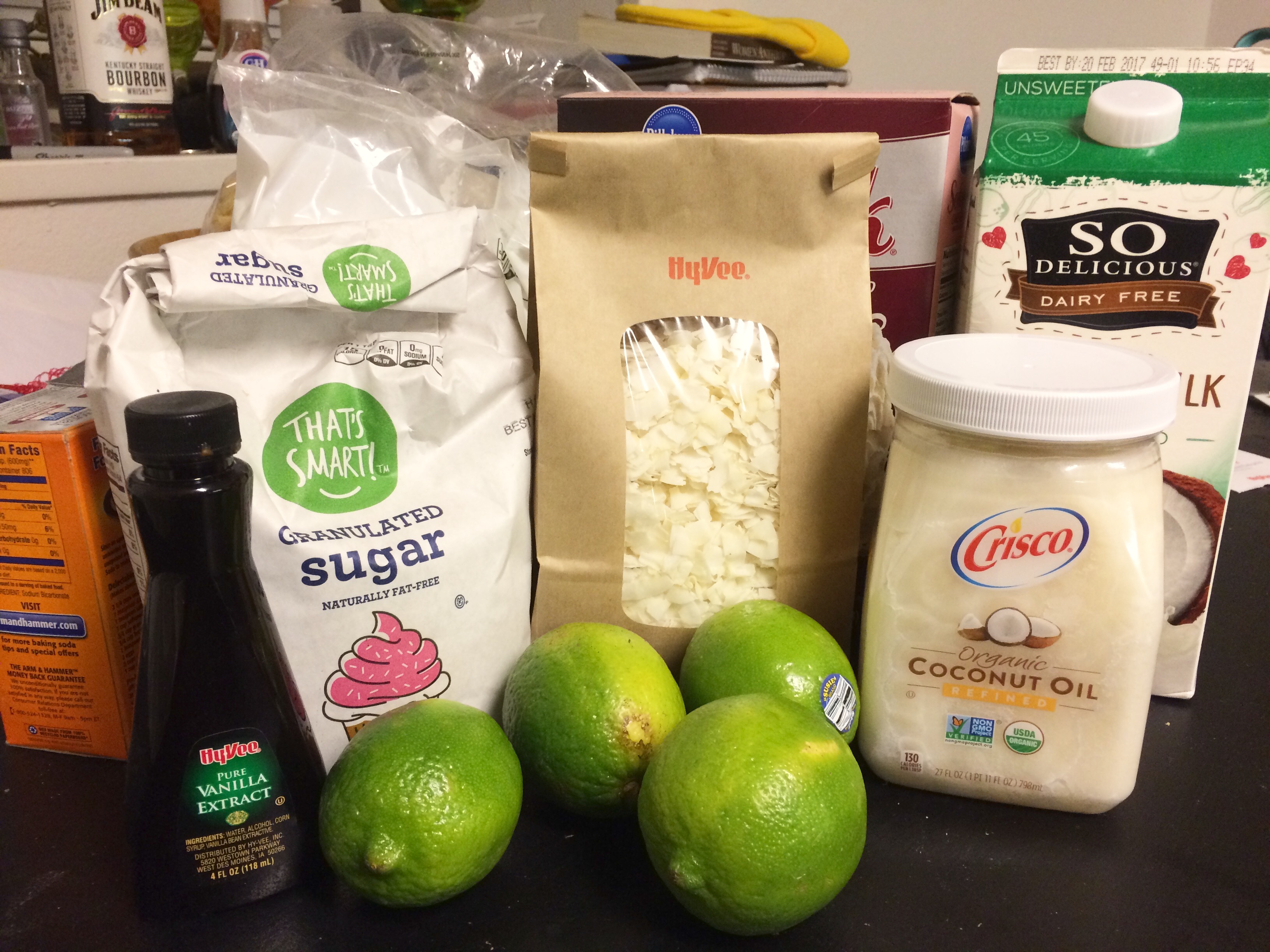 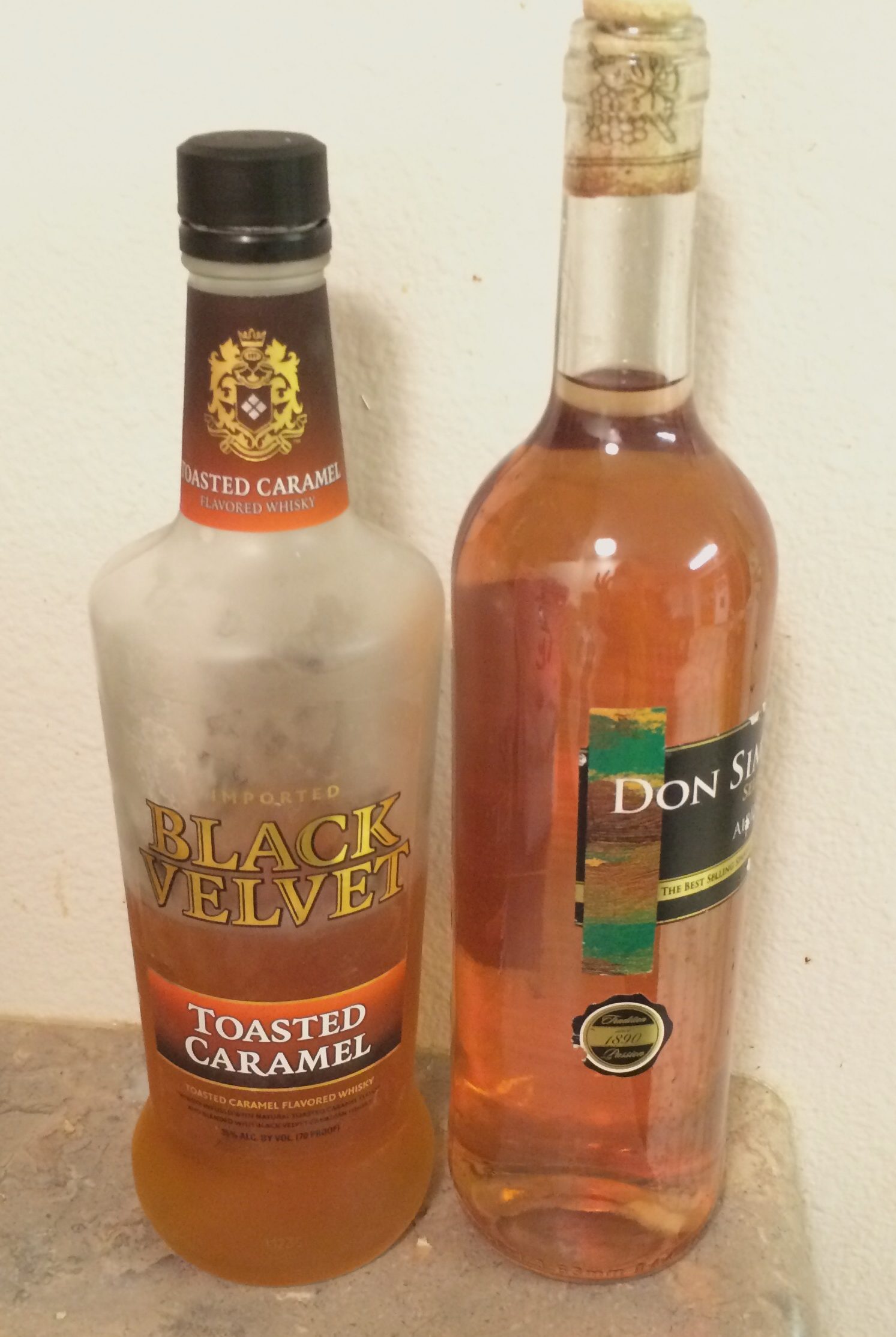 What I’m drinking: I’m not generally a huge fan of wine, but my mom sent me back from Thanksgiving break with four bottles of homemade rhubarb wine so I figured I might as well tackle some of that. I drank part of a bottle a couple weeks ago but it didn’t exactly go down the easiest, so this time I mixed it with some sprite and that was a pretty decent starter drink. After I finished the wine, I mixed Toasted Caramel whiskey with vanilla coke and it might have actually been the best thing I’ve ever done. SO GOOD, 10/10 would recommend. Then as a bonus spur of the moment drink, since I was using limes I figured I pretty much had to do a shot of tequila. Had to, not want to; don’t ever accuse me of not giving this column my all because tequila SUCKS.

Challenges (besides being intoxicated): The grater we have did not work very well as a zester and I was struggling to get a decent amount of lime zest until I realized I could just kind of scrape it off with a knife. Also, doing shot of tequila. Always a bad decision.

My drunk opinion:  It’s okay, the parts with a lot of glaze are good. It kind of tastes like coffee cake.

Rylee’s opinion: “Is there ginger in this?” (…No) “Oh, well it smells like gingerbread. I don’t know how to feel about it.”

My sober morning opinion: It’s slightly better this morning, but it still reminds me of coffee cake. Not very refreshing or springy.

I combined two different recipes for this, so if you want to test it out the cake recipe is from here (it’s a gluten-free recipe but I just used regular flour instead of gluten-free flour) and the candied limes and glaze recipe are from here. The only other modification I did was adding lime zest to both the batter and glaze.

Looks like next month’s column will arrive just in time for Valentine’s Day, so that should be interesting, feel free to check back then.

(Bonus: me complaining about taking a shot of tequila) 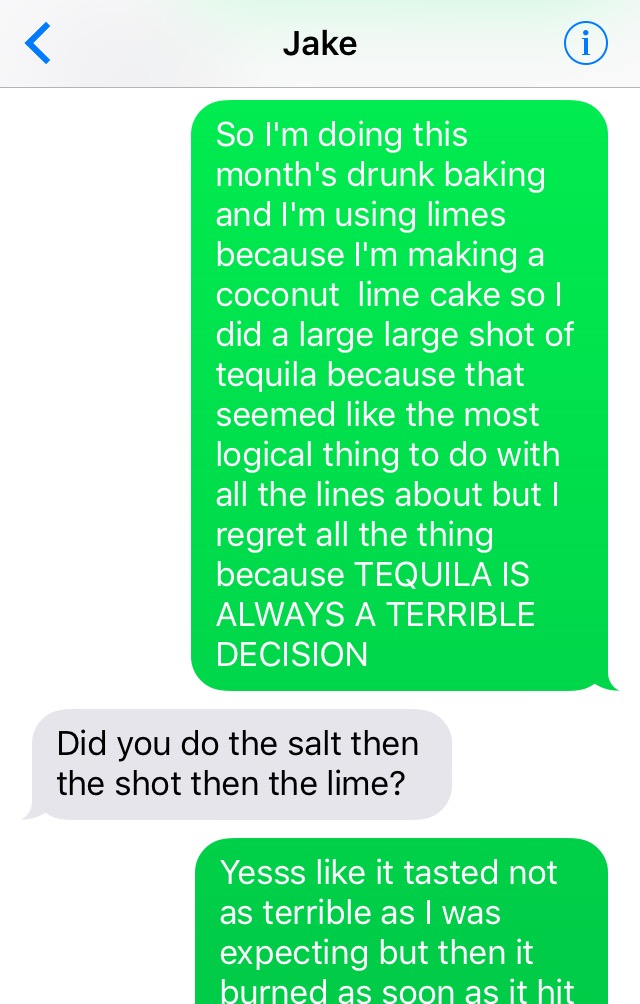