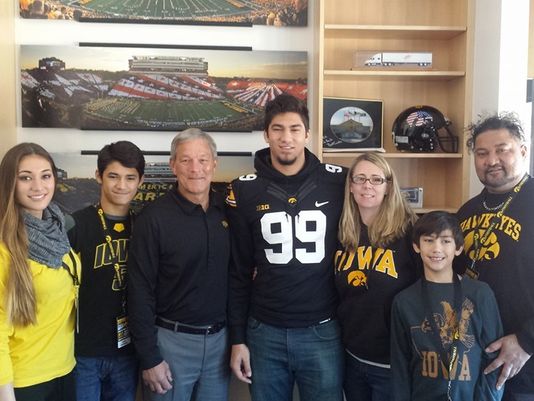 Tampa, FL—- Well that didn’t go according to plan. Thousands of you brave Iowa fans traveled down to Tampa in hopes of seeing the Hawkeyes continue their hot streak. Unfortunately, the 2017 Outback Bowl resembled last year’s Rose Bowl where the Stanford Cardinals overwhelmed Iowa by a score of 45-16.

I know it’s not what you had hoped for and it’s certainly easy to pick out the negatives by pointing the finger at the coaching staff and players. Even in the 30-3 blowout, there are a few positives to focus on.

We have to stop for a minute and recognize how lucky we have all been to watch Desmond King play in these last four seasons and especially in his senior season. King could have easily passed up his final year at Iowa for first-round money in the NFL Draft.

Instead, he chose to return to Iowa and he didn’t disappoint in his final season. Opposing offenses looked the other way early and often allowing the Hawkeyes to often neutralize the opponents best weapon.

King finished out his career and at Iowa with an interception, the 14th of his career, and a kick return out to the 50-yard line.

Although the defense struggled today, we can still look forward to seeing middle linebacker Josey Jewell back for his senior season. Jewell finished the season with 124 tackles and will be the core of this Iowa defense in 2017.

Another bright spot is safety Brandon Snyder who looks like a completely different player compared to guy we saw in September. He’s managed to become a smarter while still aggressive safety who will instill fear in opposing wide outs. Snyder had a diving interception in the first quarter against Florida.

We didn’t get to see true freshman Manny Rugumba play today due to injury. Iowa fans have plenty to be excited about in Rugumba. He impressed everyone in the final 3 games of the season including a standout performance in knocking off #3 Michigan.

On the offensive side of the ball, the Hawkeyes will lose star quarterback CJ Beathard, RB LeShun Daniels, and their top TE, George Kittle. Although CJ will certainly be missed, Iowa fans can look forward to Nathan Stanley in 2017. Stanley was good enough as a true freshman that Kirk Ferentz was willing to burn his redshirt even with Beathard still clearly ahead of him.

We haven’t had the chance to see much of Stanley but in the chances we have, he’s been impressive. He helped lead the Hawkeyes down the field for a touchdown against North Dakota State when Beathard left temporarily with against injury.

We will all miss George Kittle being a reliable target and the life of the party but true freshman Noah Fant has given us plenty to look forward to. He didn’t play a major role in 2016 but he could be Iowa’s breakout performer next season.

Probably the biggest positive of this season was the rushing attack. Iowa had two running backs finish with over 1000 rushing yards. The best part? The better of the two, Akrum Wadley, might be returning to Iowa City for his senior season. Wadley is a versatile and elusive back who finished with 1081 rushing yard on the season. He averaged 6.4 yards per carry and he was second on the team with 32 receptions. We’ve now seen Wadley outperform Daniels multiple times on the big stage. LeShun Daniel finished his senior year at Iowa with 1058 rushing yards.

“I’m fifty-fifty about coming back,” said Wadley. When asked if he felt he was ready for the NFL he responded with, “I definitely feel like I’m ready.” Make sure to follow KRUI on Twitter for more news regarding Akrum Wadley.

Did I mention that Iowa also gets Matt VandeBerg back? The wide receiver had his senior season cut short after breaking his foot but he was awarded a medical redshirt and will be a boost of experience for the 2017 team.

One last player to highlight has yet to appear in a black and gold uniform. A.J. Epenesa is a four-star defensive end that is expected to wreak havoc in the Big Ten next season. If you haven’t heard about this kid yet, you’ve missed all the hype. He received offers from Michigan, Michigan State, Ohio State, Florida State, Alabama, and many others but he is committed to play in Kinnick Stadium.

So was it the season that we had all hoped for? Maybe not, but it was still a successful year. Just remember the good times like the complete domination against Iowa State and the stunning upset of Michigan. And of course, there’s always next year. If that doesn’t seem to be enough, just ask yourself this. Why are you an Iowa fan?