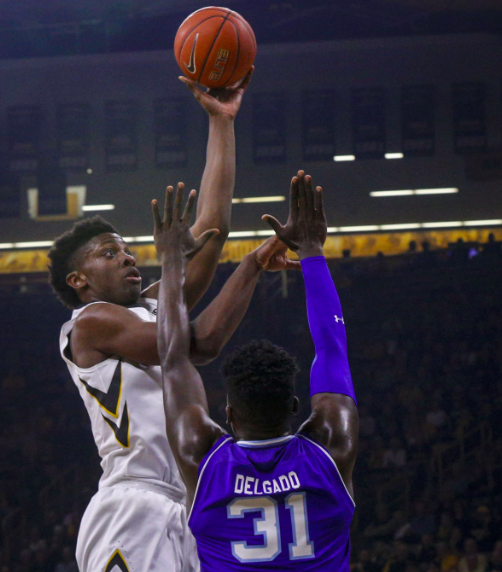 IOWA CITY, Iowa – The Hawkeyes and the Pirates of Seton Hall went down to the wire last night in a game that featured 11 lead changes, but it was the Pirates that would escape Iowa City with a 91-83 victory in this Gavitt Games matchup.

The new-look Hawkeyes (2-1) faced their toughest test as the reigning Big East champions came to Carver-Hawkeye Arena, and the team struggled with turnovers against a bigger, quicker opponent. The Pirates (3-0) managed to record 21 points off of 17 Hawkeye turnovers.

Every Hawkeye that took the floor had at least one turnover with the exception of freshman Isaiah Moss, and the two Hawkeye point guards, sophomore Christian Williams and freshman Jordan Bohannon, each had three turnovers on the night.

“You can’t have 17 (turnovers) against a team with the caliber of Seton Hall,” said Head Coach Fran McCaffrey after the game. “The length, quickness, and power of this team is unlike what [we’ve] seen.”

The turnovers obviously did not help the Hawkeyes’ case, and the Seton Hall defense played a big role in making things difficult on the Iowa ball handlers. The Hawkeyes also went just 19-32 from the free throw line, which Coach McCaffrey says is not something he expects to continue.

“We’re better than that,” said McCaffrey.

Much of the talk after the game was that youth may have played a factor. Although the Hawkeyes only played four freshmen, many of the key players on this team were role players on last year’s team that started four seniors and current senior leader Peter Jok. McCaffrey and company agreed that communication was the main reason for the defensive struggles, not youth.

“We had a pretty experienced team out there that did not defend,” said McCaffrey. “We have to get better.”

The Pirates had 50 points in the paint against an Iowa team that has decent size all across the board, and the team knows that missed defensive assignments and not protecting the rim made the difference in the game.

“We talk about defense all the time,” said Jok. “Tonight we didn’t do a good job, and I think that’s one of the main reasons we lost.”

On a bright note, freshman Tyler Cook put up a career-high 24 points and shot 60% from the field, but he also showed some growing pains as he went just 5-12 from the line and struggled to keep the Seton Hall big men off the scoreboard. Cook emerged as a potential go-to guy for the Hawkeyes in just his third game, which gives the team a lot of confidence in him moving forward.

“I liked a lot of the things he did,” said McCaffrey. “As he figures it out, he’ll get even better.”

The Hawkeyes’ struggles overshadowed some of the bright spots, but the team has plenty of time to address those issues as the season is still just getting underway. McCaffrey seems confident that the team will be able to bounce back and get the communication issues straightened out as they move forward and get accustomed to playing some tougher opponents.

The team is back in action Sunday as they take on UT Rio Grande (0-3) inside Carver-Hawkeye Arena at 4:30 P.M. CST.