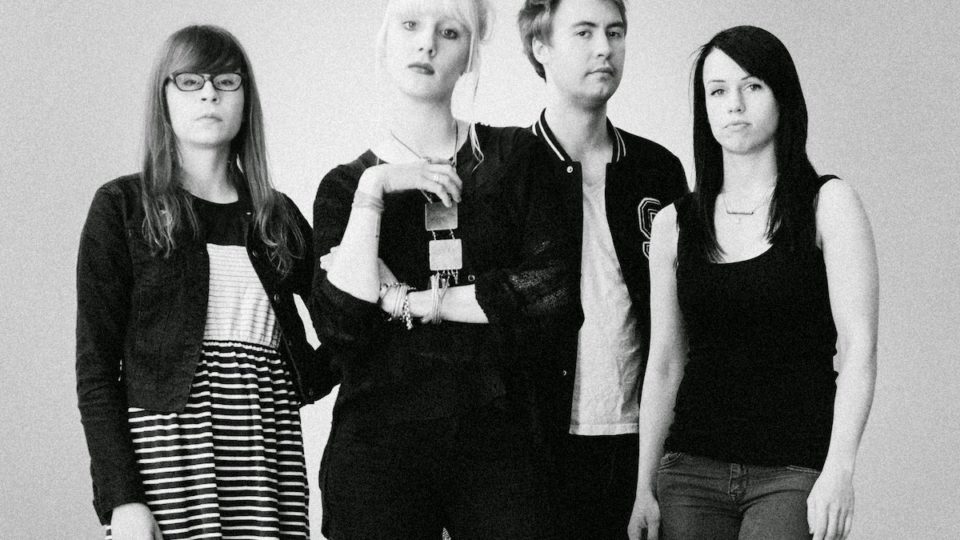 I walked into Gabe’s on the night of November 4th to hear three bands that I’d never heard of. Night Stories, NE-HI, and White Lung would be playing at the venue that night and I really didn’t know what to expect other than the general genre of rock.

I’d never been to the venue before. The ceiling had beautiful twinkly lights that cascaded from one side of the room to the other, and the stage was illuminated with the perfect amount of green neon light. There was plenty of open seating since most of the people waiting were standing around the open floor, so I chose a seat secluded enough that I wouldn’t be overwhelmed but close enough to the stage that I could still see what was going on.  The crowd was thin when I arrive a half an hour before Night Stories began. A lot of people are conversing about the bands that they are here to see, most of which respond with White Lung. I run into a few people I know and some people that I don’t, all very nice and wondering why I was the only person there taking notes. The majority of the crowd is, slightly to my surprise, middle-aged, which would only continue to be truer as the night went on.

Night Stories begins their set at ten pm. The duo containing Greg Meister and Phil Young has a unique backstory. The two discovered their love of fear represented in music in a dark basement, and they are known for only laying shows on Friday the 13th or during the month of October. The two of them pair horror films with their music and create soundtracks to the films that are chilling to the core, creating a multimedia experience at every show they perform. The duo curated their performance on Friday night specifically for Witching Hour.

Even though I knew that people were waiting around for one of the two other bands to play, they were still interested in what Night Stories had to offer. Everyone was watching what Meister and Young were doing because, if the crowd was anything like me, they hadn’t seen anything like it in person before.

I would almost call it more of a performance art piece more than a traditional set for a concert. The music was robotic and rigid while also soothing, which was something I was curious about. It was easy to see where the band members drew connections with the film playing on a screen in the background and the music that they composed as its recreated soundtrack.

As Night Stories’ set ended far too soon (I wanted to see what else they could create), the movie screen was taken down and the next band, NE-HI started doing their sound check.

NE-HI is a group of four guys: Alex Otake, James Weir, Jason Balla and Mikey Wells. It was hard to determine what kind of music they would be playing during their sound check, but it was easy to see that the band members loved what they were doing. Even from afar, I could tell that they were excited to start playing their show. More audience members dressed in their finest rock concert garb entered Gabe’s, and the volume of conversations around me increased as people were becoming more obnoxiously intoxicated.

I assume that more people are coming to see NE-HI perform since they were here for last year’s Mission Creek Music Festival, and people are ready to see more of what they’ve come up with.

Something I found interesting from the beginning is that their first song melded perfectly out of their sound check. The band was aimlessly jamming out until it wasn’t anymore, and I was suddenly enthralled. As much as I really enjoyed Night Stories’ performance, NE-HI’s alt-rock style was something that I would listen to a lot more often, and probably will.

They guitarists moved with so much intention to the music, each of them independent to one another, but very much moving to the same beat. I could definitely tell which guitarist was playing which part even though I was further away from the stage. I think I would’ve appreciated a change of pace somewhere in the middle of the set, but it was still a show I enjoyed being at.

While NE-HI was tearing down, White Lung started to take the stage for their sound check. Throughout the process, the band would break into random song to keep the waiting audience interested and to start getting them ready for the performance. The entire time that they took the stage, the band’s chemistry was eminent. The members of the band were also unfairly attractive and had style I was envious of, but I tried not to let those things influence my view of the performance.

White Lung’s performance was loud and overwhelming and had so many things involved in it. The crowd was so full of energy and people were dancing, becoming more vigorous as the set continued on. The band played a lot of short songs, which was almost refreshing after listening to two bands that played longer tunes.

The metal/rock/indie hybrid songs all packed such a punch that I have no idea how the members of the band weren’t exhausted after every one. Their stage presence and ability to make the crowd feel their energy was the most important and fascinating part of their performance. Even though I probably wouldn’t listen to their music again, it was a great set to witness.

I thought that this set of performances was an interesting group: very different from one another but perfectly juxtaposed together. It gave me a fantastic first look at what Witching Hour is about.

On November 5th, I will be attending Jen Kirkman’s stand-up comedy show at 9PM at the Englert Theater. Keep an eye out for the article!