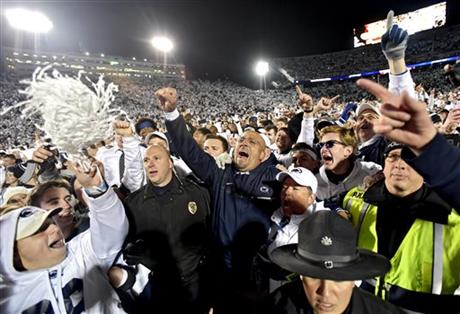 STATE COLLEGE, Pa. — The Iowa Hawkeyes (5-3) travel to State College to take on the Penn State Nittany Lions (6-2). Beaver Stadium will be a hostile environment and will be a test for the desperate Iowa team. Here are the keys to success for the Hawkeyes

Get the run game going early: With the loss of star WR Matt VandeBerg, it’s no surprise that the Hawkeyes go to plan will be running the football. The Hawkeyes will need set the tone early with the run game to help open up the passing game and to keep their defensive fresh.

Take what the defense gives you: Even when there’s nothing there, we’ve seen CJ Beathard try to make a big play happen. With the lack of explosive playmakers, Iowa will need to take any yardage they can get to move the chains. The offense will have to sustain lengthy drives to keep the dynamic Penn State offense off the field.

Force Penn State RB, Saquon Barkely inside: Barkley has 888 yards and 10 touchdowns on the season while averaging 6.0 yards a carry. He is an athletic back who does most of his damage on the outside. Iowa will try to force Barkely back inside where their big body defenders dominate.

Get creative: Iowa has one of the most predictable offensive schemes in college football and they have lacked explosiveness throughout the season. For the first time in 2016, the Hawkeyes will have both LeShun Daniels and Akrum Wadley on the field at the same time. Wadley will line up in the slot in an attempt to give the offense some spark. Simply lining him up in the slot won’t be enough. Offensive coordinator Greg Davis will have to get creative with his offense and play aggressively if he wants to keep up with the Nittany Lions.

Focus on the game… not the environment: The Hawkeyes don’t have any players who have played in front of nearly 107,000 crowd at Beaver Stadium. The hostile and deafening environment helped the Nittany Lions upset the Ohio State Buckeyes just two weeks ago and you can bet that this crowd will bring the same type of energy.

Survive and advance: For those who are hopeful for an Iowa return to Indianapolis, they know this is a must win game. Iowa can’t afford another loss if they realistically want a shot at returning to the Big Ten Championship. The Hawkeyes are currently on a 9-game road-winning streak and will have the opportunity to extend that streak to double digits.