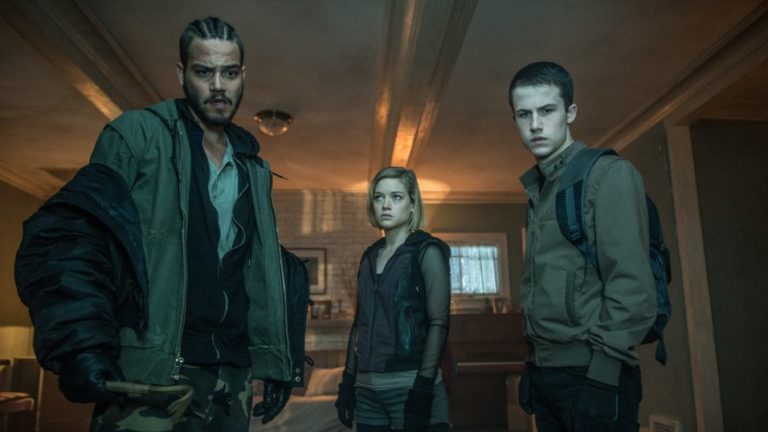 Remember when the horror movie scene was a barren, frightfully not frightening hellscape of slasher sequels and monster movies so B-grade that they wouldn’t even cut it as celebrities in a VH1 reality show? Me neither. I wasn’t allowed to watch scary movies when I was a kid.

Thankfully the horror film genre has seen a significant uptick in the last few years. Aficionados will tell you that there is no revolution happening as the indie horror scene has been pumping out original work for years. But when studio films reach that point, something amazing is going on.

Don’t Breathe, the latest in a slew of studio horror films that have garnered critical praise in recent years, keeps the nightmares rolling with a taut and tense home invasion story where the invaders are the ones at the end of the knife. The film is succinct in establishing its characters, giving us just enough information to actually invest ourselves in their actions.

A trio of bandits, Alex, Rocky, and Money, are eking out a living performing small time robberies in various homes throughout Detroit. Alex, the straight arrow, uses his dad’s security company connections to pick and choose the easiest houses and establishes a set of rules to keep the robbers safe.

While Alex is more tied to Detroit through his father, Money and Rocky seek to move away and establish a new life outside of the grimy wasteland that is Detroit’s urban center. In order to make that move, some of Alex’s rules will need to be broken.

Money hears about an old, blind war veteran that lives in a decent house in an abandoned suburb of the city and who happens to be sitting on a pile of three hundred thousand dollars.

What first seems to be an easy score turns out to be a gritty and disturbing journey into the abyss. The setting works perfectly with the heroes’ predicament, turning Detroits’ seemingly undisturbed urban jungle into a war zone where there is no where to run, much less hide. To say more of the plot would do a tremendous disservice to Fede Alvarez‘s film. It is superb in its pacing, in that it hardly lets up about twenty minutes into the film.

Add to that a run time of only 88 minutes and the film barely gives you time to catch your breath. Noteworthy sequences include a one shot take of the entire house in which many of its important contents are laid out, unknown to our invading protagonists. The camera lingers on a pegboard filled with gruesome tools, a gun carefully taped under a bed, as well as a bell and locked door that you know are important, but are not yet sure how.

The film is masterful and thrilling, with a memorable plot that contains just enough dark twists and turns to grab and hold viewers attention. A few carefully doled out laughs rounds out the experience. Do yourself a favor and watch Don’t Breathe with a crowd. The shared tension with fellow audience members makes the viewing experience that much more entertaining. If you can’t find a crowd, enjoy watching this one by yourself, in the dark. Just remember to breathe.

Watch and Talk is an alternative look at film. It is a column that discusses movies from all different genres. Films are not only reviewed, they are simply talked about. Watch and Talk looks at not only the entertainment value of movies, but also at their cultural aspects and impacts.