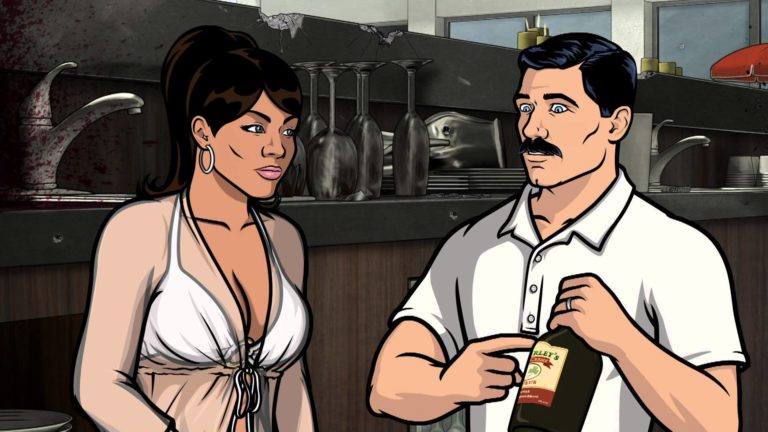 As evidenced in seasons past, Adam Reed has no qualms about tackling tough social issues and inserting his opinions into his creative work. Archer‘s fourth season, however, goes above and beyond in the social issues department. In every episode, some social or political undertone (if not full-on focal tone) can be isolated and identified. There were a couple epsidoes that stood out to me for their controversial material and sheer ballsiness.

So, Archer has a complicated relationship with sexual assault. On one hand, Adam Reed puts forth a conscious effort to make sure Archer’s sexual conquests are include (his idea of) consent. On the other, almost every other character has committed some form of sexual assault without experiencing much – if any – comeupance. On the third, biomechanic hand, the characters aren’t exactly lauded for their actions. One could even argue Reed is simply observing the casual way in which sexual assault — especially in the workplace and among friends/acquaintances — is treated.

I bring up the show’s history with sexual assault because in just the second episode, Reed drops a shitbomb on both the viewer and Archer. The episode begins with Archer finding out his long-time, no-see best friend Lucas Troy (Timothy Olyphant) has been killed, then immediately discovering the opposite. Archer wastes no time responding to Luke’s summons, which leads him to a decrepit B&B in Vermont. There, Archer learns that Luke 1) betrayed his fellow agents, 2) stole a shit ton of money, and 3) is in love with him.

Of course, the episode features countless moments of humorous tomfoolery to distract from the seriousness of Archer’s situation. The hilarious subplot of annual peer reviews almost makes you forget how terrifying it would be to be drugged and held against your will in snowy Vermont. Almost.

The weirdest, most cringe-worthy moment comes when Lana – who, accompanied by Cyril, was sent out to rescue Archer – finally bests Luke, via death by giant tree. Bleeding to death in the snow, Luke makes a final confession to Archer. When the two were in training for ISIS, they happened to get absolutely shitfaced. While Archer was passed out, love-struck Luke snuck into the room, suntan oil in hand with one thing in mind: rape.

The episode ends with Lana driving Cyril and Archer back to ISIS headquarters, Lana and Cyril clearly disturbed and concerned and Archer clutching a bottle of alcohol, unsure of how to deal with the recent turn of events. Of course, the situation isn’t later addressed beyond half-second references, so I would hardly call it an after-school special on sexual assault. Once again looking to the other hand, it could also be Reed once again making light of an observance: the silence and ignorance that male rape victims often face. However, that could always be a coincidence.

Next up on the social issues checklist: immigration. In this episode, Archer, Lana, and Cyril are charged with stopping a Mexican immigration ring from crossing the border into Texas. Unsurprisingly, conflicting views on immigration come to light, with Lana, Malory, and Cheryl leaning right and Pam, Cyril and Archer leaning left. In the end, Archer aids the group in making their way safely into the States.

The episode is a great example of Reed’s ability to address a controversial, relevant topic without smacking the viewer upside the head with it. The mission fits in well with what ISIS typically gets assigned to do, and the conversation around it comes off as naturally as it would in a real-life discussion.

I love that Reed took the time to address such a relevant topic, and seems to be on the liberal side of the debate. At its roots, Archer is meant to persuade you to root for a character you normally wouldn’t – its titular antagonistic protagonist. Accomplishing this goal first requires Archer to be crass, insensitive, and an undeniable asshole. However, Archer must have redeeming qualities, which include – but are not limited to – an awareness of social issues, a keen sense of justice, and a belief that people should treated a certain way because of who they are, not what they are.

Archer is available on Netflix and Amazon Prime.