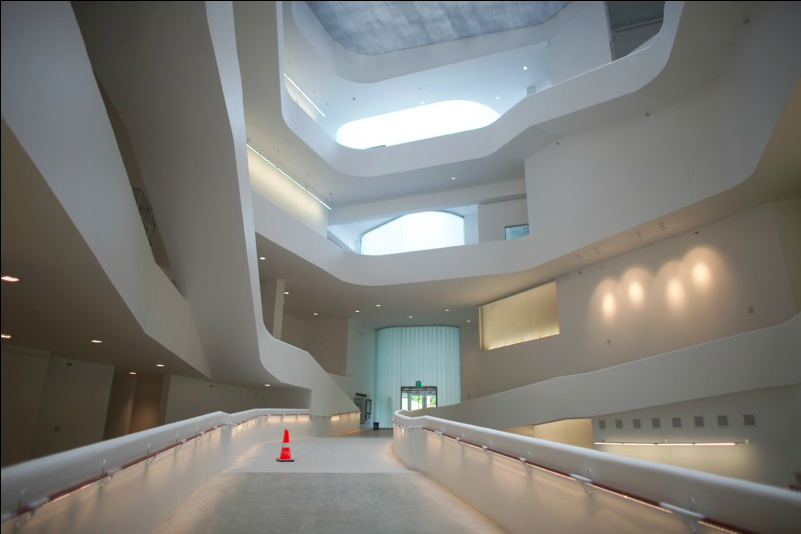 Since the summer of 2008 up until May 13th of 2016, students enrolled in art classes were taking a bus to a renovated Menards to learn. The Studio Arts building was moved to a location about three miles away from the University of Iowa campus due to extreme flooding in 2008. Art Building West (ABW) , also flooded in 2008, reopened for classes in 2012 but didn’t have far enough space or resources to hold all art classes. And so the Studio Arts building remained in the old Menards.

As most anyone (excluding home renovation fanatics) could tell you, Menards stores are not the most creativity-inducing environments to be in. As a fellow Art (and English) major, Aimee Fredericksen said, “I enjoyed my art classes in the old studio building, but at times I felt like I should have been buying a new ceiling fan or gardening supplies instead of drawing.” It was difficult to focus in the empty-feeling building, and the cubicle walls around every classroom didn’t help anything. I realize that there wasn’t much else for the building to be moved to a temporary space. As art major Melinda Ehrp told me, “The old building was a nice space, and the university definitely did the best that they could.” But everyone I’d ever talked to about the building pretty much agreed: it just didn’t feel right for what we were all trying to study.

However, as art students are probably learning, miracles do indeed happen. The university is being given the most beautiful gift: a new art building. The new building will be called the Visual Arts Building (VAB) and is located directly next to ABW (another true beauty). Even only seeing photos and the building from the outside, I know that VAB is the best-suited building that I could have imagined. It comes with five galleries, a seventy-seat auditorium, and a beautiful green roof.

Perhaps the most important factor of this new building (at least to me) is the supposed versatility of the classrooms. It seems to be such a simple change that can create more room for more collaborative projects between people and mediums. The building will house the grand majority of 3D- and 2D-medium-based classes.

The Visual Arts Building was designed with the help of Steven Holl, the same lead architect that built Art Building West. The main focus for Holl was natural light and open spaces as well as nature. Based on photos of the building, particularly the entrance, that goal seems to have been achieved. I can already tell that being in VAB will provide many with a peace of mind and creativity that just could not be achieved at the Studio Arts Building. The building is a gigantic step toward a higher-quality education for art students, and I am very excited for the change.