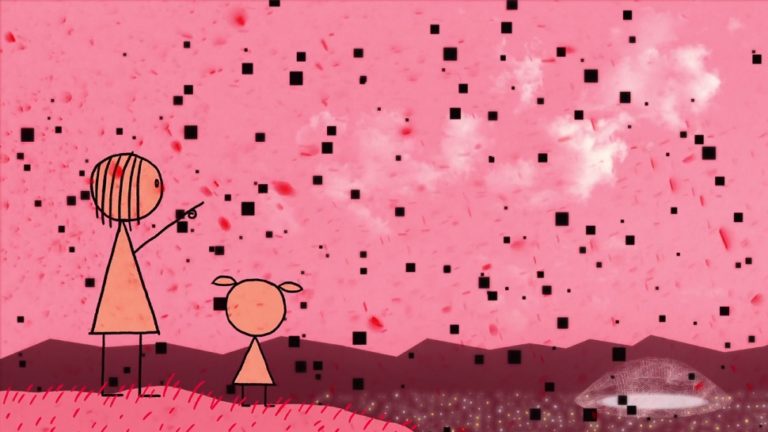 Watching movies is hard work. That may sound ridiculous, but when I am working forty plus hour weeks and taking care of a brand new puppy with my wife out of the country, I am starting to believe that. So, in my quest to watch one movie every day this year, I found myself in a morally murky situation. Do short films count as one whole film? Was I somehow cheating myself of a grander accomplishment by diminishing the amount of time I am watching movies? Surely, short films can’t contain the amount of cinematic gristle that I love to chew on every time I watch a new movie or re-watch an old favorite.

As it turns out, short films have plenty to offer in terms of visual and analytical brain food. I found myself viewing these short films multiple times just so I could gain a clearer understanding of their often obtuse themes. World of Tomorrow, directed by Don Hertzfeldt, is an Oscar-nominated animated short film. Don’t be fooled by its animation style. There may be stick figures and simple shapes dominating the drawn landscape, but this movie is not for children. The dialogue, almost exclusively given from the narrator Emily, is dense and overtly futuristic. One would think that summarizing a fifteen-minute film would be a simple task, but as I discovered, it is amazing what these filmmakers can pack into fifteen short minutes. Because the film is so tight, it makes each moment as important as the last.

World of Tomorrow paints an eery and colorful picture  of the near future where a young girl, Emily, is visited from a clone of herself two generations down the line. The plot is quite complex, which contrasts with the seemingly simplistic visual style. The clone of Emily goes on to explain to the young Emily how, in the future, humans are extending their lifespan by cloning themselves and giving their consciousness to their new selves, or by downloading their brain into a cube. And for the poorer citizens, simply taking the face of a loved one and putting it on an animatronic robot so they will always be with their family. The film is darkly comic, taking an exceedingly bleak view of human beings’ obsessions with technology and attempts to cheat death. It does not get any brighter at the end, when the Emily clone explains that meteors will soon destroy earth. Luckily however, World of Tomorrow is able to offer a simple token to the viewer when the clone Emily tells her older self to “Not lose time on daily trivialities…live well, and live broadly.” It is difficult to boil all of the obtuse language in the film down and find a singular lesson, but the film does an admirable job with that line. You can view World of Tomorrow in its entirety on Netflix.

The second short film I spend multiple viewings unpacking was Foxes, an Irish short film directed by Lorcan Finnegan.    Finnegan’s film is a little easier to find meaning in over World of Tomorrow, but it is no less of a joy to do so. Foxes has  a minimal amount of dialogue and lets the set, shots, and acting tell the story and set the tone whenever possible. The film tells the story of a young couple living in the sort of lonely suburban cookie-cutter housing development that would seem right at home in Pleasantville or The Stepford Wives. The cinematography emphasizes this with wide shots of row upon row of identical houses, giving the viewers a sense of suburban suffocation. Ellen, the young wife, takes refuge from the isolation through her photography. She soon becomes almost too interested in a group of foxes who live in the neighborhood, and sees them as a form of escape. Through Ellen and her obsession with capturing these foxes on camera, the film becomes a parable for the dangers of monotony and the trap of conforming to others’ wants and needs. The film also answers the age-old question: What does the fox say? And believe me, the other-worldly howling of these foxes is not so much cute as it is haunting and terrifying.

Finishing on a lighter note is the Oscar-award winning Feast, directed by Patrick Osborne. Feast reminded me of the many Pixar films that were capable of using very lighthearted and kid-friendly concepts to explore mature themes. It delves into a seemingly years-long relationship between a couple through the meals they feed their puppy. The dog’s first owner, a single, young, and unattached bachelor, feeds the pup a glorious feast ranging from fried chicken to pizza and fries. The food takes a turn for the healthier as the young man meets and eventually starts a relationship with an unnamed young woman. Very soon after, when the couple breaks up, the pup starts to receive his more favorable unhealthy treats. The pup may be happy with his food now, but he eventually notices his owner’s significant drop into depression. Again, kids will simply enjoy the dog eating and going through its own set of emotions while the very human plot developing in the background gives adults plenty to see and feel as well. Even though Feast is only six minutes long and clearly aimed at younger viewers, I found it to be the most emotionally resonant of all of the short films I watched. To this day, since I saw it in theaters in November of 2014 for the first time, it has stuck with me.

At first I saw short films as an easy way out of my year-long obligation. How easy it would be to simply gorge on three or four of them at a time and meet my quota for the next few days? What I began to realize, though, is that to do so is an injustice to the films and their creators. These short films come packed with vast amounts of thematic material, which is compounded by the fact that they need to complete their large amount of storytelling in such a short window of time. Because of that, I had to view all of these films many times to fully grasp them. Once I did, it gave me a deeper appreciation for the work that goes into all movie making, big and small.