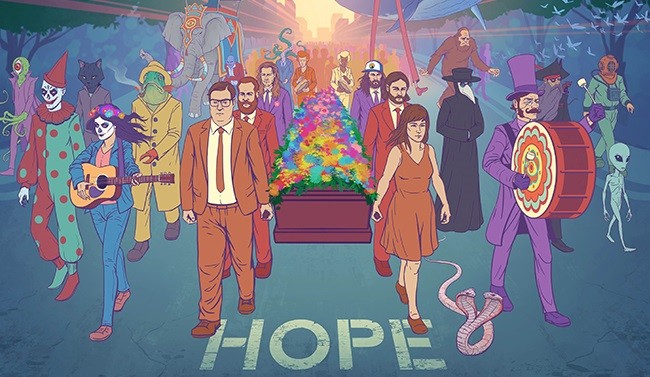 The Strumbellas, a Toronto-based folk rock band, released their third studio album in April. The group consists of six members: Simon Ward on guitar and vocals, David Ritter on keys and vocals, Jon Hembrey on lead guitar, Isabel Ritchie on violin, Darryl James on bass guitar, and Jeremy Drury on drums. As someone who is not too familiar with the band, I found the new album, Hope, to be quite enjoyable. They have a fairly standard and approachable folk sound that is very easy to listen to, but has enough variety in the instrumentation and vocals that the songs never get too repetitive.

The album’s beginning and end are its definitive strengths, starting with the most popular song from the album, “Spirits.” The song is extremely anthemic, meaning it is somewhere between catchy and almost monotonous, but in a good way. The main theme is repeated many times throughout the piece, and thank goodness it is such a treat to listen to! You will no doubt  find this song sticking somewhere in the back of your brain long after you have turned this album off. The lyrics are appropriately somber and somewhat confusing, which seems par for the course with many folk albums. You could find yourself simulaneously uplifted and deeply saddened by many of the songs throughout Hope.

The next two songs, “Shovels and Dirt” and “We Don’t Know,” follow a very similar structure to “Spirits.” They contain a very repetitive chorus and will be likely to stay with you well after you finish the album. The difference between the two is in tone and vocals. “Shovels and Dirt” gives itself a much darker tone primarily through its lyrics. While the majority of the songs on these albums are at least somewhat melancholy, “Shovels” is the darkest of the lot. In spite of this, it ended up as my favorite out of the three opening anthemic songs. “We Don’t Know” almost feels like a retread of “Spirits,” but its slightly more poppy feel and awesome violin riff in the bridge section make this song work on its own.

“Wars” takes a slight turn from the chanting vocals of the first three tunes, and it is a welcome one. The singing becomes less layered, which at least makes for a more unique listening experience. “Wars” also features both a very catchy solo guitar line in the first half and an acoustic section in the second which act as nice flip sides to the same song. The next tune, “Dog,” has a nice shuffle feel that takes a large departure from the previous four songs. Listening to “Dog” makes it feel appropriate to call The Strumbellas not only a folk band, but also a group that leans toward different genres such as bluegrass. This departure not only in style but in tempo, rhythm, and general feel makes “Dog” a favorite for me.

“The Hired Band” slows things down to take the form of almost a pop ballad. This makes it very easy to listen to, but does not make for a particularly replayable or enjoyable song. To get out of the pop ballad funk, The Strumbellas turn to “Young & Wild.” It not only picks up the tempo, but adds a simple rock beat and the layered vocals of the earlier songs in order to get some energy back. Sure, it still remains repetitive as most songs in the album, but most good music is!

“The Night Will Save Us” follows “Young and Wild” and dials the energy back a little bit with an acoustic-fueled song that has a very unproduced sound. All instruments are featured appropriately with the violin getting a brief but affecting solo and simple harmonies and guitar chords acting as the driving force of the song. “I Still Make Her Cry” is probably my least favorite piece from the album, but it’s mainly because it is just not my kind of music. Once it started with solo mid-range vocals and piano I knew this one wasn’t for me. The only other instrumentation found in the song is the very occasional symbol roll. Even those are so few and far between that you can barely even call that a feature of the song. So far though, “I Still Make Her Cry” was the only song where I did not find something to enjoy. Luckily for me however, the best song of the whole album was up next!

I loved “David,” and no, it’s not just because I’m a narcissist (although that may have had something to do with it). “David” reminds me of those old pseudo-blues Bob Dylan-inspired songs that I always find myself to going back to. From the slightly harsh vocals to the twangy guitar and gently lifting beat, I absolutely love this song. It even has an approprately simplistic guitar solo that rocks just hard enough to give the tune a definitive rock style. “Wild Sun” rounds out the album and I makes me wish, just a little, that “David” was the last song.

“Wild Sun” returns to the chorus-centered structure of the first three songs while gently shifting between somber and lonesome vocals with acoustic guitar and the only barely memorable chorus. Obviously these anthem songs are The Strumbellas bread and butter tunes so I suppose it is typical that they would finish with a song that fits right in with their style. Still, slightly sluggish middle and ending aside, I greatly enjoyed this album from a band I don’t usually find myself to listening to. And seeing as I still have some of these songs stuck in my head well after listening, I think this one will stick with with me for awhile.