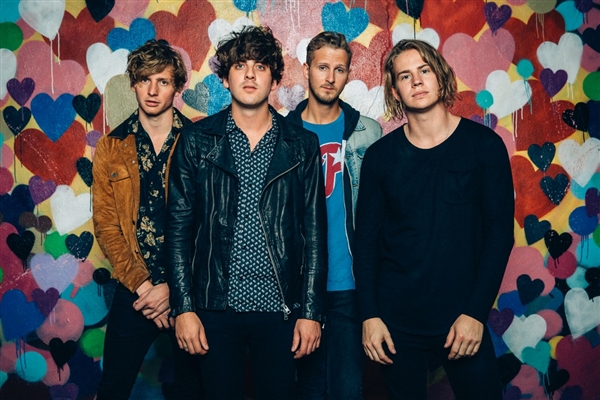 Liverpool local band, Circa Waves swam their way to the surface in 2015 with their debut album Young Chasers. Known as the indie-rock/alternative boy band in the UK, Circa Waves quickly made their upstream in their first United States performance on Conan.

Setting sail in beachy tunes, the album comes off with those “summer” and “feel good” vibes making it hard to resist it being the track you blast in your car with your friends driving down to the beach.

“Get Away” starts off the record with its upbeat jingle. Kicking off their album with a strong guitar and drum background sets this song up to be a definite hit for the summer.

Second on the track and my personal favorite is “T-Shirt Weather.” This was the first song I heard of Circa Waves. The chorus: “I remember t-shirt weather/I remember some days/We were singing our lungs out in the backseat together/And the seatbelts were burning our fingers/In the T-shirt weather/I remember sleeping til the early afternoon” reminds me literally of the moments I’ve made with my friends in my car singing our lungs out and the future memories I still have yet to make.

“Fossils,” “Lost It,” and “My Love” all carry the same guitar tune that you can’t help but nod your head to. Because of this familiar sound in almost every number on the album, critics may say what the band is lacking in identity they make up in live performances. However, some may beg to differ that this is what makes the UK band so easy to relate with: their sound. It’s easy to pick out any song of theirs because it carries the same tune throughout the album. Like the ocean (sound), each current (song) moves in unison to perfect the perfect wave (album).

As track number six rolls around, “Deserve This,” the buoyancy takes a downward spin into a more slow and some may say elegant approach. With a quick turn around to number seven, “Young Chasers” we have the granddaddy of them all. Although the shortest song on their track, it is also what the album is named after.

“Good For Me” is your classic ‘it’s not you it’s me’ break up song. Lead vocalist Kieran Shudall sings “You’ll see, you’ll see I’m just no good for me.” The first few lyrics expresses how she was the only one that really knew him and how the roads felt like home but as cliché as any relationship, it ended with the “I’m no good for me.”

Another one of my personal favorites is “Stuck in My Teeth.” It relays the message that along your journey you will meet people that will want you to change and you can but it can’t be for them, it has to be for yourself. “And though you take me for a fool/I’ve got better things to do/Than to prove myself to you” are just some of the verses that showcase this message.

“Best Years” is a song every college student can relate to. College opens so many doors, some good and some bad. This track takes a more rural route by demonstrating how “we are flying through our best years” but getting lost along the way and sometimes we just need a friend “to take me out tonight.”

“The Luck Has Gone,” one of their not-so-popular songs, carries that distinguishable guitar note throughout. Maybe one of their saddest yet most applicable songs, “Lost It” tells

the story how the heart can be easily captivated by love but you have to “give up on her, again/And I see you think about her/Your soul’s been took/And you wish you never seen her/You wish you never looked” because you know you can never have her.

Wrapping up their debut album are “Talking Out Loud” and “100 Strangers.” While both songs compliment each other, they also contradict the main character in the two stories. In the first one, the character is asking her to speak her mind out because I wear my heart on my cheek; whereas, in the follow up, the father has to ask Spit your words out son They cling to your lips like they’re trying to hold on.

I really didn’t want to hate this band but at the same time I can’t say they gifted me with a new summer playlist. Looking forward, I am excited to see if they will be a one-hit wonder or produce more songs. Either way, I’m sure we will be able to spot any of their songs with their repetitive sound and contagious charisma.