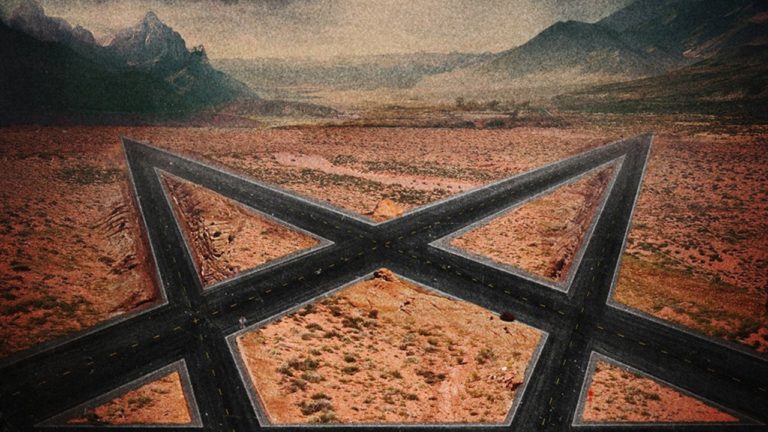 Southbound is a new horror-anthology film, produced by Brad Miska, who also produced the V/H/S horror-anthology series. The film features five different horror vignettes that interlock together in eerie and mysterious ways. The film premiered at the 2015 Toronto Film Festival, and has since been released theatrically.

Personally, I’m a pretty big fan of horror-anthologies. If done correctly, they manage to strip away much of the generally ineffective plot and character development that bog down so many horror films, and skips right to the good stuff. Of course, plot and character development are not bad things, but with a niche genre like horror that often times serves a very specific purpose, to scare the audience, these narrative devices can often times get in the way of the real thing the audience is after. Obviously not all horror films should shirk these aspects of their movies, but if you’re clearly just out to scare the audience then you often don’t really need to get to know the paper thin characters all that well. I’m a big fan of the V/H/S series, and I think they did an excellent job of really honing in on the scary moments in each short film, making the entire movie a really great time-to-scare investment.

Southbound does this fairly well to, but in all honesty I think it falls flat compared to V/H/S series. While the V/H/S movies usually played around with more generic tropes, and were only very loosely connected, Southbound explores fairly unique situations, and each vignette is clearly tied together within the same world. Unfortunately, the fact that the scary situations each short film creates are rather unique, their short time frames end up hurting the overall product. Because we’re not super familiar with the generic content, we as an audience need a little more time to understand what’s going on in each short.

Redemption and retribution for past sins is a constant theme in Southbound, and is explored in every vignette. Usually these sorts of themes make for compelling horror films, adding a sense of inevitability and fate to the drama. However, the anthology format again means that the troubled past these characters are running from is not given enough time to be explored or explained. Horrible crimes are hinted at and alluded to, but ultimately the audience is left without enough information and without enough attachment to the characters to truly feel involved.

Another major difference between Southbound and V/H/S is that each V/H/S short was a “found footage” film. Maybe I’m just biased, but for reasons I can’t quite put my finger on, I think this format works better in an anthology film. All of this is not to say that Southbound doesn’t have its moments. The inescapable demons in “The Way In/Out” are truly creepy and will surely plague my imagination the next time I’m driving on the seemingly unending open road. “The Accident” was also a particularly chilling tale, and I think it was the strongest effort throughout the film.

Overall, Southbound is an OK entry into the anthology horror genre. Don’t expect to find anything groundbreaking or particularly exciting here, but if you know you just want some cheap horror thrills, there is plenty here to deliver.

Click here to see if Southbound is playing in a theater near you. Check out the trailer for the film below: