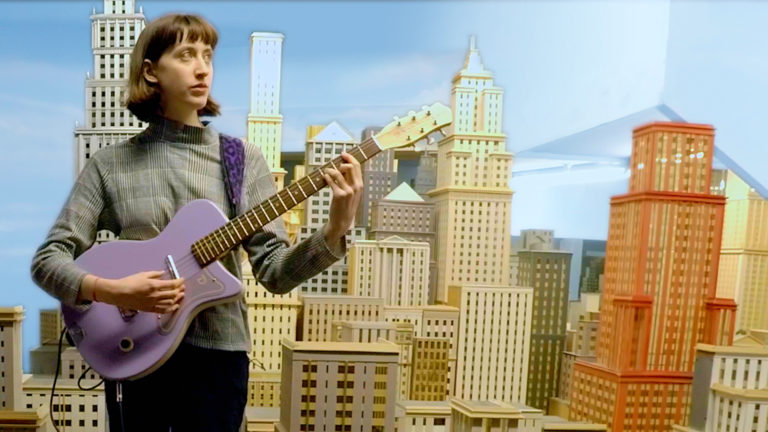 Greta Simone Kline goes by many names. There is her birth name, given to her by her father Kevin Kline and her mother Phoebe Cates. There’s also the stage name that she first started performing under; Ingrid Superstar. Ingrid Superstar has 15+ releases under name, most of which came out in 2011, but that’s still not Kline’s most famous persona. Performing now under the name of Frankie Cosmos, she has released her newest album Next Thing.

Next Thing comes as the latest installment of what can only be called a prolific artistic output; there have been 21 releases under the name of Frankie Cosmos, in addition to the previously mentioned works. While not offering anything wildly different from her previous albums, Next Thing seems slated to be Frankie Cosmos most popular work to date.

For the most part, her musical style remains relatively unchanged from her other non-acoustic works. Each song is a short, sweet, and nicely packaged soft indie rock message. The instrumentation is fairly sparse, featuring little more than a guitar, bass, drums, and the occasional synthesizer. Frankie’s vocal deliverance is always subdued and relaxed, even when her lyrics offer a glimpse into more heartfelt emotions.

The album, which contains 15 songs that are mostly under 2 minutes, begins with “Floated In.” This song serves as the perfect introduction to the album, and gives you a general idea of what’s to come. The bass drives the song along at a nice upbeat tempo, and Frankie’s soft delivery and airy voice make for a relaxed by joyful atmosphere. This vibe continues on through “If I Had a Dog,” “Embody” and “Fool“, and that’s about when the major flaw of the album becomes evident. All of these songs sound the exact same. If you’re not listening carefully, it’s easy to miss when one song goes into the next. And this doesn’t come across in a “Oh yeah, everything is so neatly tied together on this record” sort of way, but more of a “what is the difference between this song and the last four that I’ve listened to?” sort of way.

Things slightly shift with “Too Dark” and “Tour Good“, when the tempo takes a few steps back. Unfortunately, I wasn’t as big of a fan of this particular vibe, and with “Too Dark” being the longest song on the album it was the only one that I felt truly tempted to skip. “Interlude,” which consists of only vocals and a synthesizer, is fairly interesting and unique for the album, but of course it only clocks in at 45 seconds.

Things begin to pick back up again with “I’m 20“, a song about feeling washed up at the age 20. “On the Lips” was one of my favorites in the record, with its humorous yet thoughtful lyrics like “I watch David Blaine, find myself believing, in many things, in anything.” “Is it Possible/Sleep Song” is also a favorite, as it is one of the most fun and upbeat jams on the album. “Outside with the Cuties” teeters between heartfelt and downright cheesy, with lyrics like “I haven’t written this part yet” really bringing the mood down, and making me feel like there was not a ton of effort put in to this project.

The album finishes rather unspectacularly with “O Dreaded C Town.” It seems almost fitting that the album would end with such a pedestrian song, and in total it feels like a perfect microcosm of a record that has been not terrible, but ultimately very forgettable. It was only after my initial listen through that I learned that some of my favorite songs (like “Embody,” “On the Lips” and “Sleep Song”) were actually re-releases of previous acoustic songs. Overall, this leaves me a little skeptical of Frankie Cosmos, and I’m certainly in no hurry to scour through dozens of other projects.