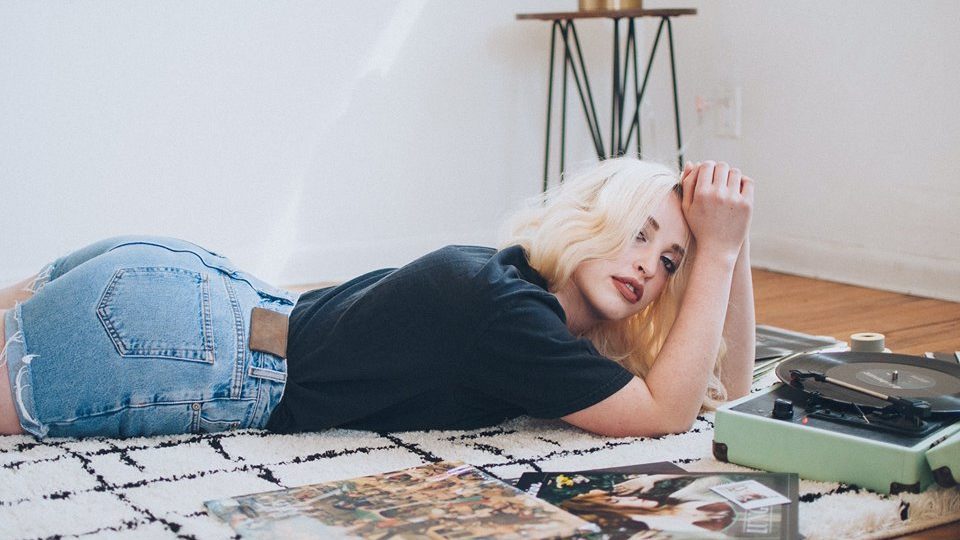 Most musicians are lucky if they can write a handful of semi-decent songs in the course of less than half of year. Elizabeth Moen has not only written an eight track debut album, but she’s also recorded it, released it, and sold out a local Iowa City venue, The Mill, for the first time in a long time (for a local act).

In January of this year, the 22 year old released her debut album Songbird, which she recorded at Flat Black Studios just outside Iowa City. At the time of her album’s release, Moen had been writing her own lyrics and music for just 5 months, and to date a shockingly short 8 months.

Moen is a bleached blonde, very slender woman, who you’d be surprised to know has hidden in her the pipes of seasoned soul singer. She’s been playing guitar for eight years, and singing since she was very young.

Though Moen is not one for clichés, she does however fit the bill for one: a big fish in a little pond. She grew up in the small pond of Vinton, Iowa, just an hour northwest of the larger pond of Iowa City. Her home town consists of less than 5 square miles, and has a population of roughly 5,200 people.

Now Moen’s in a much larger city, and opened for indie rockers Houndmouth at the Englert in April.  She landed the gig after the band listened to her album and loved it. Now, every weekend she plays at least two different shows in Iowa. The momentum she’s gained in the Midwest music scene is almost unheard of. So what is it about Liz Moen that has everyone talking, and why did she just start writing now?

It was 8:30 on a Sunday night at Short’s in downtown Iowa City. Liz Moen, walked in in her black platform high heels with two guitars and an amp in tow, with her bleached blonde curls draped over her black leather jacket. When she plays Short’s she always carries her equipment from her apartment which is just around the corner above the downtown Iowa City restaurant, Basta. Once she had set her stuff down in front, she strutted to the back, and sat at the bar.

Liz is usually behind the bar of Short’s bartending, but tonight, she’s playing a two hour set. Her coworker behind the bar, asks if he can get her anything before she plays, “Can I get a glass of Jameson, and a water?” she asked him. This is her order before every set she plays. The water is for her throat, the Jameson is to mellow her out. Though she says she doesn’t get nervous before sets.

However she was scared to initially start writing and performing her own music, “I think I’ve had the potential to write for a long time, I was just too scared to.” She said, “And now if I have that artistic ball rolling, I should just stick with it. I really don’t know why it’s been happening so fast, but I don’t mind it.” Moen said as she sipped her Jameson. “It feels right. I finally feel like I’m doing the thing I’m supposed to be doing. And now that I getting paid to do it, this could be my job, ya know?”

Music as a profession was in no way Moen’s plan up until very recently when she began writing her music, and got a very strong response, “Originally I was doing it as a hobby, until just very recently, it was just a hobby. Then I recorded this music, just to have it. But then it started to take off. And ya know people responded well, people come to the shows, other musicians want to collaborate, so it’s like why not ride this wave sort of thing?” she said.

She strutted back to the front of Short’s to perform in the poorly lit corner, with her back turned to the window that looks out to Clinton Street. She seemed bizarrely calm as she strapped on her guitar, adjusted her mic, and played a few notes on her newly purchased vintage 1968 Gibson ES-340 electric guitar, and gave her coworker a thumbs up and sparkling smile.

As she begins to sing, anyone who has heard her album will realize that it does not do her voice justice. The raw yet pure quality of her bluesy, soulful voice is something you do not hear at a local bar. A couple sitting at Shorts drinking beers at a table stopped mid-conversation as she began to sing a cover of the Kings of Leons song, “Use Somebody”. The man said to the woman, “She’s not bad” with a very pleasantly surprised look on his face. Though that is possibly the understatement of the century, it shows that you don’t necessarily get what you expect with Liz.

Her set consisted mostly original songs she’s written from Songbird, as well as a few new ones, and covers of everyone from Bob Dylan with “Don’t Think Twice It’s Alright”, to one of Justin Bieber’s latest hits, “What Do You Mean” which she prefaced with a shutout to her coworker and friend Andrew who was working the bar. Her slowed down bluesy cover of the 80s hit, “Dancing with Myself” by Billy Idol, is possibly the best you’ll ever hear.

Moen says she likes to switch things up with her covers, “I really enjoy taking songs that are not particularly the style of music I play, but then I turn it into it. Like taking old 80s upbeat fast songs and like playing them kind of slow, and like more soulful type of stuff. My favorites to cover from my genre, definitely like Bob Dylan, Johnny Cash, yeah those are my go to.”

After getting a round of applause from the filled bar/restaurant, she took a break, and came back to the bar. After a stellar performance that left patrons staring at her curiously, she discussed what’s on the horizon for her.

Moen, who is also a full time student, outside of her music and bartending gig, will graduate from the University of Iowa in May with a BA in French and a minor in Spanish. But she’s going to stick around Iowa City for a little bit longer, “I signed my lease for one more year. Just stay here, and really write as many songs as I can. Get better, with my instruments, just like try and grow as much as I can, just because it’s so cheap to live here and save up.”

A summer tour is next she says, “This summer I want to do a big tour of the Midwest, like just me in my car. Just do a gig in Chicago, Milwaukee, Madison, Minneapolis, and then Omaha, St. Louis, Kansas City.”

Next year this big fish will be off to an ocean. “Preferably I want to go to either Austin or LA. Just somewhere where like the folk, blues, bluegrass, rock, indie, all these different genres that I’m toying with that I like are.”

Moen says she feels pressure to pick a genre and label herself as an artist, but that’s not always so easy to do. “It’s hard for me to find a certain genre to be in because it varies within each song,” she said. “Even within songs themselves sometimes it sounds bluesy, sometimes it sounds folky, and I don’t even know, I’m just writing a song to write it.” 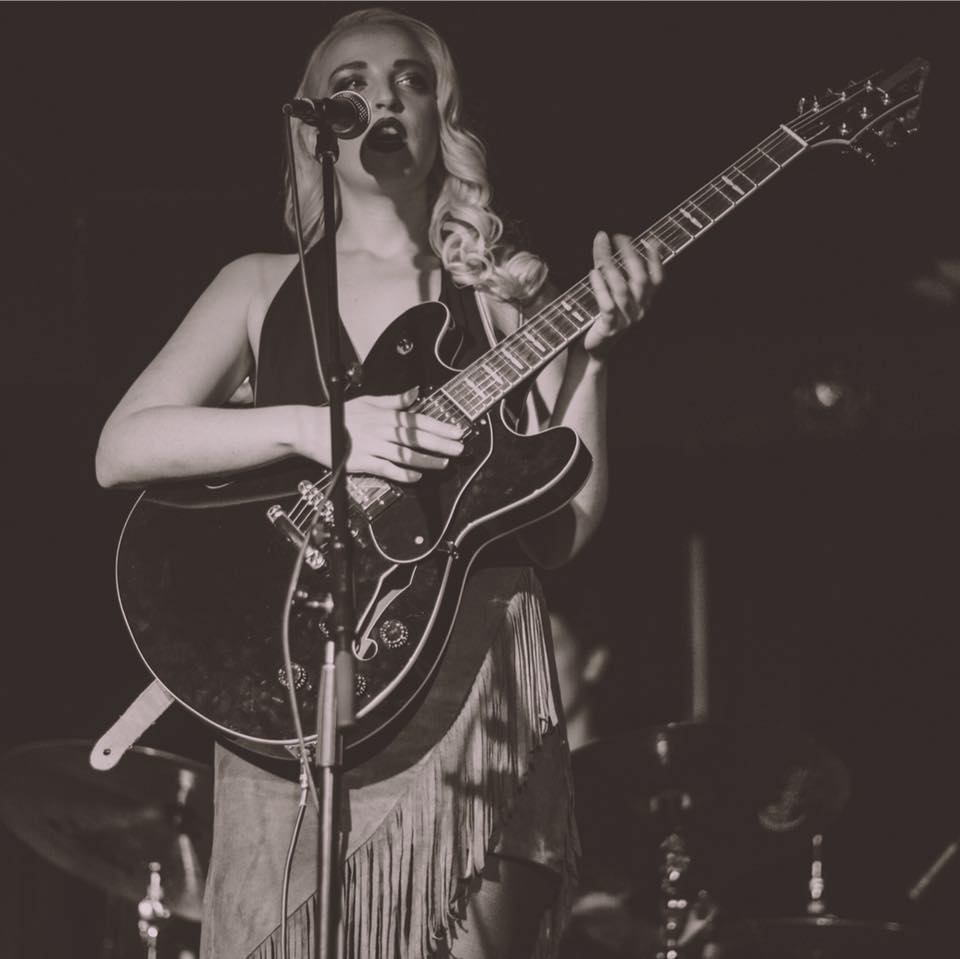 For now she’s just trying to graduate while working, and being a full time student.

“At this point I’m just trying to graduate, to graduate.” She said. Now instead of throwing all of my pain and power into my grades, it’s put into music. And bartending it doesn’t take too much. Especially in place like this where we’re not constantly making cocktails, martinis, intricate drinks. It’s just simple.” With so much on her plate many would wonder how Moen can do it all, and she doesn’t have an answer for them, “I don’t know how I’m doing it, but I’m doing it.”

In the end Liz Moen is by far the brightest star shining in Iowa City right now, but she’s just going with the flow. Whatever happens, happens. The only thing she knows for sure, is that she’ll hold her ground and remember who she is as an artist as her star rises. She says what she’s most weary of as attention accumulates around her are the people in the music industry.

“I’m weary of people, just because I’m a young female, them trying to control me or think “ah just some silly Blonde girl from Iowa with a guitar. I’m not going to let someone take advantage of me just because they think I don’t know what they’re doing. Because maybe I don’t know like what their game is with it, but I want to try and hold my own, and play music I want to play and not try and conform.”

Liz Moen is a bombshell of a woman, ready to master her craft, and take on the music world. If you’d like to hear her killer pipes for yourself, she plays local gigs frequently, including Shorts in downtown Iowa City, from 9-11 p.m. on Sunday nights. She also just recorded a session at Daytrotter, so check that  out as well as her full debut album available for streaming below.