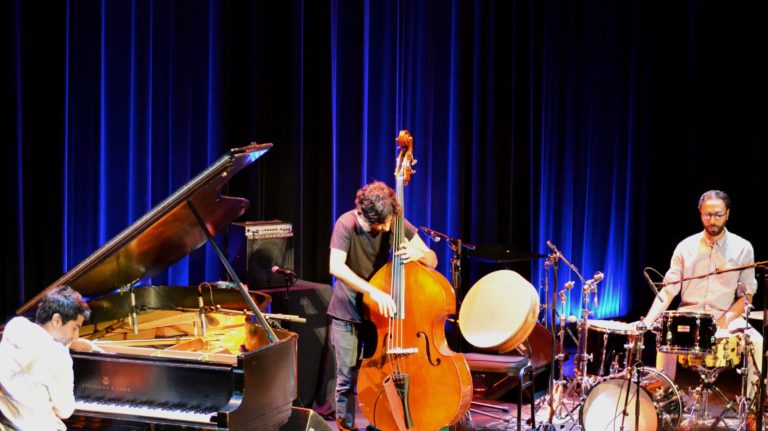 As I sat down in the second row of The Englert awaiting Tyondai Braxton and Dawn of Midi, I had no idea what to expect. I had never heard of either of them, and I was eager to hear something new. And something new was definitely what I got.

I arrived around 6:45, with 15 minutes to spare before the opening act, Tyondai Braxton. I patiently waited until the house lights dimmed down at 7 and Tyondai came out. Tyondai, a tall and tanned man with a curly afro, gave a shy wave and headed to his safe haven that was his equipment. A single laptop, a keyboard, and tons of cables sat in front of him as he towered over it. Red and white lights shone down on him as he started to play.

Silence hung in the air for a brief moment as he stared down at the table in front of him. The music started up, a slow beat at first. It sounded like the bass that builds up the anticipation in a movie, or like the sound of an airplane when it fires up.

More futuristic sounds were crescendoed in soon after, and the bass kept building up. He stared down with determined eyes at the table, bobbing his head to the music. To me, it kind of sounded like a never ending EDM ringtone that kept changing beats. I was able to identify some more unpleasant sounds, like tires squeaking on cement, or when people drag their feet on the ground, or high pitched ringing. At one point I could even feel myself cringing and my toes curling.

It sounded almost as if it wants to be like catchy club music, but it’s too quirky to be with its incorporation of maracas and bird chirping. It was easy to tell that Tyondai must take a lot of inspiration from his environment, considering the sounds he’s able to produce are familiar and identifiable. The music always mellowed out, going into a lull before transitioning into another song, making it an hour straight that he played for.

He bobbed his head, occasionally looking up at his laptop but never looking at the crowd. When he bobbed his head, he was looking straight down at the table as if the audience wasn’t even there. I looked over the crowd to see people sitting with their hands propping up their faces, and some people relaxing. I felt slightly awkward just sitting there and watching him, considering I’ve never been to a show where the musician never did any talking. But he was doing his thing, which made me feel less awkward and more comfortable to be there.

It was almost abruptly that his music faded and a yellow light was cast upon him at 7:57 pm. He gave his hand up in a wave and said “Thank you,” as the audience clapped. He walked off the stage before shortly returning to help clear his things.

The wait for Dawn of Midi was roughly a half hour, which wasn’t too bad. The trio based in Brooklyn walked on stage, waving at the audience before taking their places behind a grand piano, a cello, and drums. The red and white lights along with some fog were back for them. They tuned their instruments, and after a while that turned into them playing their songs.

Dawn of Midi has a lot more of an acoustic vibe to their music as opposed to Tyondai. They take a lot more of their rhythmic structures from North and West African folk traditions, making the vibe in the room calm and mellow. Their music stayed consistent, never really  building to much or having any huge bass drops like Tyondai. It sounded more like a film score, something that you could just sit back and enjoy. It felt more organized than Tyondai, who had random sounds here and there. In my opinion, it was a lot more enjoyable for me to listen to Dawn of Midi for their relaxed tones.

A keyboard solo takes off as the cellist shakes his hand off. The drummer bows his head down and keeps time by bobbing his leg up and down.

After a while, it was kind of boring to watch. That was when I looked behind me and saw that a lot of people had rested their eyes. Again, I felt awkward: is that normal at shows like this? Or is that rude? To the people’s defense, the music could put me right to sleep. It was a beautiful sound and very lulling. I decided to close my eyes too and let the music take me to a different place.

I felt relaxed and at ease as the music flowed through my body. I opened my eyes again and this time focused on the pianist, who had his eyes closed and was bobbing his head from side to side. Each of the musicians seemed to be in a trance, and it was inspiring to see them perform a different style of music.

Their time came to leave and I felt more relaxed than when I had gotten there. The chilly air hit my face as I left The Englert, and I didn’t even flinch.

Would I listen to their music in my down time? Probably as background noise when I study. But would I like to see them again? No, probably not. As much as I enjoyed their music, it wasn’t a concert that I felt had a lot of stage presence. With their type of music, there is no desire to see them live as there is for my favorite bands. Nonetheless, I appreciated their music.