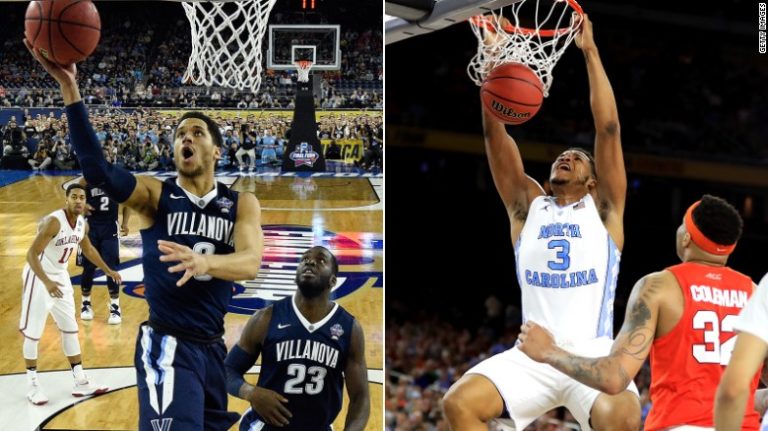 Like every year, March Madness has torn fans hearts apart and made others elated beyond belief. After three weeks of madness the tournament will give fans one more roller coaster of emotion tonight in the national championship showdown with No. 2 Villanova facing No. 1 North Carolina.

The Tar Heels are slightly favored in this game but when looking at each of the teams tournament runs with a plain eye, the Wildcat’s streak has come along with defeating multiple championship contenders.

Villanova has put their toe on the gas all tournament long by wiping the floor with UNC-Asheville in the first round, then moving on to embarrass the Iowa Hawkeyes and Miami Hurricanes by at least 19-point margins in each game. Their national championship game destiny continued by clinching a nail-bitter against the heavily favored Kansas Jayhawks, the Wildcats secured the game with a crucial steal in the last seconds.

Jay Wright and the cats continued their momentum in the final four by routing Oklahoma with a 40 point margin in arguably one of the worst showings in tournament history. Compared to the North Carolina’s tournament resume of getting past FGCU, Providence, Indiana, Notre Dame and Syracuse, some would strongly argue that the Wildcats road to this glorious final game proved to be more difficult.

Looking at history though, the big dance doesn’t pay favorites to anyone, no matter how difficult the path.

The Wildcats are underdogs again going into tonight as they seek their second national championship, while the Tar Heels will be looking for their sixth. North Carolina’s last championship came in 2009 against Michigan State and coincidentally defeated Villanova as well on their road to the title. Villanova’s last title win came as an No.8 seed in a win over No. 1 Georgetown, 66-64.

“Our main goal is to play goal to what we played tonight, get the ball inside, really try to pound it in there and knock down our free throws,” said Tar Heel Kennedy Meeks in the post-game conference vs. Oklahoma according to ESPN.

Granted this Roy Williams coached team has beaten everyone they have faced this tournament by average of 16.2 points per game but the Wildcats have been shooting lights out and making history in the process. Villanova shot 71.4 percent from the field against Oklahoma which happened to go down as the second best percentage in Final Four games. Coincidentally the only team to put up a better percentage than that was the 1985 Villanova championship team.

Controlling the tempo to which their team generally plays at will be a pivotal factor in tonight’s game. North Carolina was able to do that successfully against Oklahoma by shutting down nation’s top player, Buddy Hield.

“They want to play more of a slow-paced game and we always want to play up-tempo,” UNC guard Joel Berry said. “We want to penetrate and beat the defense down before they can set up their defense.”

The matchup is set to kickoff off at 8:19 p.m. central time on TBS at the NRG Stadium in Houston, Texas. Jim Nantz, Bill Rafterty, Grant Hill and Tracy Wolfson will all be broadcasting the game. Be sure to tune-in.