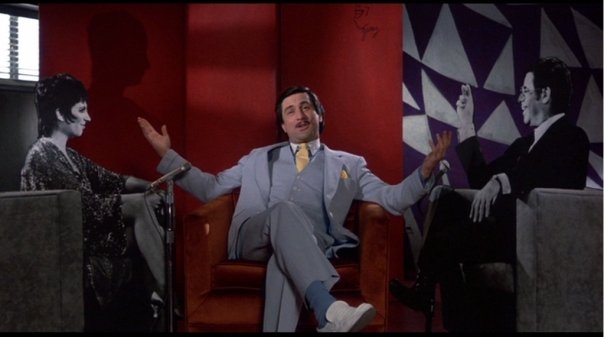 Martin Scorsese may be best known for a particular tone or feeling in his films.

He garnered, and to a large extent still does, a certain cult following to his films, which are also heaped with critical praise. Tarantino has followed a similar path, creating a certain kind of unique cinematic style that simultaneously enraptures college boys and impresses film critics. Scorsese’s films are often filled with coarse language, the glitz and glamour of the criminal underworld, hyper-masculine performances, excess, emotion-driven storytelling, and moments of extreme and cathartic violence.

However, Scorsese offered a rather different filmic experience with one of his lesser known works; 1982’s The King of Comedy. When it was first released, it was met with general confusion and dislike. People didn’t quite understand what the film was trying to do, especially considering its director, who had previously released films like Mean Streets, Taxi Driver, and Raging Bull.

This confusion is certainly understandable; The King of Comedy is a black comedy, but it elicits more cringe than laughter. It is not a particularly enjoyable viewing experience, and it is filled with moments of acutely painful awkwardness. That being said, it is still a masterfully-made film, and it remains one of Scorsese’s most under-appreciated works.

The King of Comedy follows Rupert Pupkin, played to perfection by Robert De Niro. Rupert is a lonely and potentially disturbed man who is fixated on the idea of “making it big” in the comedy world. The fact that he has never performed for an audience is no detriment to him, and when he annoys famous TV show host Jerry Langford to the point harassment, he sees it as his big break. Unfortunately, Rupert is unable to take the innumerable hints that are given to him that his dream is a bust, and when reality finally hits, he decides to take matters into his own hands.

Robert De Niro gives an incredible performance in this film. While Scorsese’s other collaborations (Taxi Driver, Raging Bull, Casino, Goodfellas, Mean Streets) with the actor may receive more praise, I firmly believe this is some of the duo’s best work together. De Niro gives a brilliantly understated performance, and one that is so relatable at the beginning of the film. This room for identification is exactly what makes his break from reality so deeply unsettling for the audience to watch. At what point can they break away? At what point has Rupert finally gone too far, to the point where he is no longer a subject for identification for the audience?

This is another reason why The King of Comedy is so great, and so unique. It may technically be called a black comedy, but it doesn’t have the usual sense of laughing at something rather morbid. The laughs aren’t brought on from slapstick violence, one-liners, or clever word-play. In fact, there really aren’t many laughs to be had at all. Instead, the audience is forced to squirm in their chairs through long scenes of painful awkwardness. And these tense and languishing moments drag on and on without any release. This is a particularly interesting facet of a film directed by someone like Scorsese. Nothing every boils over, there is no moment of cathartic release. Instead, the film smolders and constricts on the audience, never allowing for a moment of true relief.

The King of Comedy is available for download here. Check out a trailer for the film below: