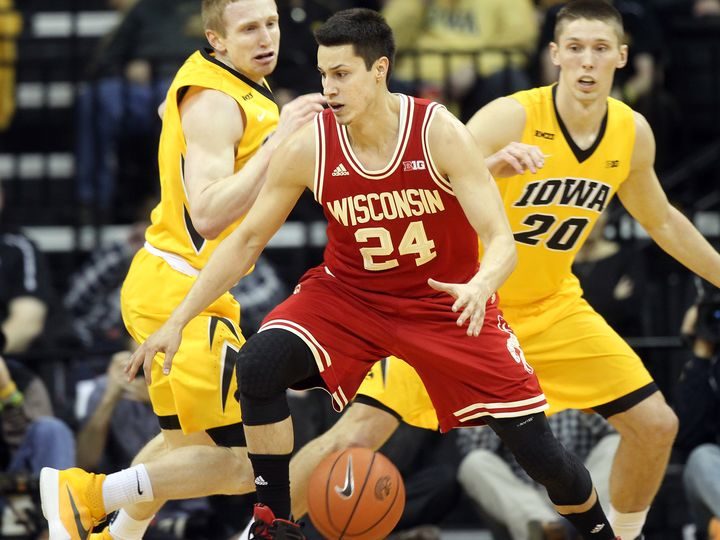 A week off was supposed to be time for the Iowa men’s basketball to recollect gather their thoughts after their worst loss of the season at Penn State.

Despite some bright spots, the struggles continued for Fran McCaffrey and company as they welcomed one of the hottest teams in the Big Ten into Carver-Hawkeye Arena.When all was said and done, the Badgers (18-10, 10-5) escaped Iowa City with a 67-59 win over the Hawkeyes (20-7, 11-4)

This is Wisconsin’s third win against a top ten team this season. The other two came against fourth ranked Michigan State at home back on January 17th and at second ranked Maryland back on February 14th.

It is the first time since 1955 that the Badgers have two road wins against a top ten team. Wisconsin now has won nine of their last ten games, and they have another impressive win to add to their resume come Selection Sunday.

For Iowa, the issues that plagued them during their swoon has been the productivity of the bench and their team perimeter defense.

The bench only contributed four points compared to the starters 55. Dom Uhl and Nicholas Baer were the two players for Iowa who played more than five minutes off the bench.

For how good the bench played earlier in the season and extended leads instead of holding on for dear life until the starters got back, this has become a major concern for Fran McCaffery and the Iowa coaching staff.

Three of Iowa’s five starters played over 33 minutes, including 34 minutes from both Adam Woodbury and Anthony Clemmons. Woodbury set a new career-high with 18 rebounds, 10 of them on the offensive end, to go along with six points.

Peter Jok paced Iowa with 21 points with 17 of those coming in the first half. The starters combined to shoot 16-47 from the field, which is just a shade over 34%. Iowa missed a lot of open layups and had a lot of second and third opportunities on numerous possessions due to an 18-7 advantage on the offensive glass.

Anthony Clemmons and Jarrod Uthoff were the other two Hawkeyes in double figures with 13 and 11 respectively.

“We just got a little hesitant at times. Woody did a nice job of going back and getting us some extra opportunities, and Pete just got tired.”

Iowa had 14 turnovers as a team, which McCaffery said was way too much for his team.

Outside of the first couple minutes, the game was played at Wisconsin’s pace. They like to slow the pace of games down and not let teams get out in transition.

At the end of the day, teams that make timely shots and gets solid, all-around production usually wins their fair share of games. That is the difference between Iowa and Wisconsin right now.

The Hawkeyes now have a few days to prepare for their next game on Sunday afternoon at Ohio State. The Buckeyes, who are coming off an 81-62 loss at home to Michigan State, are 10-6 in the conference and a game and a half behind Iowa in the standings.

“We’ve got a great season going. It’s not time to cave in and throw the towel in. We’ve got more season to play,” Adam Woodbury said.