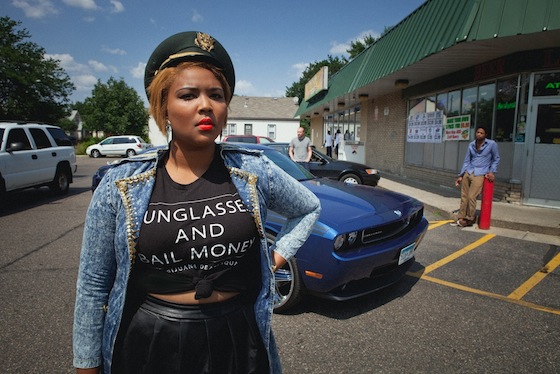 A year ago, I arrived in Omaha, Nebraska for a reunion tour that fans never thought would happen. Sleater Kinney was returning to the scene. The opener had not been given much thought, on mine or my company’s end, considering the monumental head-liner. However, the wait outside of the venue caused curiosity due to the thumping bass and commotion of a sound-check inside.

The first entrance on stage was a contributor, and DJ, to Lizzo’s act: Sophia Eris. She came out wearing a Riot Grrl hat and prepared the crowd for a mind-blowing performance of hip hop and intersectional feminism. The former seems strangely associated with a Sleater Kinney show, but the stance that night was in both acts: intersectional girl power.

Since this performance, Lizzo has released her newest album: “Big GRRRL Small World.” This title encompasses Lizzo’s self-identity: a big girl in a small world. She’s an incredible body-positive feminist that comments on race, gender, and politics in nearly every song. Her talent and image have caught the eyes of massive names in the world of hip hop including, but not limited to, Prince and Andre 3000. Even though I could go on for hours about the accomplishments and my immense appreciation for this woman, her album speaks for itself.

I’ve listened to past songs of Lizzo’s and this opening number somehow incorporates every type of sound and rhythm of beats that she has utilized in past tracks. This is a song that could be danced to but is fitting for a listen on a couch. That being said, I don’t like it as the opening song. It’s fantastic. It’s great. However, it doesn’t knock me down as I expected of her opener.

If you follow my album reviews, then you will find that I hate repetition. It is my least favorite aspect of this song. I still don’t dislike the song itself though. I am aware and can appreciate the fact that the repeated word, “betcha,” is producing a sound that contributes to the rhythmic patterns. These beats are always innovative and refreshing, which could be said for every song of Lizzo’s.

Ride begins ominously and funky, creating a feel for dance more so than preceding songs. Her self-confidence fills her lyrics in every track, but it’s still surprising and refreshing when it’s so apparent. However, once again, repetition rears its annoying head. Perhaps my mention of repetition is getting repetitive?

The half-time beat is something I love and admire in hip hop. So far, in my listening experience, this is my favorite song. I haven’t heard this style in a lot of Lizzo’s music but I love this.

She opens the song with one of my favorite songs of hers, Paris at Night. Naturally, that makes me predisposed to enjoying this one. Therefore, I take it back; this one is my favorite track from the album. This track showcases her rapping abilities while you could easily dance along. I don’t like the ending though. This strange electronic ballad is excruciating. The autotune is awful. The rain in the last seconds would have been more suitable for the previous ballad, Humanize.

Lizzo can rap, there’s no doubt about that. B.G.S.W. showcases her rapping ability more so than the musicality of the song. The beat’s still there obviously but it’s rather simple. The difference of producers in the songs is demonstrative in the use of autotune and simplicity–which is the case in this one because it’s a different producer than the previous ones.

There’s a different producer for The Fade but with a similar style of the previous song. There’s a showcase of her rap abilities with a heavier beat.

The most poignant lyric: “What happen to a daddy girl when daddy don’t exist no more?” I felt sadder and more connected to Lizzo than I have before. This song is more personal than any I’ve heard by her. I felt it was reminiscent of a heavier song of hers that I saw during her opening for Sleater Kinney about racial inequality that included an excerpt from an MLK speech.

I’ve been trying to figure out my aversion to this song. I think I just typically enjoy songs that don’t include so much obvious autotune and that make me feel like dancing. However, Lizzo does sing more so in this song than in others.

If you’re looking for the body-positivity in Lizzo’s music, this is the quintessential example. My favorite and repeated lyric: “I think I’m in love…with myself.” It does what All About that Bass does without being exclusionary of a specific body-type. I’m looking at you, Meghan Trainor. I love this song. I feel I could hear it in a club and it makes me want to go to one. The break down in the end is perfect.

Self-love and body positivity are central. “I woke up in this, my skin.” Lizzo also specifically calls out, “my brown skin.” She introduces the racial tensions that permeate all cultures. She recently released a video for this song, watch it below:

Racial tensions are at the forefront for this finale. From Lizzo’s social justice standpoint, she comments on the movements she participates in. In this way, it’s perfect for the final touch. She raps about cultural appropriation and the white fascination with black culture, specifically hair.

If you’d like to listen to Lizzo’s album “Big GRRRL Small World,” the full thing is on SoundCloud: