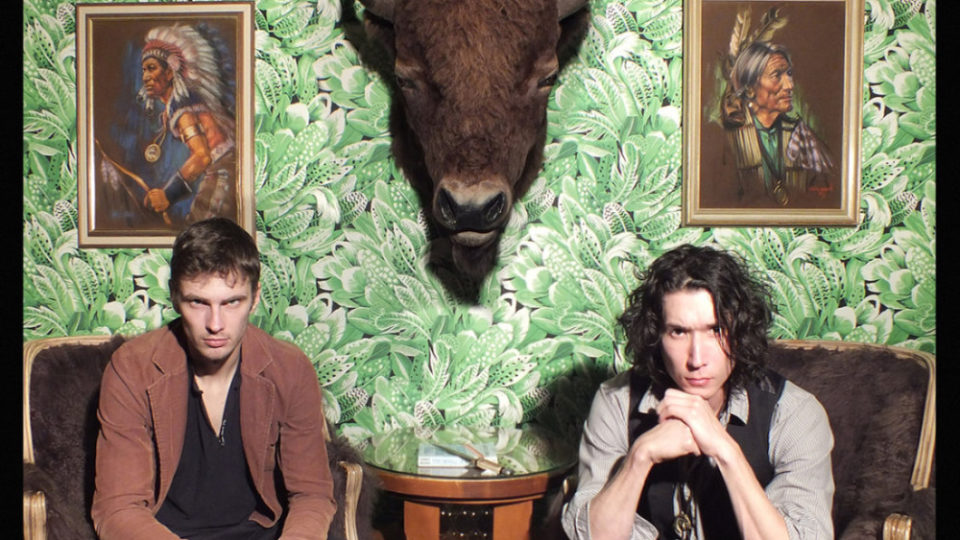 The Echo and The Sound is made up of Brain Rich, who does vocals and guitar as well of as member Douglas Jewell who plays drums. My guess is that Rich is The Echo while Jewell is The Sound, however since they don’t exactly say who is who, it’s open to interpretation. They are based out of Los Angeles, California and their style of music ranges from punk-rock, blues-folk undertones, country-esque, and gothic cantina style. The EP has a sense of urgency and a strong sense of passion.

“Buffalo Mouth” is the third EP that The Echo and The Sound have released. However they call it a double EP because it has 4 tracks from their 2014 EP titled “It’s Execution” and it also features 8 brand new songs.

The first song on the album is “Weapons of Influence.” The song falls more into the category of punk rock. The first beats on the track make you want to get up and rage out. While the lyrics are hard to understand, the loudness and sharpness of the instruments makes up for it. It’s no wonder why The Echo and The Sound decided to bring forward this song from their previous EP.

“Who Says” is the second song on the EP and has a similar sound to the first song, however its not as rageful as its predecessor.”Virginia Law” is a mix of blues and punk. The two genres mix well together and the song makes you want to bounce along to the beat.

“The Devil Wears Green Eyes Twice” is the second song transferred from the 2014 EP and it’s a good thing they put it on this one as well because it makes you want to rock out. The lyrics are easier to understand than the previous songs but it’s one of the better songs on the EP.

“Louder Now” lives up to its name. This track is louder and more rock-esque than all the previous songs. It makes you want to get up and dance. Plus, I’m pretty sure it says a few cuss words like every 3 seconds.

“Murderer of One” is also on the last EP and the song starts out as the rest have: with a loud beat. However this song drops the faster tempo. Brian Rich makes his voice sound creepy and deep and it totally works. His vocals and the slower beat gave me chills. “Alice” is similar to its predecessor in the fact that it has a slower beat. The song is just as creepy as the previous one and Rich continues to have his creepy deep voice which makes the combination of a slow deep voice and a slow tempo work.

“One Trick Pony” is the last song that is brought over from their previous EP. It starts start out with a slow but rock beat. It continues this similar beat throughout the song. Rich’s voice is still sort of deep but his creepy factor is gone and it works for this song.

“War on Error” is all about Jewell. His drums start off the song and his drumming is emphasized more in this song than any other track.  “Under the Sun” continues with the slower beats. Rich makes his voice deep again with an inkling of the creepy voice he had before. The tempo and voice match perfectly and make for an interesting song.

“One Last Midnight” has that usual rock sound. Rich’s voice matches perfectly with the track as he doesn’t make it extremely deep or extremely high. “Black & Gold” is fast tempo compared to the few previous that had come before it. It has the similar fast tempo and punk rock feeling that the first few songs displayed. It’s a perfect finisher for “Buffalo Mouth,” even though I still don’t understand why they called it that.

Check out The Echo and The Sound on Facebook.

If you liked the 4 songs from the previous EP, then listen to that EP here.