As the days have become colder and skies often covered by rain clouds, it has become more and more difficult to find those in Iowa City who are willing to be observed. I’ve found that the best areas to search are often out in the open. People are more willing to speak when they aren’t confined by walls or other obligations.

Simply because it isn’t reasonable or realistic that people would be sitting out in the cold and wet, I have had to look to the indoors. On a particular adventure into the lobby of Burge Residence Hall, I found Molly.

When I first approached Molly, she was hesitant to answer my questions. She appeared busy on her laptop and wary of the stranger who suddenly asked to take her picture. 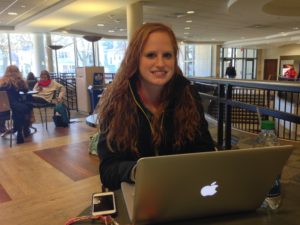 I could tell right away that Molly was someone who got stuff done. Molly didn’t seem like the type to sit down and let life take advantage of her. I later found this to be true, as she told me that in the last week she had turned in four papers and taken a test on top of that.

I also learned from our conversation that Molly is in the same boat as a lot of us– still trying to figure things out. As a sophomore at the University of Iowa, she has decided to drop a journalism major and venture into a differing field.

“I was a double major in journalism and communications, but journalism isn’t really my thing,” Molly told me, “I’m thinking of going into some sort of marketing instead.”

Molly is a prime example of a University of Iowa student– trying to decide what the hell she’s doing with her life, weighted down by homework, and probably sleep-deprived. In fact, when I asked Molly what she was excited for, she replied, “I’m pretty excited to sleep.”

We get it, Molly. Thanks for sharing, and go take a nap.