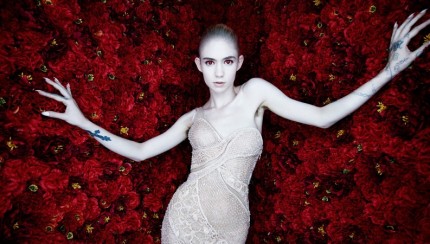 Move over, Sailor Moon. There’s a new anime magical girl in town and she is taking names and giving zero f**** about your ideas of a female pop star, or just a pop star, or just an artist in general. This is Grimes we’re talking about, and welcome to the technicolor, out of this universe world of Art Angels.

Let’s back up a moment. A native of Vancouver, British Columbia, Grimes (born Claire Boucher) started gaining traction and attention for her homemade music on indie music blogs while she was attending college to study neuroscience. Ultimately expelled because of her lack of attendance attributed to her progressive dive into the soundscapes she had become so enraptured with, Grimes released two albums (one of which, Geidi Primes, heavily referenced the science fiction novel classic Dune) before signing onto the record label 4AD with a recording contract.

Sharing a label with such acts as Bon Iver, Camera Obscura, and other front runners of the experimental pop genre such as Purity Ring, Grimes had immense amounts of hype to live up to as her major label debut, Visions, neared its eminent release. When it hit shelves in the winter months of early 2012, Visions was met with near critical acclaim: “ambitious”, “inventive”, and “intoxicating” are just a few of the key words used to describe Grimes’ watershed album. Deftly melding dream pop, ’80s influences, synthwave, and the ridiculously titled witch house genre, Visions and its singles “Genesis” and “Oblivion” continued to gain praise. “Oblivion” was selected by Pitchfork Media as the best song of the decade so far.

Despite all of this, though, Grimes seemingly disappeared.

Having dealt with internet and press haters, Grimes scrapped an entire album’s worth of material that was constructed around the sound of her under-appreciated hit “Go,” and withdrew from the media and blog spotlight for close to three years. Despite this, Grimes has returned triumphantly with Art Angels, and let me tell you, all the time waited was worth it.

Taking cues from the ’90s, like she did with the ’80s for Visions, Grimes crafts a collection of songs that feel cohesive, engaging, and alternatively beautiful and challenging. Garage rock guitars are now spliced into the DNA of most of the tracks. A sense of grungy urgency carries the songs as they race through highs and lows, synths grounded by the more organic sounds Grimes utilizes. While the songs aren’t conventionally structured, they do fit into a more pop-like feel.

All the while, the genre is complemented by our magical anime girl’s fantastic vocals: they soar to effervescent heights (bubbly and bright on the title track and “World Princess, Pt. II) and huskier, subtle tones (the chorus of album highlight and first single “Flesh Without Blood” and shining moments on “Belly of the Beat”).

Despite this accessibility, though, Grimes isn’t afraid to throw the curve-balls that we’ve come to know (and love) her for: early track “Scream” features a Taiwanese rapper nearly exclusively, except for Grimes’ own screams acting as breaks between the rapid fire verses. Album centerpiece “Kill V. Maim”, while a downright banger on the surface, “[is] written from the perspective of Al Pacino in The Godfather Pt 2. Except he’s a vampire who can switch gender and travel through space”, according to the singer, and she’s still somehow able to pull it off effortlessly.

On my first listen of Art Angels, I didn’t like it as much as Visions. Dark and swirling and often times menacing, Visions swathed itself in monochromes and dreams and science-fiction inspiration. If there could be an anime equivalent to it (as Grimes is known to love anime), the philosophical and post-apocalyptic Neon Genesis Evangelion comes to mind. Art Angels, however, works in brighter hues and dance-floor aspirations while still managing to be subversive of the pop genre. Art Angels is the Kill la Kill (an excellent series that critiques and homages magical girl anime) of the audio world. Grimes has created two exemplary and subversive albums, all on her own terms.

Grimes is the pop auteur of the year, and Art Angels is an experience you won’t want to miss.

Art Angels can be listened to on Spotify here.