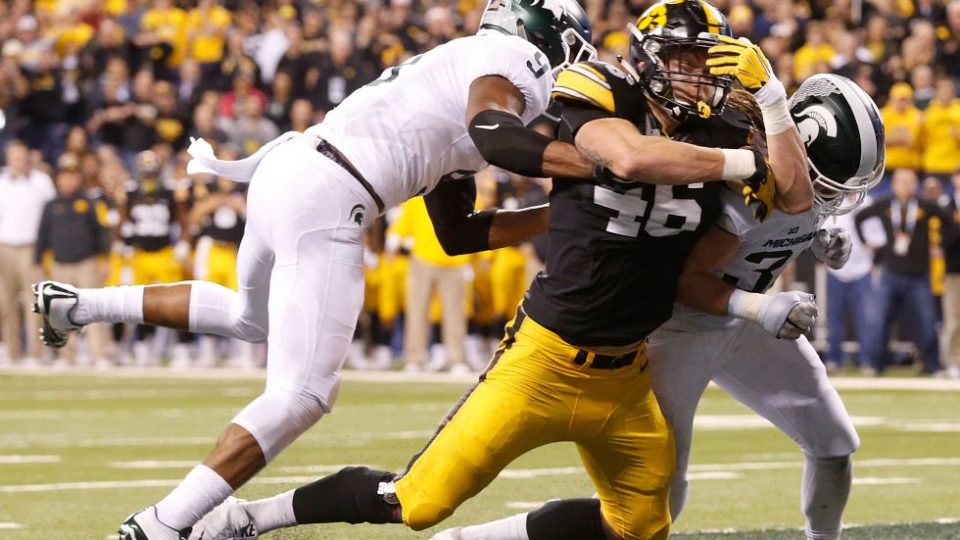 INDIANAPOLIS- It was a classic Big Ten defensive slugfest between the Michigan State Spartans and the Iowa Hawkeyes inside Lucas Oil Stadium in what was essentially a national quarterfinal for the right to participate in the College Football Playoff.

Unfortunately for the Iowa Hawkeyes (12-1), their road to a perfect season and a playoff berth came to a screeching halt courtesy of a 22 play, 82-yard touchdown drive punctuated by an L.J. Scott 1-yard touchdown run that took 9:04 off the clock and gave Michigan State (12-1) their second Big Ten championship in three years with a 16-13 win over the Hawkeyes.

The first saw early mistakes on both sides turned into points. On Iowa’s third play from scrimmage, a connection from quarterback C.J. Beathard to tight end Henry Kreiger Coble went from an eight yard completion to a fumble recovery by the Michigan State defense deep in Iowa territory. The Spartans turned that turnover into a 23-yard field goal from Michael Geiger to give Michigan State a 3-0 lead.

On Michigan State’s next possession, quarterback Connor Cook saw a pass go awry and Iowa linebacker Josey Jewell intercepted the senior quarterback deep in Michigan State territory. The Hawkeyes, like their counterparts, turned their turnover into a Marshall Koehn 24-yard field goal and a tie game after a quarter.

Iowa added another field goal from the Solon, IA, native in Koehn to give Iowa a 6-3 lead at recess.

The common themes for Iowa were missed opportunities in the red zone and settling for field goals, as well as poor success on third down conversions keeping the defense on the field for nearly eighty percent of the second half. Michigan State had possession of the football for nearly 23 of the 30 minutes in the second half, and they took full advantage of an exhausted Iowa defense down the stretch.

The one big play on offense from Iowa came on an 85-yard touchdown connection from C.J. Beathard to senior wide receiver Tevaun Smith 11 seconds into the fourth quarter to give Iowa back a lead they eventually relinquish at 13-9.

After the teams traded off punts, it was Michigan State’s drive that will live in infamy in East Lansing that ripped the hearts out of nearly 40,000 Hawkeye fans who made the trip and left to pick up the pieces after a heartbreaking defeat.

The drive ultimately gave the Spartans and head coach Mark Dantonio the conference championship they coveted, and the playoff spot that comes with it.

In Iowa’s case, there are multiple options as to where they be playing a bowl game in either late December or early January. It is likely to come down to either the Rose Bowl against Stanford, the Fiesta Bowl, or the Peach Bowl. We will know for sure later today when all the bowls will be announced to the public and the planning and preparation will begin in earnest for wherever Iowa will close out their outstanding season.